[Enough for today and post closed, things to do, Part 4 tomorrow, peace and, God bless your sound(s) and vision(s) –ing. Out on: Video of the Decade, it'll be a dance one.

Please note, linked on Bags of Playlists, Judge Nap. saying he believes "he's", [Michael Jackson] "profoundly guilty, but...", in answering, Benjamin Netanyahu. His one question, when bumping into each other at an airport. Judge Nap's 'icebreaker', and introduction to Ron.

Or, told him? Or, he's the pro, through and through. Planting seeds. 'Weeds', be told.

Last bit comes from watching Vlad TV. Not that I doubted, but open to the possibility. That from 'the day', might add. Then I read S.Awan's (Burning Blogger of Bedlam) blockbuster article. Available prior to his shutdown on Wordpress.

'We' wrote "don't, know,..." and other incidents not investigated?

Then, I watched a number of interviews on Vlad TV.

Judge Nap's "two sides of Ron's character"? We should, Listen, Up. Libertarian or what you'd reckon better? Regardless, it's what he says about, on the man? Jorges and Ron, Godfathers, and 'faithful to first-principles.' Lord Jamala, as happs. a genuine 'OG' (ex), stepping up, likewise.

And Bill Cosby was guilty of what?, and how many years does he get irrespective of innocence?

The lookers and hearers -and- the 'don't/won't', face; confess; repent.

for di time is nigh
when passion gather high
when di beat jus lash
when di wall mus smash
an di beat will shif
as di culture alltah
when oppression scatah
Linton, 1980.

What about a review of the Vision playlist and write on Coincidence?

What about eh? Coincidence ...and hope, first. Playlist, next. As for C-19? It's about covering-up, and it's about opening up. The revelation of the tyranny we've invited in.

Judy Mikovits is asked what Doctors need to do? Her answer is precise and to the core:

Who wouldn't, when incorrect science and teenager level unreasonable is believed and the damage is the wealth of the nations, premature deaths and suffering on every level.

All because? We don't, or ('Hope') Do, repent. The time of confessing is upon us, hence VladTV, being the broadcast of the day.

What would Judy know?

[Judy Mikovits is an American activist. As research director of a CFS research organization Whittemore Peterson Institute (WPI) from 2006-2011, Mikovits led a research effort that reported in 2009 that a retrovirus known as xenotropic murine leukemia virus-related virus (XMRV) was associated with CFS and may have had a causal role. In 1980, Mikovits was awarded a Bachelor of Science degree in Chemistry with a specialization in biology at the University of Virginia. After graduation, she went to the National Cancer Institute in Frederick, Maryland, where she developed purification methods for Interferon alpha. Mikovits has gained attention on social media for promoting her ideas about the 2019–20 coronavirus pandemic. She does not believe that a vaccine is needed to prevent COVID-19, and claims that the coronavirus was “caused by a bad strain of flu vaccine that was circulating between 2013 and 2015“. She also claimed masks will “activate” the virus and reinfect a mask-wearer over and over.]

When was Bob Dylan a false prophet and what do his latest two releases represent? He considered he was 'prophesying' and it was to crowds, night after night. Embarrassed me around 1992 when I found the tiny book. The same time I found a magazine for the first time, 'Adbusters'. Staple reading until I awoke around 2010. In my local fave bookshop, St. Marks between 2nd and 3rd. The same block written about in Sunday School on Truthscoop, a couple of days ago.

The little books were slotted into the Chick Tract roller-stand. Small pages like a flip-cartoon booklet. Date of concert and Dylan's futurist interpretation of Biblical prophecy. Dylan knew it was time to settle up. Forget 'Rock around the Clock' or 'Anarchy in the UK', or 'Wiley Flow'? The two most important releases in sixty years; Bob Dylan's two confessions. The purpose is to open men and women up to follow the example.

To repeat; the people behind the war we're in, are about revealing and concealing.

Richie Allen to Ole Dammegard, Jim Fetzer to Kevin Barrett for example. In writing, Burning Blogger of Bedlam and Crimes of Empire... see the signs. The seeming haphazard to meticulous attention, revealing the scam.

Not up with all this? Start with Richard D Hall, UK's one-man 'World in Action'/'Panorama' on the scourge of all times. Pirates, Romans, etc.

His investigation into the Joe Cox Assassination, consider to be the best documentary ever made in the U.K. Stated, from a number of standpoints. It's dramatic, and down to earth. I'd try and include the 'additional videos', for if you've not seen it, take your chance? Unless on Vlad TV, that's the one.

Daniel Estulin interviewed by Kevin Barret on The Unz for insider-leaking, informed analysis. What he doesn't discuss are the families behind the couple or so, warring elites. Not that we can discuss, what's to know? Daniel's been at the forefront and the disclosure. The naming. Unmask to cause, or resist?

Over the years, I have come to realize that the greatest trap in our life is not success, popularity, or power, but self-rejection. Success, popularity, and power can indeed present a great temptation, but their seductive quality often comes from the way they are part of the much larger temptation to self-rejection. When we have come to believe in the voices that call us worthless and unlovable, then success, popularity, and power are easily perceived as attractive solutions. The real trap, however, is self-rejection. As soon as someone accuses me or criticizes me, as soon as I am rejected, left alone, or abandoned, I find myself thinking, "Well, that proves once again that I am a nobody." ... [My dark side says,] I am no good... I deserve to be pushed aside, forgotten, rejected, and abandoned. Self-rejection is the greatest enemy of the spiritual life because it contradicts the sacred voice that calls us the "Beloved." Being the Beloved constitutes the core truth of our existence.
― Henri J.M. Nouwen

A bio-weapon and whack a load of us? Still lock-down to increase the problems, but... no revelation and manipulation. No experiment.

Here's some prophecy for you. Seen on m'mate Chris', telly: Sky Arts and a photographer. Spray paint, squatters previous, house in Hungary. Written above the windows: 'You Are In An Experiment'. The view was the local town.

While on it, the meaning of life, is not; it's a 'test from God'. It's there. Seen extreme, and exceptional engagements, Job in scripture, and in our day, Rees Howells.

No, God isn't running a lab or a steeple-chase.

Suggest: Rewind Linton, keep ya ears on that.

Another suggest and Rees. Top book on 'coincidence or what?' 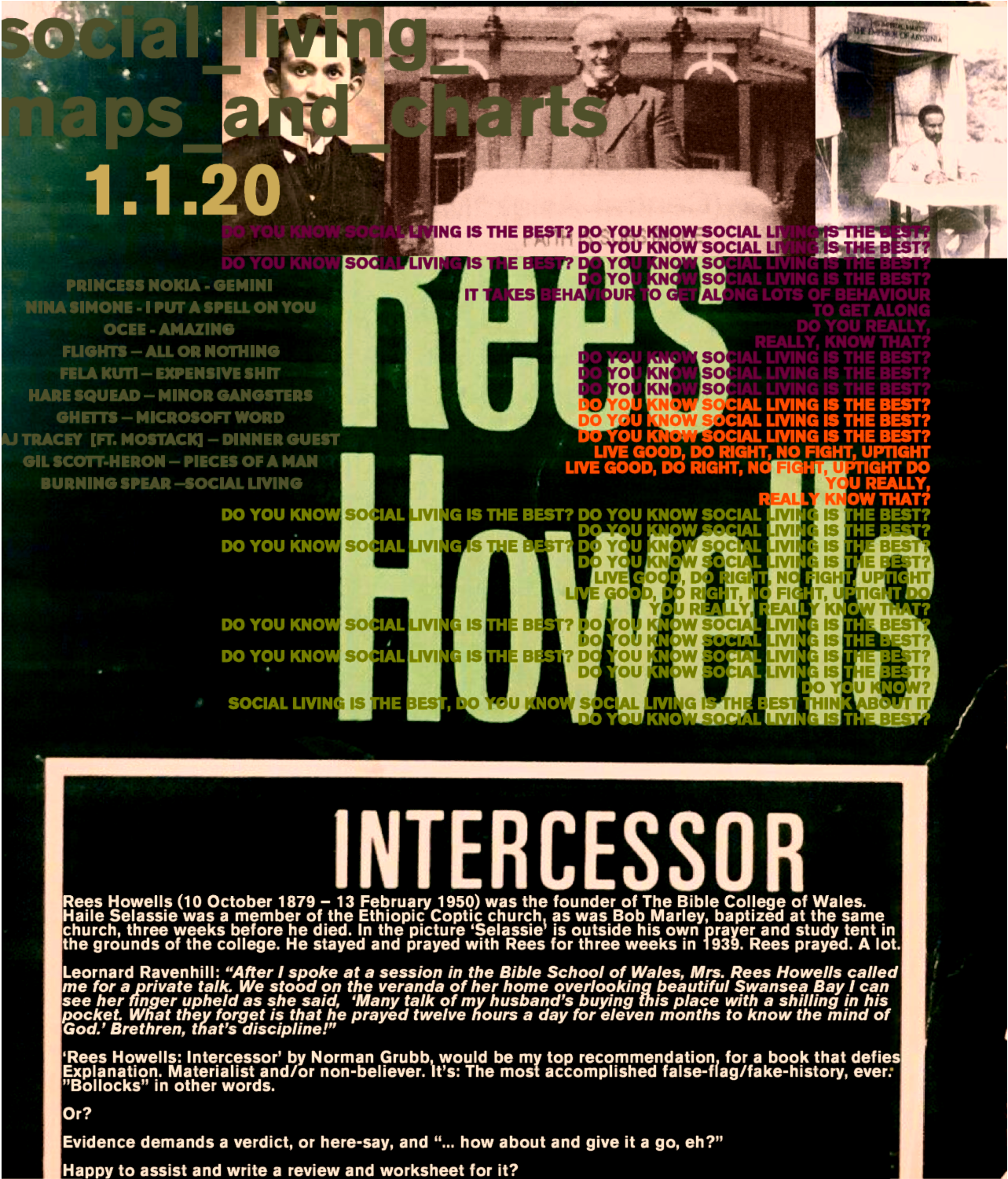 Rewind a dozen, take a break or back to back. Dennis Bovell? WHAT..., a band, and production.

Until the brass plays in your mind when you've nothing playing. 'Silence', aka no chat with peep, or media.

Done about six or so, found the second track on the album in dub. Bass culture the opener. Next the 'one and only', original rap; 'Street 66'. Dubwise.

I'd get on, once once the twelve completed. Second six are the best.

It is now plainly evident that science has become the religion of our times, the one that humans believe they believe in. In the modern west, three great systems of faith have coexisted, and to some extent continue to coexist—Christianity, capitalism, and science. In the history of modernity, these three “religions” have intersected a number of times, occasionally coming into conflict before reconciling in one way or another, gradually finding a kind of peaceable and sensible coexistence, if not a real and proper alliance in the name of common interest.

See... I can go to my, 'two or three' [websites I view], and post-here without reading the article first. Not, that I might disagree with the person who runs it/and volunteers, who do. I trust, The Saker, this man. We've had a couple of short bursts of correspondence, some time back. To encourage, share a laugh and add a thought. Yes, we have theological differences but alongside Paul Craig Roberts? Enough for me. Both have read and thanked me for the pieces I wrote. Had said do a few comments on old truthscoop posts. When can, "God... willin".

Later, on. Do something. In case you're wondering about the Lord Jamar video? Press through what might not appear interesting. In the exchange and 'hypotheticals' is a freedom we must hold on, pull back and get to... freedom in public discourse. Aim to comment later about the chat and scoot through on the vision, ten bag.

['Christian Music' makes no sense. Perhaps say, Bach, not even, Non-sense and knowing the 'scene' and history? How about this song and singer, our man and music-credibility? Or mighty, Yabby You, in Jamaica.

Seen Bruce a number of times, not least at 'Greenbelt'. Exception? Bro. C., and "Christian Music". Perfect pitch all ways. Struggle and paradox. Our personal conscience or conviction.

Clapton said, "...it's Prince", the best and twang-twang. How about my man? Hendrix top, o 'course. Joe Shaw, Doll by Doll, next. Put Cockburn third, any day.]

Mike Whitney gives a "big-up" to Peter Hitchens from May 23rd. 'Well put. Bravo, Peter Hitchens!' Republishes, highlights the following in the quote.:

We have become muzzled, mouthless, voiceless, humiliated, regimented prisoners, shuffling about at the command of others, stopping when told to stop, moving when told to move, shouted at by jacks-in-office against whom we have no appeal. We are learning, during this induction period, to do what we are told and to become obedient, servile citizens of a new authoritarian State. We are unlearning the old rules of freedom.

We will never get out of this now. It will go on for ever. We will not be free people again.
Even when we seem to be free we will be like prisoners on parole, who can be snatched back to their cells at a moment’s notice.

25 May 2020 12:51 PM
My Latest Conversation on the Virus Panic (and on Dominic Cummings) with Mike Graham on Talk Radio.

Peter quoted Reagan from the following clip on his Sky interview over the weekend. A clip recently posted here, c/o an 'Aangirfan' prompt, although it's one I know well. The particular clip was removed form a recent Sunday School post.

Couldn't work out which post and deleted vid., it's on. The quote is quoted here: plantaseed.org.uk/whose-taking-the-offering. 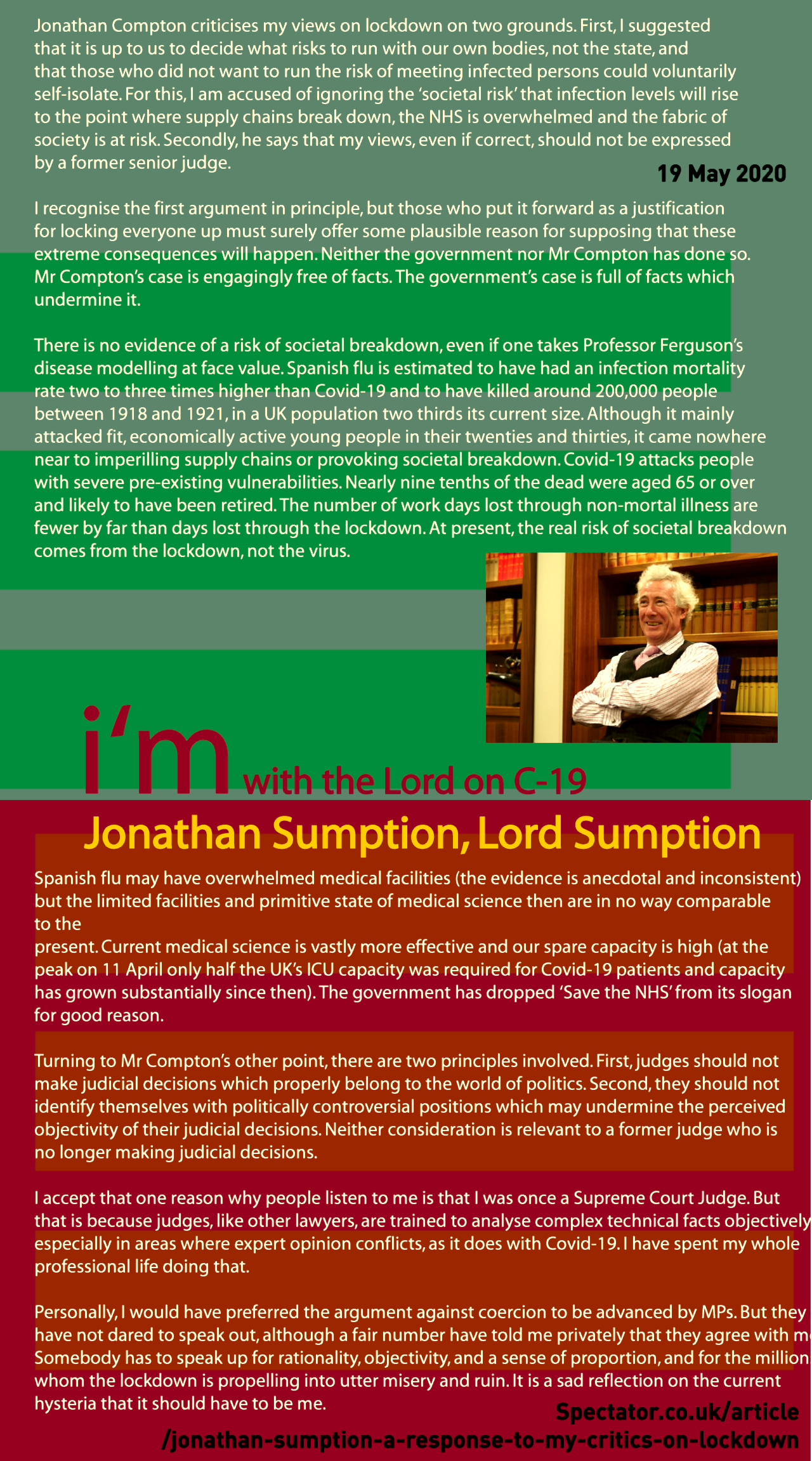