A Confession Of Faith 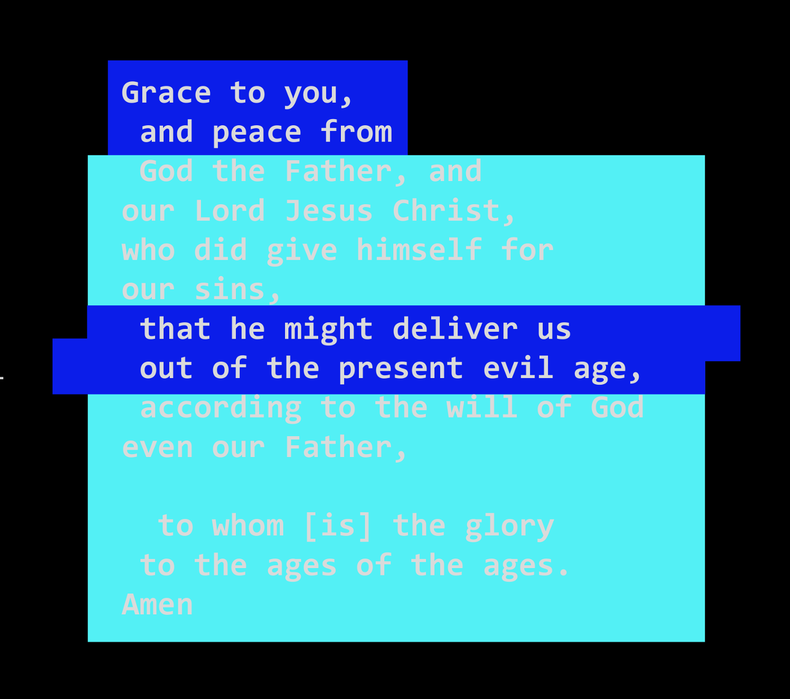 Who is talking to who? And for what purpose? We're on this global mess and on the way to… (not inclined to put a question mark/one reason I type here, is to see God manage to put the breaks on).

We're here and this? Because we're; 1. selfish and stupid. 2. despairing and divided, (those A-wake, referring to).

Nothing to do with agreeing perspectives but – back to (1.) – relational issues. 3. Paradoxically, regardless of talking rightly about 'the dreadful few', the we who-know and care to speak out, 'we're' the problem/solution/reaction that matters. In other words, we hold the keys, the power, the means necessary – but this'll take 'our' repentance/change of mind.

Calling on 'them' to, is all a bit whistling…

We, have to become to overcome. And, as/while, Truthing is as easily practically possible – we, need become or see emerge, a new breed of happy to be gracious warriors.

And listening to two or three youtube-makers recently, been so heartened in their attitude, a) towards those who criticise them, and b) handling mistakes they've made.

Mature attitudes, that see the right necessitates, over the indulgence to preen.

Facing disagreement? Who can, who will – and really talk some shaping for better?

Perhaps only marathon failures like myself, while enduring such long-term offensive behaviour, is what affords me the opportunity to not be concerned about error and be as all un-offendable.

Or, perhaps it's all miraculous grace? Paul here, in an early to-Galatians letter/passage, talks of walking in this 'grace' or being about 'another Gospel'. In context, the Gnostic opp. but talking prophetic – the inability to grasp; God is for rescuing. People. Not all for and about the next life. (For those promise-receiving and the hopeful those not-yet but somehow have/God can/God will…)

No rescuing from 'the present evil age' has now arrived at a 'God's plans defying time'.

The struggle to survive has become all-our-troubles. No island escape. Those elite town-size bunkers aren't going to be deep and secure enough even/because.

No best-declared, Gospel's fulfillment. But God… is about some-level of rescue.

And the essential missing link is for some (of us) to get apart and pray this one through. There be, if ever, an understatement.

Here's some theory and as per usual – better to pray than type (although better to type than read/read/watch/read… etc etc):

Liberal Christians see 'certainty' the other-side to 'faith'. For evangelicals, (traditional and zealous ones), it's doubt. For my prophetic purposes it's 'lies'. Not even deception (more hidden lies) but somewhat, self-disclosing, lies. Sufficient to cover the purpose and deceive but with unnecessary giveaways to ensure some know the sick coo. With blindness mass-overall deepening.

An exercise in demon-calling faith.

(The 'what' God is going to rescue us from con and this attempted world takeover).

This wrapped up with the new age of false-flag(ing) starting Summer 2016. All for the mainstream media to be the conduits and traitorous dupes. Literally the hucksters, fleecing towards their own demise. Like the insider-traders on 'put options' as whatever it was that hit the twin-towers killing them in their clever(what-not).

God wants – intends – to rescue us.

My preach: lies are the oxygen for the spirits behind the 'other side'. Our faith in them is what they're driven to exact. All clued in the earliest poetic descriptions:

No God didn't. Not what the devil/s there proclaimed. Other day, I confusingly buried a reference concerning same-entity, claiming to offer our saving and anointed one, world -for- worship. More lies.

Lies going beyond expediency for plans are the reverse of/and attack toward – the Good – rescue coming – News.

More… much more than the 'tell ever-bigger-a-lie etc…' because, infamous line.

It's a battle and faith. There's the promises of God; Who will believe, I mean really believe, and see the now-fulfilment in our-midsts -and- who'll verbally, publicly confess-along with the lies?

Silence or pretending too-difficult to conclude is a denial of evidence-shining truths. Albeit with some reasonable reservation but say… 'betting airline-based put-options' and blaming c/o Govt. claims.

Contemporary 'religio-call' (i.e. you can believe in Jesus/what have you, as long as 'Caesar is Lord'. An exact parallel for the basis of the first main persecution against the Church).

Muslim-motivated 'terrorists' action in the 'west'?

Assert this or that, is a confession of faith.