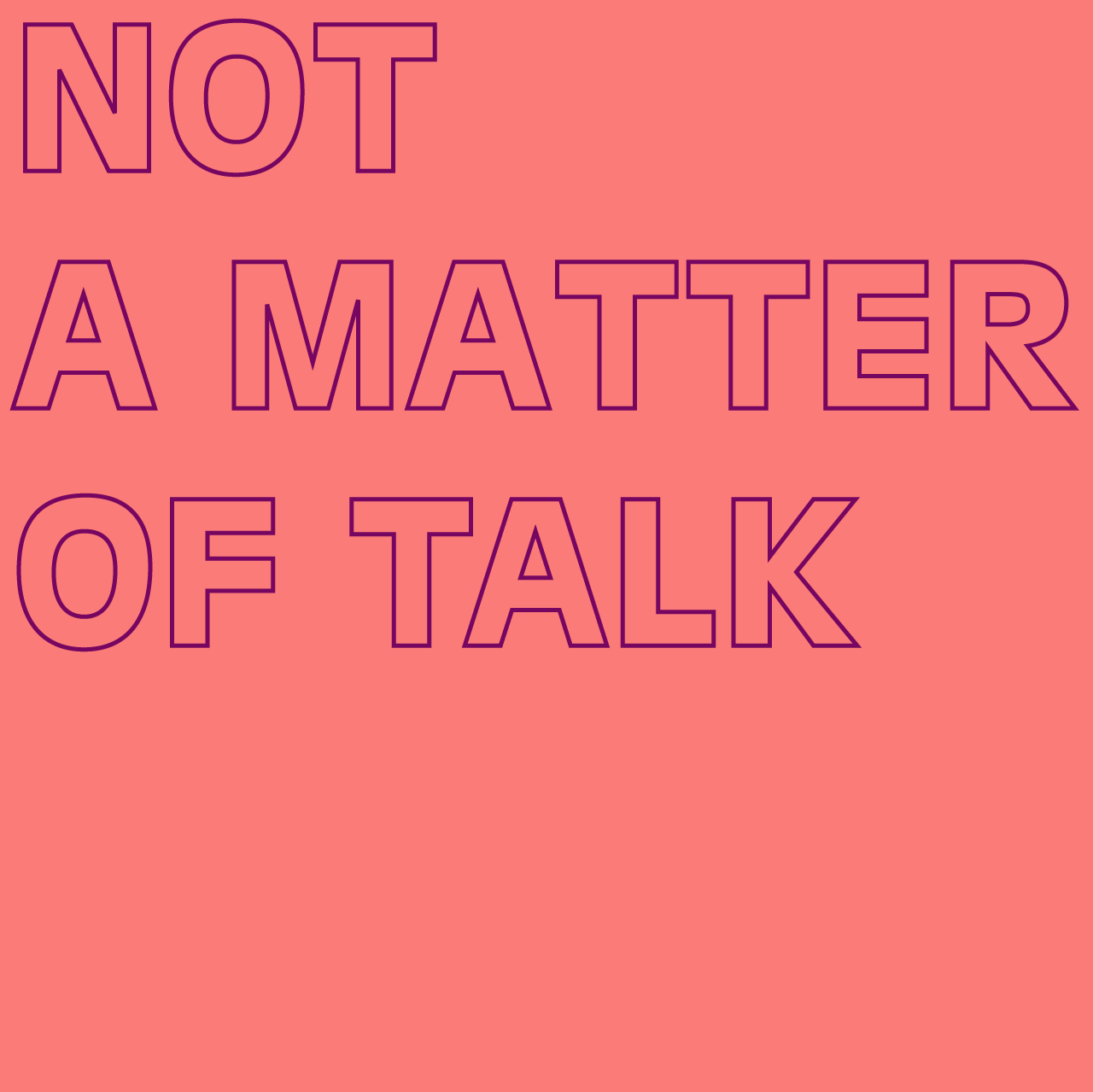 No point if at all or oh so rarely, in trying to change anyone's mind. Tests undertook show: Stubbornness and pride are resilient. Hence, cooperation toward the coming of God's reign on earth said; not about talk.

An astonishing seems-counter claim. Considering the calling and cause to proclaim. To use words well, the power of them and their purpose, with even life and death held in the balance. Lots of words and talk matter. So why not about?

Because alone they won't do it. Bible words and expressing about can correspond to death, as seen in the law. Language telling us what we can, should and must do: Useless. Or revealing the hidden, yet not able to see.

Gets us nowhere -- but failure, disappointment and can be guilt, without the redeeming live power of the person of God.

God's presence now and involved is the only way ahead. The Bible -and- the Holy Spirit is the Good News. The former without the later isn't. Not a given, there's the vital combo. Takes us, and attitude, and seeking desire and openness. Takes God arriving upon and/or released within.

Parallel and another found-missing. The pre-Gospel, or can say is... The Gospel and Truther-Talk.

Empire etc is the New Testament background and implicit in all that's said and done. Times today are no different.

To be what's called 'asleep' in pretending "being so-called awake, an exaggeration" -- not good. Say the dot-connecting and screaming concern is an illusion, a perverse geeky obsession? Be sinning. At least in mission terms, makes us compromised and rebellious souls.

Rebellion as in witchcraft, no less.

As in the Bible requiring the Spirit and obedience better than sacrifice.

Take no notice at all 'what's happening' or pay proper attention? One or other. Not receive news-based lies we're fed and surrounding corruption without discernment and resistance. Do the cop-out, invites unseen-other and evil influence.

We're all a bit demonized. But go "...that's conspiracy theories", shrug and yawn... gives the enemy permission to move on to more like possession.

Until someone actually believes 2+2=5. "No, it does..." they exclaim. And you know what, this is, what they see. Eyes blinded, up one side and down the other. Lights on, no one home etc.

Dead in the sin of seeing the world we live, as demons-behind their spokespeople say. Want us to see and believe.

Sure, there are zealous evangelicals. They'd counter-on about one to one's coming to Christ and other positives. Or their progressive counterparts doing their social-loving influence and peacemaking.

Yet... the refusal to talk-Truth and name the Nero/s of our time is bowing to the Emperor. New Testament days it was illegal not to bow.

Today the legality and what happens is hitting China and parts in obvious ways but coming here and soon.

Unless... or because, 99% of the public don't care to care. And Christians -- what tiny percent they are -- go swooning along with 'the world'.

God is watching and suffering seeing a prison constructed and this is not the plan. Obvious... as the Bible narrative states and Church history attests.

So peep won't have anything too close to reality. The way it goes. Unless/until...

Count our-self well lucky and Open. Rare as. Way it is. For now.

Important to get over this. Not moan but be thankful and seek Christ.

Final nagging and bash out: Has the internet shifted our relationship to talk? Digital plenty cheapening the currency? Got to wonder eh.

Benefits with dangers. A downside is all about depleting levels of timely or prompt responses. More able to immediately communicate, leading to the click and ease of ignoring.

Upside? Able to try-understand powers warring and words from the latest Saker update. A quote on a comment:

'Trust comes walking, and leaves on a galloping horse' (Voltaire)

What comes... is the shaping of our image of God from the impressions we soak up from each other. God revealed as a person/s. This, we're said to reflect.

The battling to get us into lower and less loving levels is a push to obscure and misrepresent God. We aren't evil entities final target, it's God.

In character, exactly seen in Christ.

Enough to glimpse at our best though.

(Note: 'He' will do and what we're given to use. Without needing to say 'her' but of course.... knowing, male and female, God the image, therein).

Trouble is, can become a mess. We see God instinctively through our view of humanity. Somewhat, or a whole lot.

Let downs and bruising of those doing their failing and lashing out. Off we walk into trust, thrown and running out in let-downs and the rest. Or, remaining and the abuse. "Slap me again... please, do it some more" and on and on.

Look at the screwy views of God? They come from sub-best or even the opposite of claimed-presentation theology or... subconscious lies.

Could be upfront and yet, most likely challenges:

How grace-filled and loving the present one is.

Dashing this out to build me up.

Not for a downer and doom. We have the power and this a person and God. Friend and father, persistent wanting to engage with one.