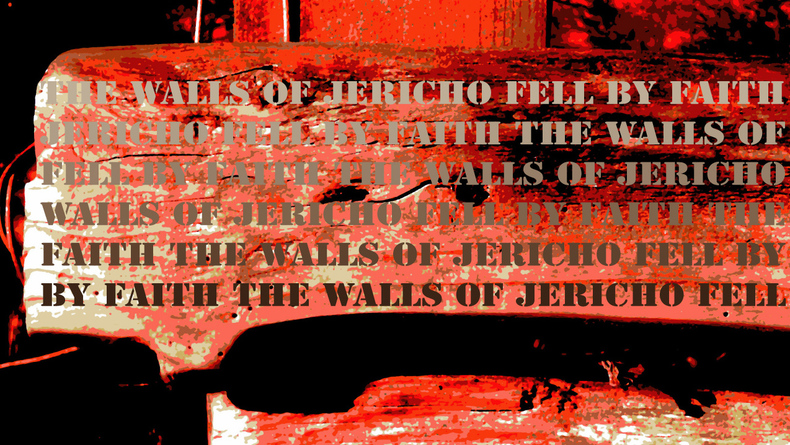 There's only one Jericho but two expressions, beyond any local or personal application. But a fortress surrounds us all. In the original, all and everyone inside mustn't be let out. We live 'in' one, that must be demolished and, as many inside saved from premature physical death, walls constructed towards fascilitating.

The 'other' wall protects the most-influentially destructive. These who built, and are building our… prison-planet. The wall-makers themselves, walled-up.

Demolishing, involves some practicals. We face perpetrators, so hard-hearted, with no intention or much if at all capacity-not, to kill most of us. These people cannot be allowed to remain as they are. Some deal, whereby they get an island to die off-on, a self-made prison -or- locked-up regular -or- if judiciaries don't go further... (although God's for locking-up, for more than one reason) -or- they kill themselves/are killed.

Whatever the solution, one has to be found.

For centuries walls stood protecting deceptive secrets and 'societies'. These geopolitical war-lords. Central bankers, backers. On one level, Canaanite clever, another; so, circuming-to, the dark-side, they let out and live religiously-in a mind-set of destruction, that cause them to be such global destroyers. Whatever we see at worst in behaviour among peoples but inculcated, through cult-alligence. Drunk on illusions of, and about, power and success. Believers they, the light-bringers. A cabal, polite and pretty on the outside, 'Nero' on the inside – sickos.

Back to the could-be, oh-God-cruel and hateful, interpretation and instructions for genocide, via Joshua. Obviously, I don't accept, God did wrong. Jericho's unseen strongholds must've required these actions. Love is always God. Always – 'why?' In those times, included everything physical, must be love outworking, however contrary this seems.

Apart from God's 'anger' at what those in physical-Jericho were like and need influence was cut-off in literal terms, or how this would serve as any kind of example; There's what it did, to and for, other realms. Consistent with the rest of the Biblical picture of God, the opportunity and call for people to escape the consequences upon themselves individually. Possibly..? Relatively.

What God couldn't do, was let the those around them, become-like them. C/o the unseen.

What terror, some may have inflicted on the rest of their group, we only get hints of in the rest of scripture and general history. So we can't be sure – wasn't such barely imaginable horror – God's response even to us, could seem merciful. God 'kills' are exceptions, and primarily in wars in physical defence. God's not about destroying 'peoples' but proportional just-like mercy. And, here as in all suffering, God was with those, in compassion… as far as.

But this happened, had to happen, for reasons invisible. And to the totality. This isn't cop-out apologetics any-more than not addressing archaeological based criticisms. I believe it happened, and assuming this – why?

'Necessity' for reasons not revealed directly and stated but in the overall Biblical, makes sense because: We live 'in' a war. Not-ever otherwise, yet some peace 'on earth' gained. And these experiences, never a reflection behind the 'scenes'. Here we read, is all fight.

Now the Spirit Of God is present and Christ's Death. Everything's different from those Jericho-days and this, we're told, is everything we need to bring down the walls – we face.

NWO-skeptics can't, (or don't want to), understand why the few, we say, would do… as 'we' say? The answers are; religion, existential angst, cohesion 'without parole', intoxication/medication/mind-control, cognitive dissonance and through all this – their desperate running for self-preservation. Particularly the five or so thousand 'rich and powerful (nb) …looking', superiors' lackeys. This lot. They're well-aware that life for them carries on, or if one or all so fail, the walls fall and will all end up vilified to by the masses and most hated. Known-publicly criminals. Amen.

Hence the motive to push this all on… as long as alive or through to the 'order'. The fulfillment. Some hold-back, but on and on.

Their need is to make more and more complicit.A world acquiescing. This becomes their cover, their only 'hope'.

Yesterday, I left the write knowing I struggled to pitch right. I won't look back on it, but abiding-over came the impression, it read too all-mechanical about God's operations. And somehow imbued with capacity-like a laser-beam, all raw-power, over the living-personality – God I say – is. This is 'who', not what, I combine 'in faith' and with the Word. I grasp on and towards describing, knowing I'll only get it right-er by risk. This 'daily' (prefer that too the B-log-word), is (a) revelation in process.

On this, was encouraged in re-reading an unusual re-repost, containing a comment I'd written, that happened to amplify my sense on all this. I'd written something I realised soon after, disclosed doubts. I have no reason – not so much, not to have – but declare? Particularly publicly. I'm sure of what I hope for but am I so, certain of what I don't see.

Faith is what's manifest. It could and should come deep inside to have most 'life' about it but where opportunity actions speak… in this case writing moves, must watch 'what' I put forth.

I accept that the many, won't read anyway, being wildly unpopular. Much about not being so-good at 'it' but certainly, the position I'm in: Too awake-claiming and/or open theistic for Christians. Or traditional over prayer and revival. And, for the 90+% not? I'm an all-yapping Christian. Nuff Z.

Declaring the faith to deep as it goes, knows. This the journey. That's my other half, why right. Sowing seeds in me.

Late start this morning, alarm-off inadvertently. Must keep this switched on. 'Alarm on' isn't this so, what we need.

God, please open our eyes, to first see you and through this the purpose of our call to overcome – what and who. Ourselves maybe but we reach out in your compassion. Your love. In Jesus.