A desperate but not unusual start is recounting once awake in those first moments; The 'Disciples' (better title than ‘Lord’s’) Prayer. Holding on, in a poor man’s frenzy, maybe eventually moving to other promises. Again and again the again, saying inside the same words. Locked in, all reliance. This always last only action to remain. Rocks against stormy trouble-thoughts. First day on this here, ‘give us our daily bread’ is a song. For writing to boomerang back, spark me up - catch a fire.

Devote to prayer is equivalent to devotion to God.

Otherwise and if brewed-up most manifest, one shocker of self. This the diagnosis: ‘In me there is no good thing’ (said Paul). For all that looks so good, seems evident in life around, not-devoted to prayer isn't so. All depends what we’re seeing? The fact there’s a war on, might in history and parts be less pressing, makes good now, to look out and respond. (War behind the wars has always been on but not so out in the open). There's nothing more critical than facing what not many want to call. To interrupt normal transmission, and this is the only good worth reckoning and as capacity allows, action that extends beyond our family and personal cares.

Vain babbling repetition, by those in Jesus day prominent for praying, is a not-to-follow contrast. He goes on to say we're to hide away but this doesn't discount doing on-the-way. I get caught once in a while walking and too out-loud not to be heard. Almost always gets a smile as I apologise and say why. Precious and loved heathen maybe, instinctively empathise. This rising in our semi-consciousness of this besiege upon society and thus us. A lurking persecution, we-know-who and why,(that is, those identified as ‘awake’).

Repeat verses, best aloud, breaking at the unseen world order, who want us worshiping them and ways. The other is languages unknown, quaintly translated as ‘speaking in tongues’. Again more build-up, more ammo. Against the pummeling us much media driven constructions, soaked in and spread plague-like. Here to mock God through us, as these authors fight until no more but a trans-humanist, they believe, their long-future is achieved.

Efforts, ostensibly websites distinct out of the sheepy-mass, stand-up in levels of generally responsible light. Beacons for an an information uprising, overwhelmingly dismissed or ignored. They have differences and some dividing (if let) questions but the central thesis is common.

Devotion to prayer. This understood in sharper and light-er prophetic - Biblical - thinking and its corresponding action, releases what's like a reigned-in army without food and weapons.

And the word says give thanks. And as for Psalm 91? Not to be underestimated. 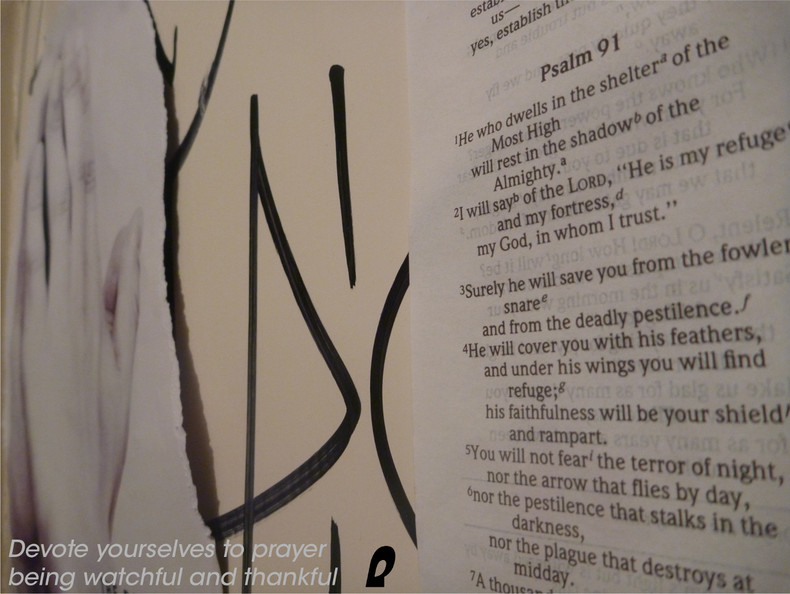