doll by doll - figure it out on your own 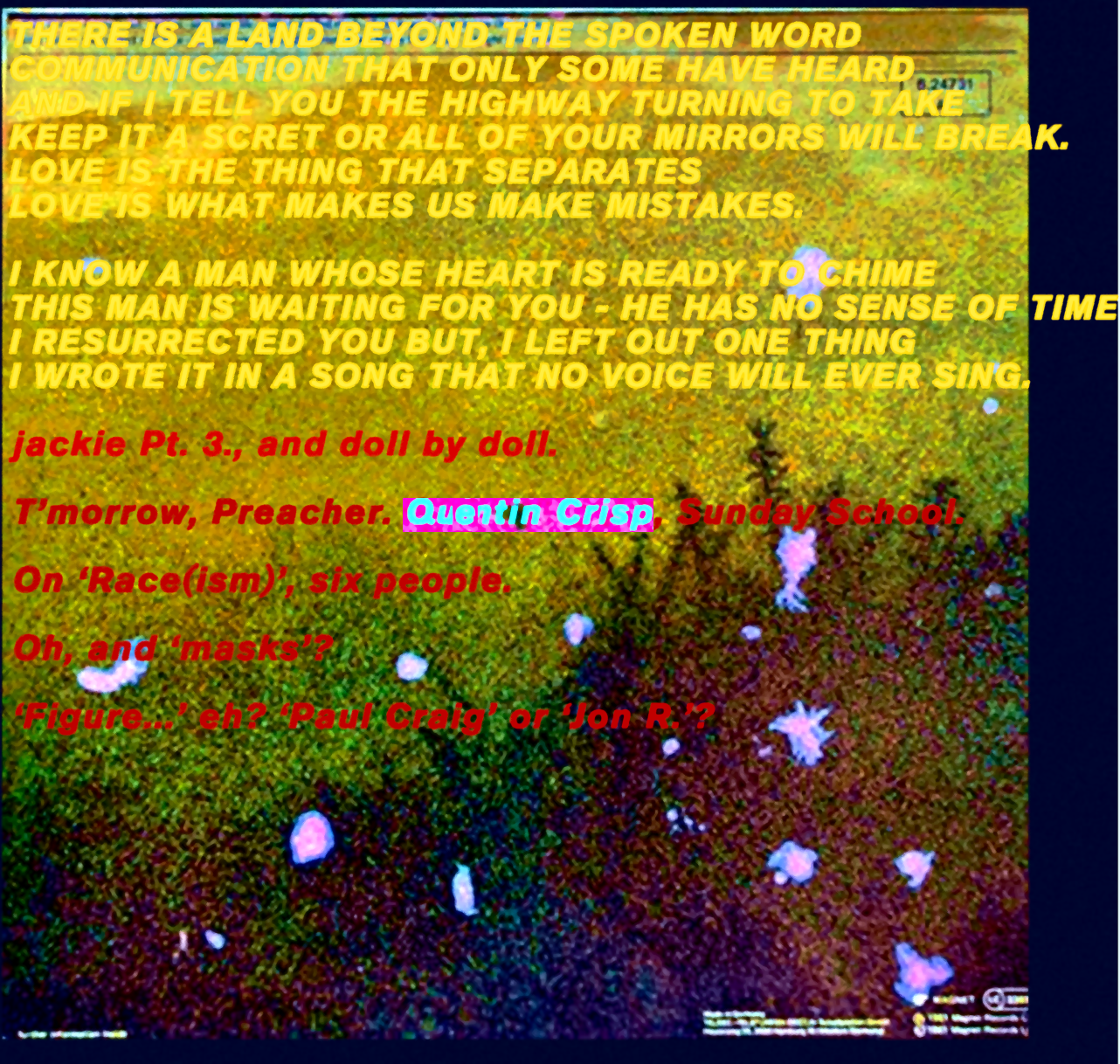 Play Loud. (I'm) off out. Type and graphic later, must do a 'Which': 'Masks or not?" Paul Craig Roberts or, Jon Rappoport?

Review the pro's and con's.

What happened to Jackie, minutes before the photo on the cover of Gypsy Blood?

'Today's Quiz', 'Guess-you-what', usual sweets and, a classy copy of a Bible, is the prize. An 'NIV', or prefer another translation?

When you're ready? First rewinds on Figure it Out and rewinds some more.

To 'The Perfect Romance'.

Word with this song is "heavy" and somehow, celebration. The edge. Hope. Can be, uplifting.

I Never Saw The Movie

The Street I Love

I'm no time-served DBD fan and discovered them only with the recent CD reissues, so this album doesn't represent any missing slice of my childhood or anthem for my lost virginity or anything like that. I'm posting this as an "outsider's" note, which other outsiders might find useful, while the long-confirmed DBD loyalists can cheerfully ignore me.
This, then, is DBD's third album and last, in their original line-up, since it bombed and singer-songwriter Leven ended up sacking the band. But that was all in the future. At this time, DBD tried to shed something of the "mad, bad and dangerous to know" image and produce a mainstream pop hit. Now, even without Jackie Leven's gargantuan appetite for drugs and spirits at this time, I'm guessing DBD would have no more been able to compose disposable pop confections than Cliff Richard could front a death metal band. But, be that as it may, their endeavour was to produce something akin to Blondie's Parallel Lines - right down to Jackie Leven's fascination with European electropop echoing Blondie's reinvention of disco.
This, then, was their mission statement, but in this they were thwarted by two inconvenient factors: (1) at the helm, no Mike Chapman, whose Svengali-like management of Debbie Harry turned a NY punk into a pop princess, and (2) Jackie Leven himself, whose protean talents as a composer and performer simply will not do as they're told.
The net result is a curious hybrid indeed. Electropop anthems like 'Caritas' rub shoulders with folk rock airs like 'Main Travelled Roads'; bruised rockers like 'Perfect Romance' hearken back to the choppy, driving style of Gypsy Blood. Don't get me wrong - it's all good... it's just all different types of "good". There are enough ideas here to keep most bands happily employed for three albums, but Leven & Co concertina it all into one. The resulting impression is crowded and a little confused.
Another side effect of this bid for commercial cachet will bring a smile to fans familiar with their other material. On their earlier albums, the band made a virtue of delivering some achingly poignant and romantic songs with the maximum of menace and brawling intensity. Now, trying to sound more like the sort of people that might get a slot on TOTP, they actually come across even more frostily distant, bitter and vehement - the track 'Perfect Romance' contemplates wrist slitting suicide from a sordid toilet cubicle. Which sounds great in hindsight, but was never really going to win over Blondie fans in large numbers. And, indeed, it didn't.
This album, then, lacks the fiery charisma of their earlier releases and dates a little worse (as does Blondie's Parallel Lines, since nothing screams "It's 1978!!!!" like Heart Of Glass). However, the songwriting quality on this album is the equal of and probably superior to anything else in their back catalogue. Newcomers would be advised to head directly to Gypsy Blood to find out what DBD are all about. Once that gem of an album is safely tucked into your CD collection, this one will reward listening. You'll understand why they went under... but you'll find yourself listening to it a lot!
Oh, and such is the tragi-comedy of things, that had DBD endured and followed the muse of Main Travelled Roads, they would in a few short years have taken their seats at the table of "Celtic Rock" alongside U2, Simple Minds and (shudder!) Big Country.

This album was my introduction to Doll By Doll, courtesy of a friend who bought it on release and lent it to me shortly after. I've snapped up all four of the CD releases, but this one remains my favourite. It's interesting to note that other reviewers consider this to be their stab at the commercial mainstream; as soon as I heard 'Gypsy Blood,' especially 'Binary Fiction,' I felt that that was more of an attempt at stardom. It so happens I like that album too, but this one is their richest. The production helps to give it an other-worldly feel. Like most truly great albums, it inhabits its own world, apart from everything else.
It's easy, with hindsight, to see why it flopped. The twelve songs are superb, but not one of them represents the whole, so there's no obvious hit. 'Caritas,' which took the disco sound on to another plane, so that it feels more like a fierce rocker, might have done something, but would have left the rest of their music alienated. The album consists largely of poetic rock with a folky undercurrent, by turns dark and menacing, then warm. 'Be My Friend' is a glorious, sexual celebration, while on 'Perfect Romance' you can hear the razor. Despite the diversity, I disagree with the notion that it makes for a disjointed album. The unique production makes for a seamless experience. Everyone I know who's heard it loves it.

'Once a classic, always a classic'.

'Their doomed attempt to woo the mainstream.'

He sure gets it, full-on.

What must be, two, definitive articles on Doll by Doll.

This is NYC., and my time, in one video. Konk, 'friends', particularly a couple of them.The streets and Tompkins Sq. Park, the atmosphere, Salsa, vintage and New York.

Three otherwise and not Brit-led?

The first is a one to consider what became, or is remembered?

The second was the womb of all future clubbing and dance (music), and third, its first steps.

Homegrown., downtown with, 'Bad Brains', 'Band of Outsiders', (my close friends)..., we all lived downtown, or thereabouts. From the exodus to the suburbs. In came Puerto Rican, Jewish, Ukrainians, and an even-spread, across the whole world. Settlers in an old New York, the last 'poor bit' and Manhattan. This side of Harlem and couple or so of remaining blocks, and 'Hell's Kitchen' on the West-side.

Took in hippies, bikers, then came handful or two and punks, 'alternative', types. The 'colorful' few, loners and couples, from every city and towns across the States. Enough, could get work. A flat.

British contingent know each other , or near enough? Not so many. Two or three, among about six, squeezed into a low-ceiling basement, and a back garden. "113" (St. Marks Pl.), 'UK Central'.

The Lower East Side, cultured-up lot. The last of the 'bohemians': Whereby everyone around, is on the same 'hustle-to-survive'.

[Reckon this would make a fab future post. Cursed Films.]

Entitled, 'An Evening With...'

Wayne Sleep who was there, shouted.

"Yeah, Go on an' fucking, sing-something".

Here and Jackie, ne'er better, by anyone, or any... where. In these surroundings?

Is this? The Undisputed, Undiscovered, Ever?.