2020_06_Exceptional_Verses_a_ten_bag. Exceptional and, an occasional playlist. Nb., carries a "WTF" warning, not-playlist-often; heavy on the Jesus tip, first three up. And the closer nos 10. Else, inc., most, are [playlist] rewinds. 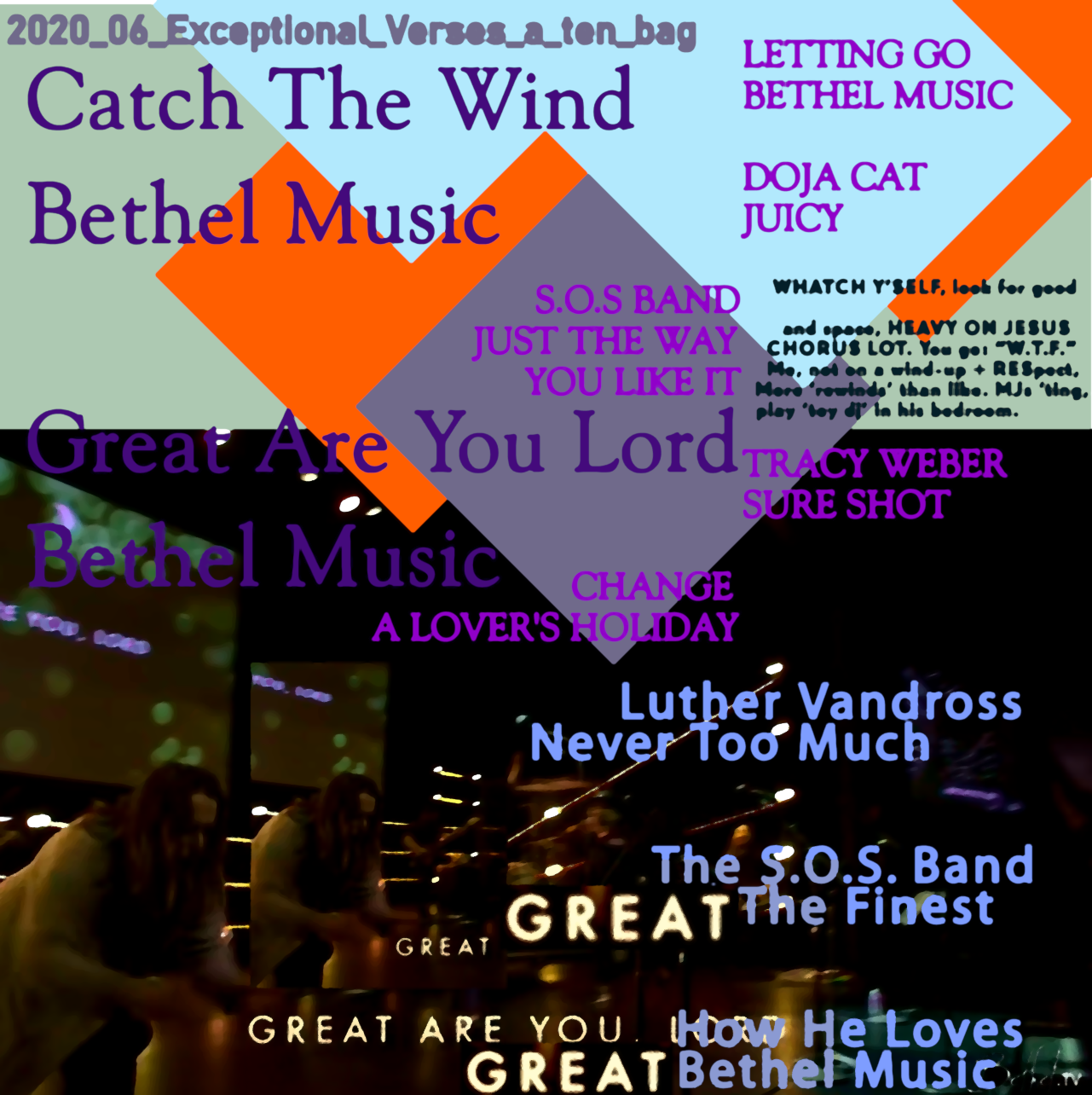 17.31 breaking fast (music). Fast like, not even allow myself to see a moment of TV news, or read a headline. Blurred men on pedestals with ticker-tape below.

R.B.H.IN My Arms can hear, headphone off. if I can recall one thing.

Like Tito and orchestra, and 3 or 4 re-rewinds, noisy in my 'ed. Got clear and abandoned Write-First to break and sound.

Graph up for p'list. Be pm. Another NOS (Nine O'Clock Service).

TYPE ON CO IN CIDENCE:

A Big Off tune, might write something good today, needing a number.

To speak of unsettling real un-explainable, or is it, "umm...explainable? "

"A nature ramble through..."

Bruce from Doll By Doll, manager, first phone call. "How do I describe you?"

Still reeling from the 'spectacle'.

Booking them at the all-know is £15. Petrol from Maida Vale and back and chips. Soonest and bumped a booking back.

["Holy Bunnies". Kris (Needs) newish website, had been down, assumed so, still. Here if like, for jack the dash, splash, and sunshine Jesus. Go to Kris, for writing on music, and 'proper, like.]

Kris, stands as reads, not because, I knew him. Pioneer and music Jorno supremo. Read it, might not have read about music like this, if, younger? Top independent, in the peak mid 70s -mid-80s. Where we learnt all that was of interest. At school, post school, continual assessment; Zig-Zag (first of mags), N.M.E., etc.

Well, only caught the site once. Read it gulps and re-educ. and educated, inspired and ideas where to listen. Want read and "bim-bim-bim," about great and/or interesting: Kris makes it.

"What shall I put on the flier?"

'Two drunken play boys...", Doll by Doll on 'Strip Show," would be a contender for the 'On Dating' song.

Four broozer-ish and boozed, leathers and silver. Lingering, swaying, a few feet, from a two-foot stage. Had an audience for their shinnyin' around. They were jabbin' about with a word hear and there to a few at the bar on the other side of the room.

And nature ramble, and hell, was to cometh upon them. Didn't wait long.

Playing, and boys, in a man-size skin and leather jackets. Fueled on pints. Yet more, bred and highly trained in. Pursued and wallowing in what now, "can't believe" the stupidity and my on and off for decades.

Heating, turned on or never was, the feel was dank and tired.Cooling down. A kind of crowd, had gone. Last band, late arriving (?), it was about 11pm.

On slinks the last and late band. If drinking before in the pub, looked more ordinary boozers. Fifteen people, in a big ol' village-like hall.

Fifteen people in a big ol' village-like hall. That be good, I thought, suit the front row.

Stood at the front and looked intent an hurried, Next it's my "We're Doll by Doll" encounter. :

Flipping about ones, almost face to face, are ready for a tight set and some 'Johnny be good' rolls and jamming.

Singer says hello and name of band. "song called Butcher Boy". Silence, no movement, observing us for a second time with patient, when an eruption builds, until industrial banging. "All My Friends Arghheee..."

Jet landed, was taking. Amanda I look at each other and smile. Not long, shouting in her ear, "Oh God, they're ...really, good..." A ramble, "no" a blitzkrieg and a bop, with a disturbing underbelly. Where We, Going?

[23:13, be Part 2., and Butcher Boy is throwing out boxes and a band who give (me) permission to be punkin' serious and... stupid, stoned and drunk.

Push back, 'On Racism'. Clocking out, thanks for... taking some seeds from me. Us ?

Didn't add what I played in my 'eating window'. Not sure what and that one. Better do midday, get a foot in. Music from midday, with a few from the latest 'list]

The West and world, at the crossroads. The big 'OG' Augustine of hippo, aka hip-hop, circa. 300 AD. One overreaction to being in a GOD/"OTHER LOT" and '50/50 split-power' cult. When becoming a Christian, assumed Plato, his gran-dad in the thinkers scene, had the counter rap. Struck a mysterious balance, 'can't understand, but...'

Could-be-weird, been a happening around me..., good...weird. Type out, [and Big Up Brian, the "facilitator" who got me into]: Observations, feelings, needs, and requests. EXPOSURE through disclosure?

Call that a five-star review Granddaddy eh. "What a song?"

Kevin Garciab the guitarist died, and have not looked into what happened, was an upset. He looked and sounded every inch., a star rocker with a charging presence. Wanted to start a fan club after seeing them in Brixton about 2002. Girlfriend Carolyn and I had a big-gig-moment, left giddy and babbling to fellow "fans" up front at end. "MUST." Across the road in 'Southsouth, Friends of Refugees, and Arstree' HQ, stood at the bay widow with barcadi and coke, bought the URL for online appreciation. Fans streamed out later, after Snow Patrol, who followed. Don't think we stayed, couldn't, after that. Or...?, they on first, we don't go in? How about?

Back to type and break the intermittent fast, yeah, start today. [2 pm./ To be cont.]

All to say/write: look and sounds realms, could cause shifts to our ground of think-in.

Tell you the record playing inside my virgin morning head, is...? Link, not listen m'self...well, playin' away inside.

DATING/ME/LIST -to do- from the last few days/weeks, and 'sayin' gonna'. Outstanding, and promises.

Charles. Set for first poem. Rappers? "Please sit down" for one short poem. If I waz a rapper, think I'd give up after seeing/hearing/reading, Charles?

Read and hear. Hip-Hop, a 'guest, in the house of Poetry'.

with one punch, at the age of 16 and 1/2,
I knocked out my father,
a cruel shiny bastard with bad breath,
and I didn't go home for some time, only now and then
to try to get a dollar from
dear momma.
:
it was 1937 in Los Angeles and it was a hell of a
Vienna.
:
I ran with these older guys
but for them it was the same:
mostly breathing gasps of hard air
and robbing gas stations that didn't have any
money, and a few lucky among us
worked part-time as Western Union messenger
boys.
:
we slept in rented rooms that weren't rented
and we drank ale and wine
with the shades down
being quiet quiet
and then awakening the whole building
with a fistfight
breaking mirrors and chairs and lamps
and then running down the stairway
just before the police arrived
some of us soldiers of the future
running through the empty starving streets and alleys of
Los Angeles
and all of us
getting together later
in Pete's room
a small cube of space under a stairway, there we were,
packed in there
without women
without cigarettes
without anything to drink,
while the rich pawed away at their many
choices and the young girls let
them,
the same girls who spit at our shadows as we
walked past.
:
it was a hell of a
Vienna.
:
3 of us under that stairway
were killed in World War II.
:
another one is now manager of a mattress
company.
:
me? I'm 30 years older,
the town is 4 or 5 times as big
but just as rotten
and the girls still spit on my
shadow, another war is building for another
reason, and I can hardly get a job now
for the same reason I couldn't then:
I don't know anything, I can't do
anything.
:
sex? well, just the old ones knock on my door after
midnight. I can't sleep and they see the lights and are
curious.
:
the old ones. their husbands no longer want them,
their children are gone, and if they show me enough good
leg (the legs go last)
I go to bed with
them.
:
so the old women bring me love and I smoke their cigarettes
as they
talk talk talk
and then we go to bed again and
I bring them love
and they feel good and
talk
until the sun comes
up, then we
sleep.
:
it's a hell of a Paris.
:
The Rat. Charles Bukowski.

Seeking to confirm the clear inclusion on a #####What's Not Up?

I've been a mountaineer, a musician, a driving instructor, an English teacher, a car mechanic, a farmer and a tour guide (not necessarily in that order). It stands to reason that becoming a writer is the next logical step. Now all I have to do is hold my breath... Favourite books Mervyn Peake - The Illustrated Gormenghast Trilogy Elias Canetti - Auto da Fe JRR Tolkien - The Lord Of The Rings, The Hobbit, The Silmarillion JKR Rowlings - The Harry Potter Series Philip Pullman - His Dark Materials Terry Pratchett - Truckers, Diggers, Wings Ken Follett - The Pillars of the Earth, World Without End Douglas Addams - The Hitch-hiker's Guide To The Galaxy B Traven - The Death Ship John Steinbeck - To a God Unknown.

Yeah, him or Tony, but sure had a way. Would say, can't change Robin did the Remember album and made Palace of Love his, deep in what happens..., at the end of the song. Not a show, like... we had (an) 'experience', like.