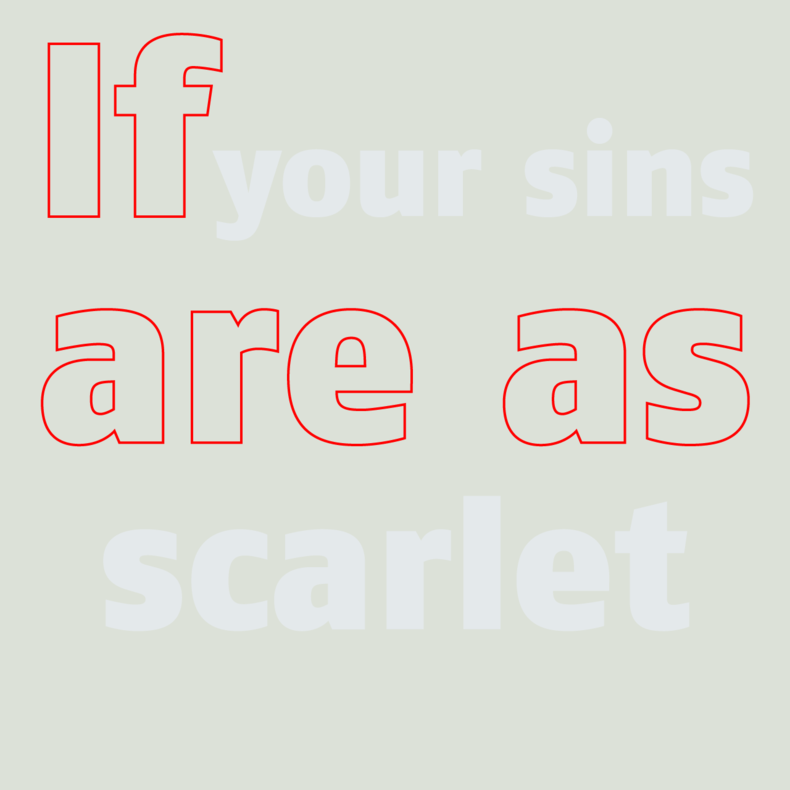 Only about an hour tweets and all. Straight to a word… I do not have.

On to 'Micah' but prepared for day a go, early Isaiah. Though your sins...

God is judging us, in and through Christ. The been done and doing. Therefore, we have mercy (‘not what we should justice-get’) and grace, not laws - but for the law of love.

OK, still gibbildy-gobboldy structure and language but the message how God sees us, contains nearest to an inspired impression from earlier, struggling prayer-like, activities.

Pray all day as go. This best.

The visual for the verse should only include 'if/are/as' and the rest all white blank but… this a bit too oblique.

Maintained for a while Brexit/out (unexpected by me) and Trump around and potentially 'in' (if there is, an election and not delay in civil emergencies/ or..?) processes for God's judgement on UK/US.

Neither have anything like the outcomes of meaning and hope some believe, and certainly aren't the counter-productive dividers, critics maintain.

I can't 'work out' if I think the UK referendum was a failed to fraud Remain -or- conceivably used to bring about the exit.

I'm not convinced “the people spoke” was accurate etc.

As to when/if/what it means..? It doesn't. Not that much, particularly compared to the likelihood of any genuine 'independence' from the elite/empire.

The concern the enemy wanted us out, might remain theoretical and not in reality cause any bureaucratic or authoritative 'seperation'. This might be some evidence of the possibility of a fraud 'out'. A 'replacement' knowing the overall EU demise suited this particular scam.

Regardless. All the fussing and fussing some more, post-referrendum attention, is a distraction. A cursory glance at the true happenings of the economies w.wide should put us on our knees.

Leave it here. Pray that Orlando gets busted open and for those filing lawsuits seeking disclosure of information.

The enemies frontline-sheep want to begin to admit their crimes as necessities or brazan 'live with it' we know best/you don't understand.

Yet, paradoxically they know this skirts with danger, knowing this could provoke their own counter-reaction, forces to escalate 'civil emergencies' to cover. Something they 'want' only not quite yet.

Like the EU, they don't so mind which way it goes but have their dynamics of 'faith' they belive; must be adhered to, operated in and direct along with.

Pray the Euro/Ref judgement will unsettle both 'sides' of this debate among UK and Euro pops.

In judgement there is….

And behind the EU? May this be exposed. History, roots and motives.