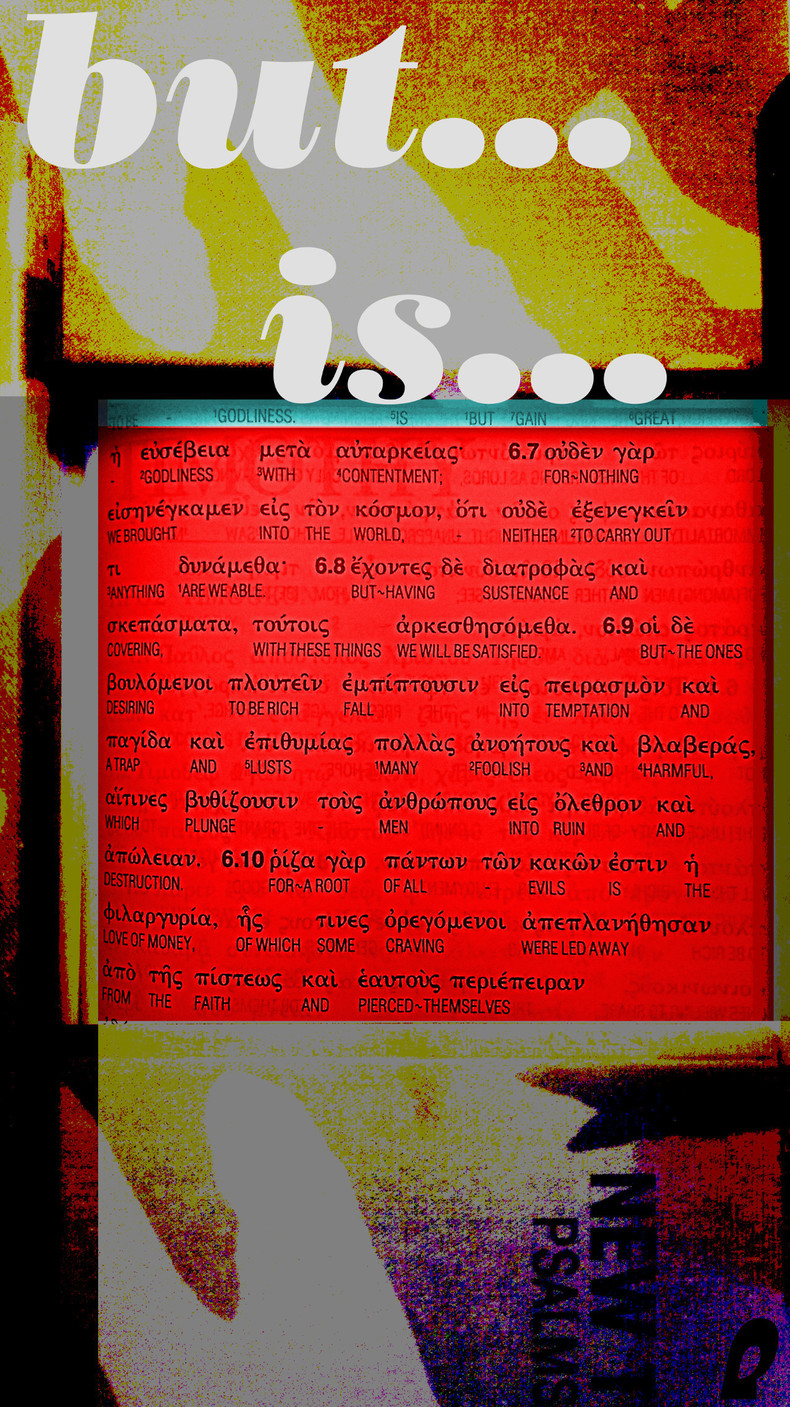 Today's readings are about sexual relationships but I've need and lead to talk/write-on money.

On sex for a mo: God's detailed, speaking to their context, presumably making divine sense to them. Laws to bring a people out the ways of these lands and tribes, separated to, and for, God. But why? Unknown, for the most part, better living is to be had. But this is somewhat subjective. Or... is it, only about 'pleasing' God in abstract ways? Mystery accepted on this, what's clearer is 'purpose'. God has needs… desires… to bring something about. Something out from this world, because there's a problem for the future.

I can't expand, partly because I 'don't know-what' but to try, unravels too much this and that. Same with money. I can tell discovery is necessary and most importantly: Need a word.

In this exercise this morning, make some stand-alone statements, declarations, do well to crack out:

Money and sex to often, mass madness – only other widespread gripper is power 'over' people.

Sex and/or romance when an unhealthy and/or all else draining compulsion, is an intoxicant on tap.

Idol-making with economical motives – but it's more a pre-idol, for something else. From some of what we consume physically to most media, designed to warp our sexual self-awareness, back to how it was in some ancient times and places. And other times. The Weimar Republic was a particularly influential junction.

The enemy uses ritual-based sex for its pre-worship rite of passage. The direction, is for humans to come to all-embracing worship of 'them'. Sex and death (sacrifice) is the precursor, to these powers with personality, taking over their 'hosts', claiming their anti-Gospel message is true, while striving for supremacy.

Material ownership and the power of exchanging, to gain enough or more, is in constant re-construction by a technocracy. The building blocks of the modern financial world are to steal, kill and destroy – all but the enemies cabals of representatives emerging 'rich'. In their end-vision, will be their one cabal.

The enemies ways, mirror opposite to the Gospel, intend to reshape humanity. God is busy in the midst of life, in the very engineering as far as room dedicates, to see freedom for as many as chose to live otherwise.

God works most 'closely' with those who have most faith. And deeds that flow, in truth-knowing and just-living direction.

Wrapping up… what I get, is: God wants a people who can 'live by faith'. This has and still is, to care for the poor and build the church. But this more-all, when the world in those time and places wasn't so a 'time for war' – but 'peace'. Now there's another mission. The empire is bearing over the nations and wanting us to all become China, an equivalent to a North Korean. No, fight for the poor and build local church in say, Nth K. Not in the way, even described, in The Apostles' Acts. (Although a lot closer to the blatant stomp of empire, than Western living today). In some places all we should and must, is destroy that 'empire' -or- live in a cell. No one puzzles this theology under these conditions, aside from fate-fool thinking.

World-over is increasingly living in Book of Revelation-like times and not in the popular futurist sense. But O.T. Prophets-like and Jesus-prophetics that explain, what we're to do. Not – (reading me/you'd know) – gawping in some back to the future pacifier, a potential cop-out-er.

No, we must put down sex and money. Stamp on all that isn't Godly and good about it. Shout it down in Christ, for the Kingdom.

Tomorrow's reading is about 'health and dietary laws' and coz, just because... more on money and get into, all kinds of evil. I have no interest in going on about the technocracy. Be done, repetitious. What I'm trying to find, in these writes, is something of God, that has a call to go out.

On the come-to-Jesus front. God wants to show us how we can be looked-after directly from… in ways, that'll astound. That's all there is to that. God is a giver, through ways we don't have to see how in advance, but watch. And go phew… “what's about that?”. Thanks flow and praise cometh.

God you have shown yourself through money-ways. You long to love us and when necessary, materially. For those trying to get and stay on the front-line, uphold and help us have faith. For those not even sure you're about and economically poor, help them access a 'way-outa, no-way'. May we unblock the streams and rivers for your pouring into and out. And expose the technocrats. May they go too-far in their self-revelation and get caught for their crimes. Uphold the rulers of people, who don't want to rule for the devil but love and to serve you. Banish the devils we cry. And bring about sight of your splendour and magnificence. I marvel at how you work. The detail, kindness – the grace.
Amen