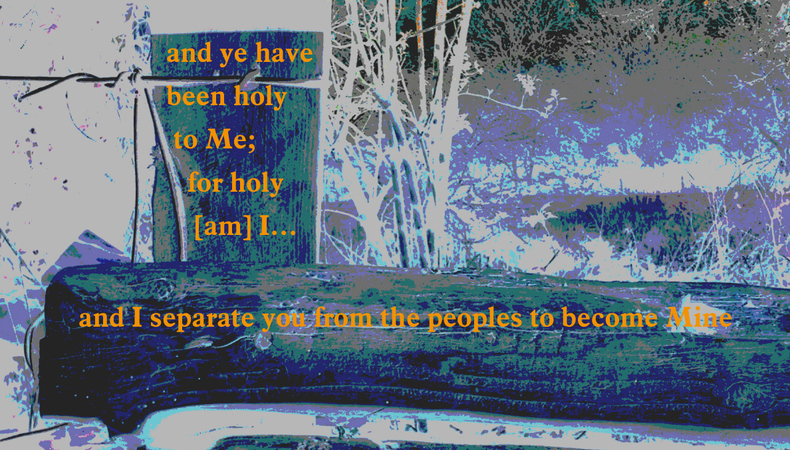 Holy – being separate/d to God – is illustrated here in the 'people of God' and their way with animals – (Husbandry).

But why all the detailed practicalities? Some could be hygienic wisdom and without better understanding the background and context God faced, not fully appreciate how the hearers received these instructions and commands.

Particularly through Moses, there's the some and some, wildly disproportionate, punishments? Reads brash and lacking acquaintance. Scare tactics and added fuel to the – should be opposed/in our always failed states – maim or 'death penalty'.

Yet the Law of God and leading the tribal conquest is the faith-breaking talk, for modern searchers. 'Nasty God' so let's, cop...out.

Understandable justification if this is the – unmitigated – case. Others have God repent of his/her murky-ogre-past or, perhaps blame Moses, or the transcribing. This not, or wasn't, God? Maybe, some of the O.T. but not all... that.

You must therefore make a distinction between clean and unclean animals and between unclean and clean birds. Do not defile yourselves by any animal or bird or anything that moves along the ground– those that I have set apart as unclean for you. You are to be holy to me because I, the Lord, am holy, and I have set you apart from the nations to be my own.

More intellectual and educated reading of the Bible throws up, face-on struggles, this is 'a' God of love and justice. Even putting that, the other way around, it's hard to square?

Two or three responses: Go, or keep it, liberal and 'higher criticism'. This puts more humanity in the verses than God might have intended and blame Moses and co, or whoever wrote fiction – not 'God'.

Another is… 'mystery' beyond 'us'. That's it. No answer to that.

Finally, is the justice-but, needs context, route. Personally I would argue out of silence, we may be surprised that these ancient ones had to be given this remedy to change toward living 'with' God.

Of course it failed. But they did ask.

Eyes-a-reckon... the symbolic and speaking-unseen is at work. The purposes therein.

There's other spectrums, cometh ye unto the Word, and evangelical thinking. One could be caricatured as, not that 'Jesus is magic' (famous-ish joke), but the word, is…

This has cartoon-like glossy ones in a Pentecostal… (now somewhat Charismatic) streams call themselves the 'Faith Movement'.

On tuther end, is 'study to make ourselves…' the emphasis on teaching and instruction, over the words themselves having… (how to say without misrepresenting..?) – as much, intrinsic power in themselves and confessing-out/proclamation. Keep more in psychological terms with a necessary 'touch' from God rather than, what's seen as some-written to be thought/verbalised, formula or mantra-ing. More, much more, power into us but not power out 'there' (whatever this might be/means). These positions at the 'extremes' (most into middle/both-ish) are also shaped and coloured by the cosmology and/of time.

The lynchpin is how we understand; active, present, instigating, materialising, mountain-moving, seed-delivering – faith.

Perhaps we can hold a paradoxical extreme? I'm certainly on a study to discover this. What I'll leave you (if/there?) with – is: I'm of the word is magic school of interpreting, interpreting. 'Magic' has considerable undermining-divine connotations, but unpicking the dross and con of twentieth century church history bares up that God is, 'like' this, or better rendered, about this.

Or better said, the cosmo is like this and the word, is God's (..?) ...sticking with the magic analogy – 'making things happen that go beyond what we'd expect'. Losing the ano, of course, it surly ain't of course, a trick.

Mark 4 and corresponding, I believe, are the meant to be key-key, New Testament passages. (Another is Romans 8).

Faith 'preachers' most-oft give me the willies and are full of bull. BUT… that's not to say, the madness on hand doesn't hide or hold, God-like sanity, on the other.

As someone reminded me recently. They'll either love you beyond sense and good measure, or hate… equally so. There are some 'things' and people who defy finer discernment but this estimation is too often the blinkered blunt.

To what I never got round to saying.

Credibility in the word/God issues, have another line for more-reslove:

Symbols for saying and praying that are live-now, in how we re-appropriate. This, in itself an apologetic about the why/what's – written. Infallible in the intent of its application. Inerrancy, in and with, its flaws(?). Therefore, I don't believe it matters as much to work out to final satisfaction the rough to un-just, 'justice'(?). And anyway, all signs toward and seen back through – Christ. So that settles that. The cross and resurrection obliterate any sense of 'God-injust', unkind, hateful and all that… Yes, reads… But….

And read-as in some ways, is not as important as, 'read-for'.

Scrappy thoughts on a freestylee. Determined to start bashing out apologetics, for the cynic through to searcher, on Truthscoop.