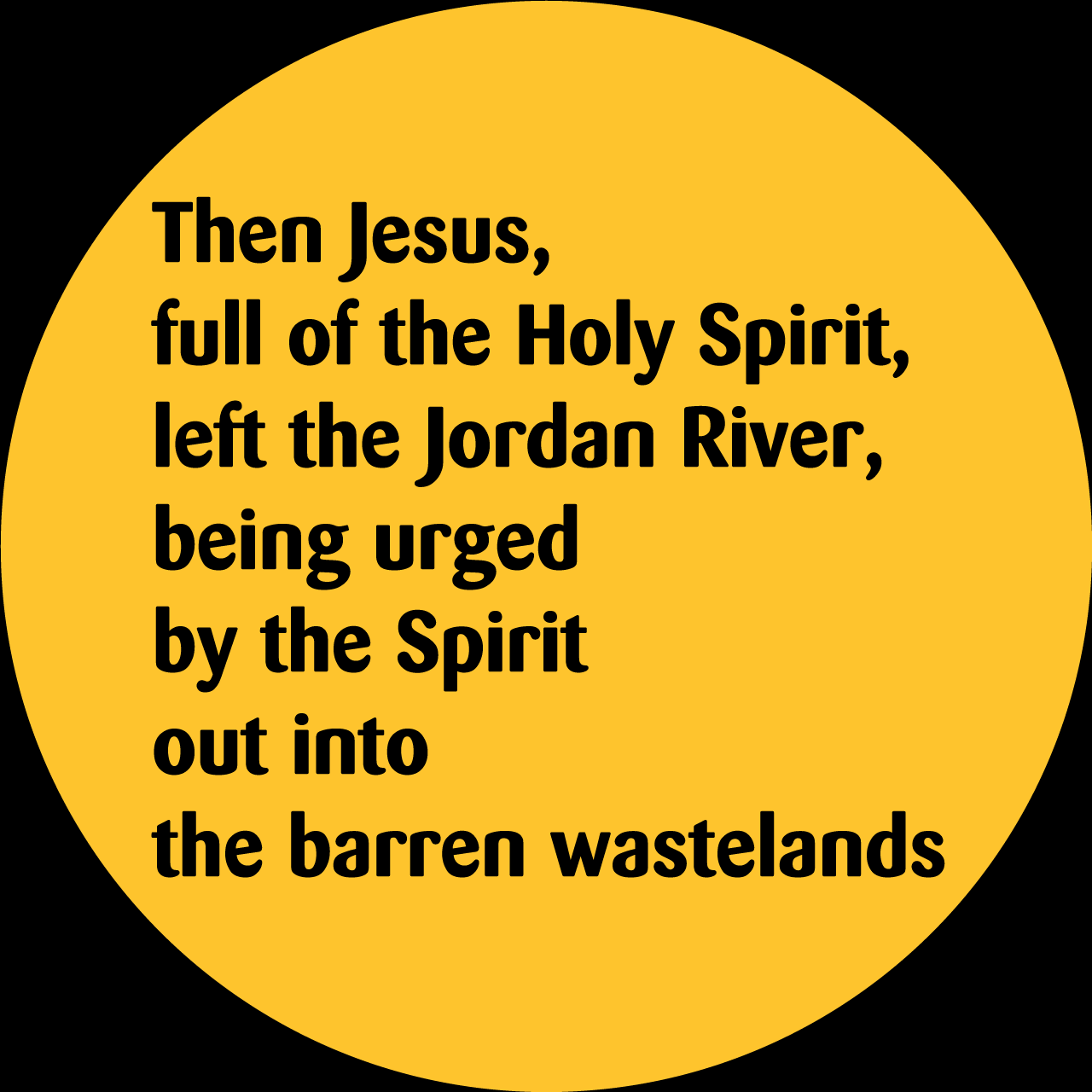 'Full' of God -- the emphasis and direction is an abandonment of all distractions. A leading out into isolation and intercession. Far from the mad crowds as possible. With 'enough God' inside, there's no need for much else. In Jesus, example and here -- near to nothing-other as possible. The call. Fasting and solitude. Thinking, and likely talking out loud, the it is written... issues and material. Knowing requires significant lengths of time. Moves to draw-out personified evil into a one to one. What attracts and attacks the enemy. Vain but presumably faith-filled from hell. An alternative bad-news vision, desperate to become a remaining reality.

On this and these three 'temptations' designed for multi-interpretations. Here are the overarching plans which awake peep see thundering in among the asleep:

A transhumanist stones to bread. Brave new worlds in worship for something re-made in likeness and said-owner. In an instant all the kingdoms... abilities. All while defying of God and the angelic opposition.

We cannot and should not make an overriding theology out of demonic claims. First off, the devil is a compulsive liar and doubtless deceived in its deceiving. Who knows how the power was 'given' but it's for taking away.

When Jesus comes back into the crowds, there's no discussion. Banish the unclean spirits of sickness OUT. No talking with and any credence of some acceptable place. No respect and no battle enough back. Faith and the key which roots all right action. Jesus:

I am not able of myself to do anything; according as I hear I judge, and my judgment is righteous, because I seek not my own will, but the will of the Father who sent me.

We are with Jesus, sent to destroy. The reality of the devilish in the world influenced, self-connecting called 'sin' in us. The same as Jesus faced, while in holy and total reliance on Father, did what we can more and less. The less bit is up to us.

More possible. So much... Jesus returned from this wilderness school and battlefield going from full, to in and for -- going out. In the power of the Spririt...

Next comes the theology we should believe describes truth come reality. The Spirit of the Lord is on me because...

How about? ...recovery of sight to the blind.

Now see why the fake events and ladling on of lie-lie-lie make up the news by the news-makers is so pronounced?

Good news to the poor? Who is the poor in most vulnerable? Children, and what's the worst news? Industrial megacorp. blackmail into the sacrificial death-cult abuse. Could we conceive of a darker horror?

But no... bleat on about the ongoing US immigration measures. Same as and been happening for decades, since Ellis Island and worse but... blah-blah-blah. Let's not investigate the facts and stats. Or consider the intent and parents' irresponsibility.

Is it right and good it happens? "No". Are the most moaning and bleating, blind as, and the epidemic of children chained up and tortured in rituals? "Yep".

Prisoners needing freedom. The children and -- but/until the 99% and blind adults get eyesight?

The 'oppression' of false-realities presented as normal and oh so contemporary acceptable. Here are the necessities to escape from.

Managing to keep the fake economies going ensures we're not mass-plunged into more-wilderness-like. Bright moves today is prepper-up for coming, no more 'quantitive ease' and go dark before the lights flicker on and off.

Aside from sung-worship in concentrated passion, Church-going is a paddling pool in the sunshine. Tommy: deaf, dumb and blind. Or should say; deaf -- ignored -- and blind.

6:20 -- spent 40 mins on this and WHAT? The next comforting distraction and yes, human-duty, to attend. What to do?

What must we do to be saved? Believe on...

That. There's that. Believe the 'wilderness' is an attitude and corresponding actions. The urge-from and God.

No wonder there's so little happening and unmistakable God enabling freedom for the prisoners.

Where are the into-wastelands fighters?

Better be me have a go.