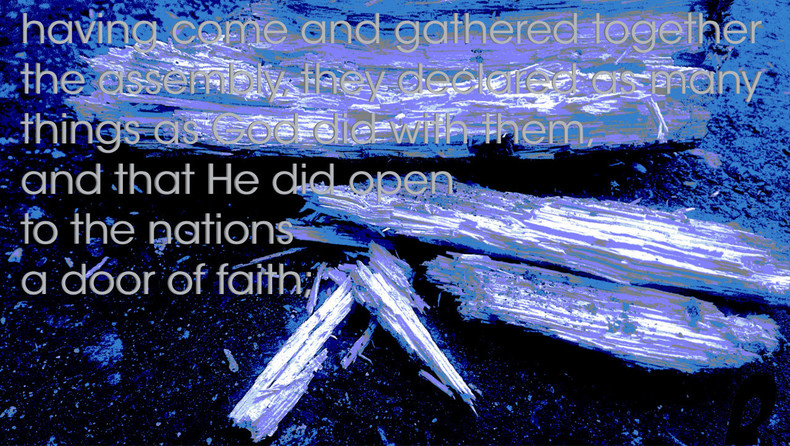 If anything, I don’t discern ‘darkness’ enough. The last two nights or maybe three, I’ve had particularly unwanted dreams when asleep. Could be natural, wasn’t God - could be the dark ones? Here then, is a rare - possible - acknowledged attribution to their works, direct. Fuel for aspects of these dreams have likely, clearer, paths. Wanton wicked, chosen behaviour, over longer in my life than not. If I look back, I know shame but only see Jesus faithful and true. And ever-straining angelics, holding on, others-prayer-answering, grace and God, and God, and on and on rescue and mercy.

Don’t know so, or consider, devils. That they hate me today for good reason is all I know. And thank God, has to be. But God... protection succeeded. And direction finally achieved.

Jonsey recently quoted, ‘I always tell the truth, even when I lie’ (Tony Montana). To this, I relate. And, could perhaps turn-into; I always see God when... ever... Lies maybe, formed in my own miscomprehension or care-not embrace.

God opened a door of faith to others. To believe. I would’ve gone with, I know that you have little strength, yet you have kept my word and have not denied my name. But keeping the word - I have not. Some enough of something stopped more mayhem and self-destruction but no... Not-at-all/not-much.

Who today, is prophetically the synagogue of the Adversary those saying themselves to be Jews, and are not, but do lie? Read the alt. news/or me and you’ll know enough to if need be, repent. We should be agnostic about details and participants of the top-floor but their thousands of executives, partners - we know. What they do and why? We can read their disclosures, see and hear their sickness. How the ‘societies/networks’ overlap and intersect today and over centuries, there’s debate - but as one of their own titled, one of their many, self-documentaries go - it’s; ‘Tragedy and Hope’.

They, are the tragedy, we are - with God - the hope. They know this and cannot, at this stage, bypass this challenge. No to pass, this era, this stage (not 'my faith for' but...), the heavens will open and God - in and is - Christ-risen will, return, and... Done. They-will-be-de-stroyed. The question is; how many dead and alive will go through a second death? Will not/have not/cannot be redeemed? (Again, another post for TS. Hopeful, conditional universalist, with burden and drive to evangelise - is my pitch).

Small aside - missed posting on TS about Cecil Rhodes (recently in msm-news). No way should his statues or whatever be pulled down (until what he represents, is) - but, those moaning, are bound to have little clue of the depths of the story behind the stories. Not an aside actually. A clue though, to the ‘syn of satan’, in the rulers dark, ‘saying’ what they are, but not.

Who/what though? For one half-ish of the awoken they are: Jewish. Andrew Carrington Hitchcock’s book names this/this way naming this/them the ‘synagogue of...’. This view has considerably grown over the five or so years of my outer-lightenment. I admit it’s hard not to think more this way as evidence of ongoing activities rigthly suspects Mossad in the frame and Is./US nepotism. The view is held back some by Christian Zionist/ism and those who react to perceived extremes in making it, zio-zio-zio, and zio one more time please...

Getting off track/trying to pray as I go here y’know. Going to finish now, many words and - “nuff now”.

It’s not ‘the Jews’ (i.e. the top-trouble-making owner/rulers are all, and about Jew/ish), when behind, whatever in this name the ‘dreadful few’ do is/called - Satan. This unseen, intent on destroying, almost all people. Including what Jews, and certainly Zion-lands and interests, to transhuman tomorrow. Kingdom of hell and Gospel defiance.

Shall not be though. No Way.

Posted a comment about a bonnie land yesterday and mentioned Peggy and Christine Smith. That why. And Christ on the back of. And Holy Spirit - power - says “No”. No. No. And yes... to revival and even the untouched of that, experiencing a door of hope. And even some, faith.

The what/if/is/and faked, in this Talmudic religion, is valid grounds for exposure. Further than that - important. But to think satans of the air won’t use even this investigating to destroy is the blind-spot. It’s complicated and requires difficult to balance explanations. I try. I try, to say my bit on... T Scoop.Yet, here’s for prayer-ing considerations - and a proph or two.

Satan obviously/if y’believe, proceeds humanity (certainly Abraham and on). Satan deceives and accuses. Therefore, any amount of accusation that can occur though our primed-up selves is, satanic. Unless, we accuse - when accurate and appropriately unmask - the satanic. If not/accurate... or misdirected, it becomes a converse-tool, that looks like it hits out at the dark but wraps back to others ‘watching’ and serves the enemy in ways greater, than any damage dome by the attack. Name the criminals, holla their crimes. Tagged (for me); NWO (plans), Illuminati (secret soc./s) and Globalist (the main old euro/anglo/US-later alliance cabal). But why in-fight? To what end. Zilcho. Rantin’ now, to tie-off.

Can or should, these specifics become propthetics? This local first century ‘synagogue’ oppressing, persecuting. That they’re Jewish? Well, who else would it be? Jesus always would be their first enemy. One from within.

It’s the whoever/and we know; has religious-like driven power, with aims to kill Christ and his people. And 80, 90 - % of humanity, maybe more. This obscenity to them of this enduring love and grace - and Power, if/when unleashed will bring defeat, through the ‘has done’ - of the cross

I can’t come up with a word. Need to get one, during t’day and then maybe...

Word/s I must weigh, is on and about a door of faith