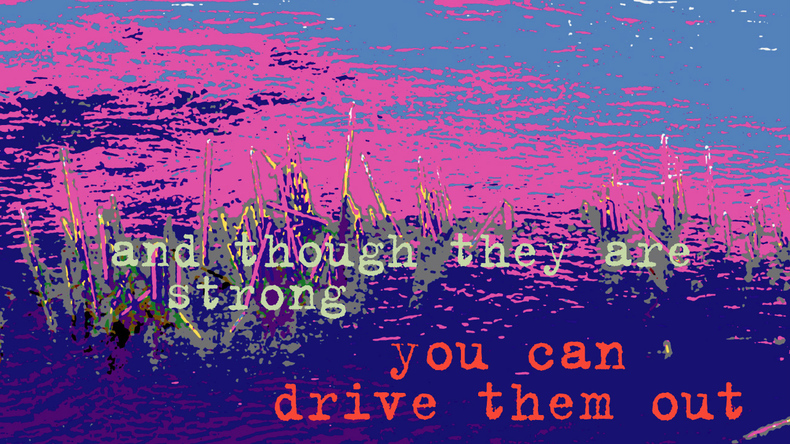 The Bible recording what needed to happen, God responding to a people for something new to come to earth. This involved land occupied and in the goings and comings, to be taken by this people, God's people.

Struggles over God engaging this way - before Christ-coming, and not-stated-like, thereon – can get transferred, into unbelief, or at least disregard for Joshua and co's activities.

The 'difficulty' it's there, isn't suggesting it shouldn't be… difficult, to live with, being associated so/with – God.

We yearn for a stop: The Wars. Or as likely, have given-up wars'll recede at all/in our lifetime. Hope in new-worlds, on-earth? This seen-most, in overturning current capital-systems, or the whole concept and das kapital. Marx – or the more 'idealistic' y'go – Bakunin. If not here, perhaps other streams of consciousness, will flood in? A New Age, an osmosis into enlightenment? If not into this; No earthly-hope and down, down, down we go, believers.

Church-ers hold a straightforward, either/or, in this 'no-hope' in w.w. improvement. A subsection future mapping includes worldwide; sudden/spectacular, church growth, aka revival. Most, see nothing but ever-more demise.

Others dig-in, with noble-looking non-church. Peacemaking for Jesus-like political influence, towards causing some respite. God's will; and then, 'the end' will-come.

All this buried, consciously still-care-about, or not-so, in; survival, or sex-is, or intoxication, or arts, or loved-ones and/or things – while always wrestling, “why should I care?”

This the 'why'. Why? I don't so know...or expect for it. What I find, admire and encourage. Mine and likewise – a gift. God in… does it, enough to hold shaky-self, and otherwise.

And not these 'lands'. Ones we barely sense are 'ours'. This isn't Syria? They've conspicuously more-sense about, and connection with a land, that if comes to – will die for. We aren't so sure what 'land' means?

There are those who say, the economics around accepting refugees into the UK isn't the issue, it's previous Government policy, that's impoverished us. And 'blaming immigrants' deflects us from the real enemy, the 'rich and powerful'. Well, yes, the policy – and obviously intended, but the migrant 'cost' continues to deplete all in this land, (and not insignificantly, regardless in comparison to previous drain-a-ways). The main problem, is its designed, to have these Euro-lands become 'no-people's lands'.

Why are virtually, all the 'home'-less, taken in by Euro nations? No comparison. Because it brings division and – dilution of any last remnants of nation-based identity? No more land/people/home/ours. Conquest by stealth. Where in the Bible – other than, in Christ – is identity, among a tribe or people, dismissed by God? An idol, sure, like just about anything – but 'nations' are not written-up, for pre-Christ-coming, dismantling. At least not for Christian backing.

It certainly makes no practical sense. So where is God's socialist appeal? Local and local-local at that, maybe – but global?

Yes, 'taking the land' in biblical history, shouldn't sit well with our anti-expansionist sensibilities: Misappropriation of the Biblical stories of conquest encouraged the entitlement of empire. and of course no mandate for, 'if God then/do-now' mentality but that doesn't stop the pervasive influence.

Today we can only evaluate God's will in a pragmatic justice/for less-empire. In this God will and firmly does, side-with.

The 'religion' of 'the' dominant empire, twist these stories and the Bible as a whole, to back their 'behind local-based conflicts'. To them, these aren't antiquated myths but have contemporary out-workings and they consider 'power' in ritual use. They're not necessarily read, one way or the other - in other words, coded, mixed-up narratives. They do believe, our (The Christians) 'version', is a lie. But again, only some and some.

They want to reveal, 'what' they believe (so-far), but like world 'news', keep enough sufficiently hidden, to satisfy their perceived purposes. It's cloaked in the symbolic and cryptic.

Those who've seen through this great 'nation vs nation' deception, are those who follow links back to empire. The empire. The British one continuing on, somewhat obscured, influencing and more or less, ruling regional governments and/or stirring tribal-ism.

Not so with Syria, Iran and Russia.

This Anglo-American alliance, old European. Families though bloodlines, 'royalty' with conversions-into, from elites defined, whatever else – Globalist. It's not 'British' at all. It's anti- every nation and person. All identity. It doesn't believe in people. Only in themselves. And them-merging, with what they're fooled in believing on – and 'beyond' the material. Us with-the material. By them, deluded – 'god'.

Thing is about their 'dark-arts'. They are strong, (following 'these' and all, relevant words typed or spoken into technology) and got tons of material powers, including, publicly-unknown innovations.

But unseen. God says. And they know:

We can drive them out.

Their prowess is the reverse, in the unseen. All the physical power-brokers, this 'lot', are dead (in more ways than one) – weak.

my people, who are called by my name, will humble themselves and pray and seek my face and turn from their wicked ways, then I will hear from heaven, and I will forgive their sin and will heal their land.

As Eric Morecmbe would say, “there's no answer to that”. For them, that is.

And God says, 'ours for the asking'. Not to underestimate or undermine, true-justice based activity. A necessity. But without the unseen winning as much as, and more, so…

God help us not read the Bible but get-why and reach out to you, through, the Bible. Give us a vision of your view of us: In you, In Christ – able to be your answer; to deception, suffering, injustice and hate not love. We stand, with you – oppose and resist. We need you, we can have you. Have us make this connection. More so. So much more. In you God, In Jesus name, we call.