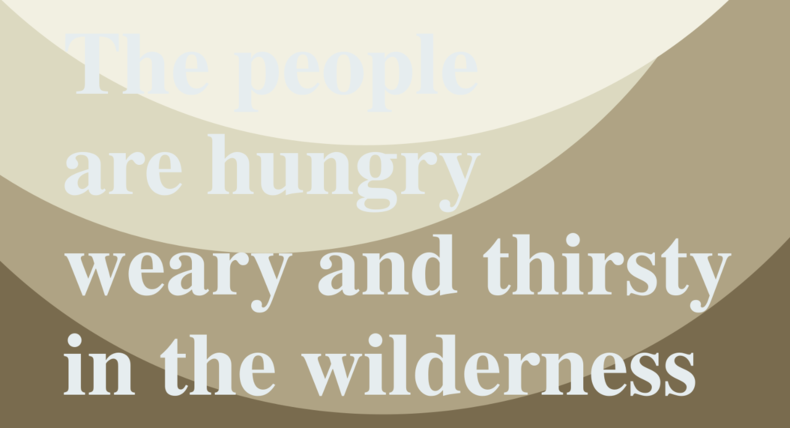 To get up man of God early, we have be asleep, child-like early. Oh, be able to run, on less sleep.

The weary and the wilderness. Toughest place. How much not-tired, can we meet and manage -vs- ?

Quaintly called 'Quiet Time' is Christian mainstream, aspiring to the benefits of some remote-off and getaway. Reckon/gotta be, the, most opposed activity. Enemy central: Keep us busy and feeding 'stuff'.

In pastures blessed these days but one downside is 'watching the news' at tea. And another burst later on. It's truly shocking. Still. After months, and previous years, abstaining. Incidentally 'The News' – isn't. Contrived to message lies and massage us into 'death'. Compliance, virtually never abates.

Yesterday/trying in a few/...say three-minutes, to explain the great scam to a Christian, found myself emphasising, the microwaving, mind-control of life. Vaxxed without needles. The screen I'm looking at, frying-back on to me. The utter psych-rewire going on.

Why the smug-a-meter in overdrive this morning (but not too much, or the scam-o-meter wakes up)?

Here's caught-lying-often, apart from deceptive bias, The Guardian; Vaxxed isn’t quite as inept or loony as YouTube docs in the vein of 9/11 hoax film Loose Change. There are even some stretches where it feels like a real (albeit boring) movie.

If it's reasonable, sensible – mature-adult behaviour, to disagree with a controversial film's conclusions. Perfectly possible if, reasoned debate, ensues. Well, mark this day in the history books. Robert D has set one off. A rare one. Burying'll be quick-as though.

Too late. More thousands are gritting their teeth and repenting at every breath that decries.

Why such a 'how dare we' question?

My conclusion has moved over five years. From; “if only they 'knew' they'd…” to, “if only prepared to face… to, “too proud to change…” to, “too scared” and now, my conclusion is; it's been downloaded into us.

In some ways and represented by: We believe the box and masters.

Even walking through 'town' feeds this buzz. An appetite for them rays. All projecting what we say 'we' don't believe but… guess what?

The chattering class, who lead the laws and like, insist the prospect e.g. 9/11 might not quite be… etc etc. is, inept or loony. So much so, (we) don't like to write about it. (Apologies, nine years ago – under the quote/title, 'They're all forced to listen to us'). P.S. 'Still-skeptic' there's validity, and no disrespect to 'Loose Change' but films even-better, are out there. For a primer article, including five-bobs worth from me, 911- the Crime that Will End the Empire.

My suspicion, is the mental-put on, is a psychological make-over more potent, than even most alternative perspectives would probably consider. (Re-reading this line, like me, alt.think, is likely on the 'same page').

But it's ok, “we've ALL, been had”. Not something anyone can throw stones about. And, we always will be, to some degree. BUT, as James piece titles and cries, we've 'Empire to end'.

My conclusion is the wilderness, in metaphorical and to some extent a literal getting-on, is where the voices of truth and valour are heard.

Switching the machine (you are) currently using, OFF. I've recently started to, by the clock.

In 15 minutes and until 5pm.(Unless to earn m'bread). That's me... almost so. Best would be. Fast best, far as. And a little, better, than nothing.

Take us to wilderness to cry and meet you O God. Thank you.