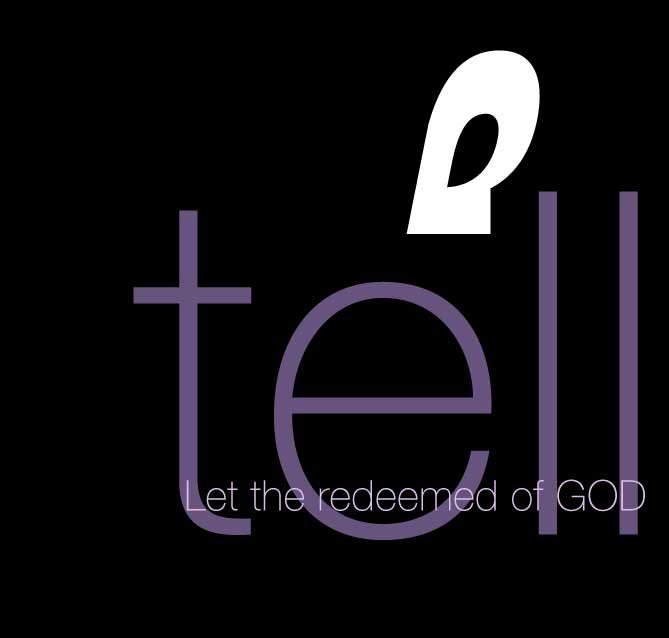 O give thanks unto the Lord, for he is good: for his mercy endureth for ever.

Let the redeemed of the Lord say so, whom he hath redeemed from the hand of the enemy;

How can we be redeemed, if we're not free at all because the 'world' is in lock-down? Answer given. Those in physical chains and cells, not only in the early church but today, are free… inside. This what matters. Inside (we're) out.

And some get social and speak-up, justice for the poor. Two approaches. One emphasises building church that's social-care. Other, wants the Govt. etc to be answer and be 'Christian' in its redistribution of taxes (in these times, this equals, debt in the fake called currency).

Otherwise, telling is said to be, 'all personal' testimony regardless what else. Become a Christian, all that counts. Eternity all. What's earth got to do with it? It's 'enemy' except our soul escape. Or not.

What do the redeemed do? They tell. What?

Jesus on some occasions healed, asked the person to keep it down. Don't tell. On one he did say, shout-up. Circumstances change.

And there's a time for peace and a time for war. Regional in context, but when are we at war or peace?

And how the famous do? Problems associated, Jesus knew, and how this enemy has a particular thang about fame. Was able to manipulate. Crowds and power.

'Fame, makes a man take things over…' sang Bowie. But he maybe didn't believe so much – not: God good, and here for us. Understandably, not got motive to leak somehow, anyhow, that his immediate bosses, are – evidence looking – deep in central HQ of a/the, destructive death-cult. Yes, here to 'take things over'. He may well have declined the alter call? There was independence about him. He seemed to love. Some.

On the other hand, Prince, is easily in his league and arguably, even more talented. Not getting quite the tears and trumpets? Mmmmm? Why might this be? Maybe he seemed to love. Too much. Too many. Background? Witnessing? And considered there-be God?

And puts one and all who hear into the 'valley of decision'. Crowned (trust right now is), Top of the Pops, tell-truth-er. Cared more, than cost to spill; Who and what, he's trying to escape from? And ALL are. Thoughtful that. And brave. Brave love. For why do? Hardly had role-models. Peer pressure was threateningly against such talk. Combo: 'Religious' idealism, that 'hot' a musico, 'people loving' idealism and just couldn't-but-believe Must:

Lay our lives down for… the only kind of telling that matters.

Or maybe it's all a trifle miss-exaggerated-overstanding, loner nut-job, now 'drugged-up...' Read too many comic books. Ghosts, gremlins and… conspiracy theories.

Listened again to this. Perhaps any happ-on-this site, still oh-sceptico? Might you put on y'detective overcoat and hat and hear a couple of witness statements?

Jesus was to die as did, for us. This, the intention. Note. A conspiracy, false-flag of sorts, a what we are surrounded by today, here, there and… – was in, the initiation of it. Local illuminati got others, to get the crowd stirred for him to to be called-out, as the one to die (and not Barabbas). Romans knew all about how to do this. Proxies and patsies. Standard op. Taken as read by their vassals. While masses 'follow the hand' – dad da-da-da – a rabbit.

I can hear a bird outside singing. Decades back, would've been noisy with 'em. Why? Can we not know? Is this so-mystery? Leave it is best? Nothing Prince might know about, press QT about, I suppose?

Out, glancing up at a box yesterday, reporter said; “...getting on with things, as though it never happened”. But likely, never did. Around 'certain', didn't, as reported.

Reporters words sum up our stoic-sickness. Arrogance. Rather die than be wrong. Sheer witchcraft, (with respect to those sincere and not harmful at it). It's such a descriptive word. 'Bewitched', another.

It's because believing-not, to face the enemy for who-is and does. For a Christian, is – Rebellion. It's a denial of the Cross and why Jesus died. For what? To have us pretend corruption is what the papers and box say? Delude ourselves, it's all 'part of the plan'.

All felt the crowd around, the calls and shouts for “Barabbas”. Some joined in. Who'd have thought better? Because others-most say-so? So then, 'say I'. So it goes, so it goes. The pipes of Satan whistle in dress and tie. Look ok? Let's follow. Or, hide behind a mixing-desk. Smile and take another line. Suck corporate anatomy.

The net. Jesus knew fame would be manipulated and how it's the beacon we cannot ignore. Famous Christians. Please note JW's (met and know this), are the most publicly awake trad. religios. Muslims the other way-ahead. But 'they'still take a lead from their authoritarian examples. Who don't speak-out publicly. Excuse or not this post. Puzzling in prayer as go. Controversy.

It was playing that clip that includes Prince pointing. Prophetic 2016. And DeNiro. I'm not one for the answers in the stars doing it/what'll take. Becoming Christians, or anything else. But thousands of seeds are scattering this weekend. Oh Hallellujah.

'Drugs'. This the word. This the enemy devices. Never mind the labels, trust the 'doctor'.

Tell. Tell… who, what the enemy is. And who, how and why we can be redeemed.

God, may momentum for lids-off, gather and stop this takeover. We cry for the unsettling. The unraveling. Apocalypse and now. We need to make straight the paths with truth and you, to arrive. On earth as it is… your will. Amen.