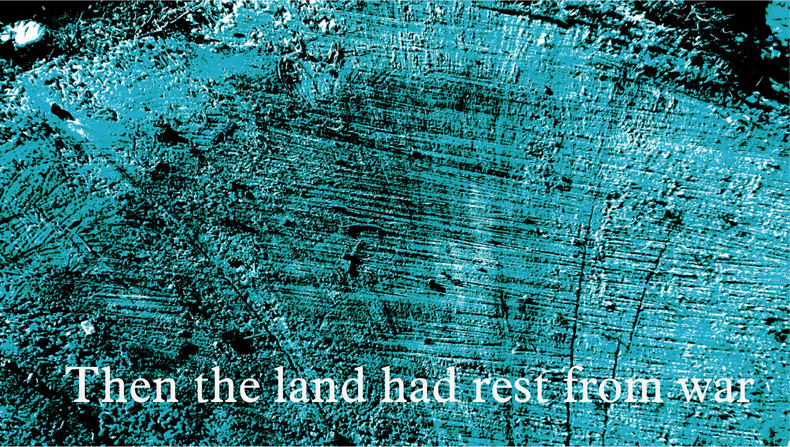 God hates 'war'. Represents the opposite to creation/ing. Is the opposite… and death – over living. It becomes a righteous necessity, to be 'won by' and for, liberty and goodness. When those who lead, genuinely engage towards peace and have to fight – or; taken over, enslaved and be purged to death? God works with it. Works in it. But God hates it.

War is provoked by all that stands against the purposes of God's realm, that's coming and comes – into this world. Tribes and their earthly rulers are sometimes driven by self-madness and motives. But... most often, and in all the major ones – certainly for the past 250 years – this isn't the case. It's a con believing otherwise, keeping an illusion going that evil 'could never be that well organised and centrally purposeful'. If only.

But wars not-seen behind the wars that are, purposes to stop the Gospel being preached to all the world – because – then the end will come. God wanting this to bring about redemption for the many, and most, on the way. The enemies intent – to steal this capacity, kill, and destroy. Like a cornered animal in a desperate frenzy. But with a trans-global hierarchy. Not able to, or intentionally so hidden – that in itself, a necessary unfolding. Revelation, that's partly, the method.

In understanding wars, we need to get beyond the impression we're given; expansionist dictators go rogue and meglo(maniac), or some relatively minor flash-point becomes the mountain.

It's finance, one layer deeper exposing central-bankers, and beyond their personal or cooperate gain, the development and publicly recoginsed formation of their world-wide, elite-cult. Not 'theirs' but their entities and allegiance.

Talk about 'red flags'... it hardly takes much looking past pop. T.V. history to find this out? Notwithstanding, different disputes within a reasonably competent, agreed understanding: There is no controversy, the world is primarily running under a one umbrella-conspiracy.

And their 'why'..? – deflecting us to it's 'all and only about money and power' – when it's all about defying the living God. And this, through re-configuring God's face in, and love for, humanity –
and creation overall.

Proving this by increasingly, ever-threatening actions and moves, in a world-wide transformation. Brinking it on, to the next next-stage. They know what's to be done but there's some inner-fighting and struggles with the operators and - "blow the trumpet"- small, but sufficient opposition in humanity, keeping the onslaught back – thus far. A turnaround.

And-what, me here? What to write?

I'm not here to so-try my arrested-development best, to sound smarty pantsy. Sadly am tryin/but shouldn't so. And time is… what it is. Limited. So must I. Limit the tapping. The net is just that. To pray, best – and if at all, find something to write 'of God'.

M'attitude, is to those reading this doubting 'conspiracy' – you'll continue... until you look. This a blinking-signpost, to get on with it.

To those who know, but Christ seems a distant and vague possibility: I'm here to proclaim 'think again' and act, do something, and see?

See God, for who Jesus is.

As to the prophetic? Need to hear.

God open my inner-ears. I can let the past or some future thinking trample your whispers deep, underfoot. But mustn't. I need to come to places 'where' I can hear. May I do the must-best, and not what feels otherwise. Open me to the purposes you have, the only ones that really matter. Thank you for rescuing me from ever/any-more, cul-de-sacs and roundabouts. Let me see your visions. The love of God. In Christ.