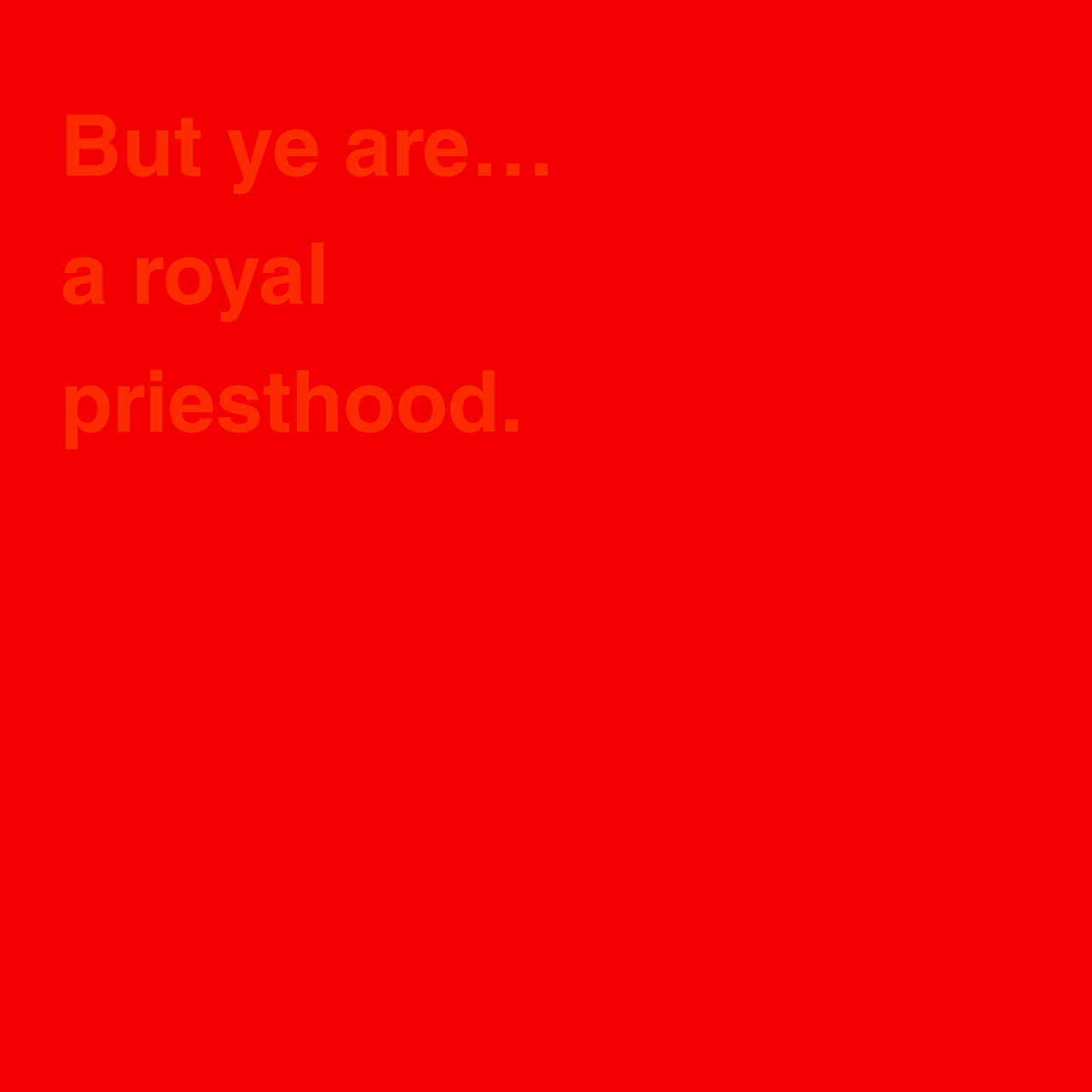 Too easy and get narked and negative. How to preach grace-talk and find a word from God? Somehow; judge not according to appearance, but the righteous judgment judge. Here goes:

If ever there's a biblical misrepresentation. 180 degrees from its God-intended meaning and thereby the role follows. Not only this but a misappropriated word out of 'Old Covenant protocol'. See NOTES. ( -- a spanking new, PaS feature, no less).

Priest, Minister, a "Pastor" even... although, this the best of the lot for it represents an active role and Pastor-ing. Begs the, "where are/those, you are..." question.

As for a man in a gown, someone who can speak of 'hearing the call' and here cometh, up the front, with a smile. Well, not the best -- aka 'sin'.

Supposed non-conformists have their theoretical get-out. My experience is the draw to act clergy-wise, too strong and they swoon along. To what? Let's get right to the 'grace bit':

God works, in and with, those traditions of men that should nullify the word and good. Gets deep in with grace and graciousness for higher purposes. Even though never-sanctioned clergy continues its unwanted devastation and contribution to church decline.

Yes to the bedside and in a crisis calls upon. Distinct community figure among local leaders. The manse (house connected to ch. building), a dog-collar in a crowd. There are some pros. But... the people languish because.

Written lots, that the trouble in the uprise, is the question -- to what? Misrepresentative, representative leadership, is an unmistakable disempowering spanner in the engine. Its up's leave a trail of downers. The main one being it shifts the optics. The view and vision obscured. This goes along with the commodifying and denominational-based local church. It's a corporate-like led affair, so no surprise, the crumbling numbers, and effort by the flock.

For a couple of decades -- 70s/80s -- there was a shake-up and renewal in the UK and similar parts. The key revelation within a charismatic reappropriate and appreciation was 'body ministry'. One to another, each one teach one, moves from upfront and stare, to a circle. At least in some respects. The front generally remained but the river let streams seep and slip out. Before you knew it, function-ing proceeds titles and newfound egalitarian opportunity.

Can understand why? All and many -- within light but enough oversight make focus be about God and everyone and the whole mass of -- get moving.

Looking at the Gospel and an awakening? There's the World aka the empire. The Flesh with the new levels of techno-based intrusion and manipulation. The Devil and revelation of the method, child kidnapping for rituals false-flag devices. We are not about calling people to listen up but get up and become the voice. Replication. This is the fruit. Not an audience but a rave. An army, more than and at the least, a hospital.

In the 90s Church had a first and last alternative jump up and go. Nowadays the worship scene in the US is where the action at... of sorts. At least the songs can be engrossing and encapsulate.

The Gospel is... an awakening and our God-running-to response and ongoing fasting, fitness, and faith. Jesus dies to release us and as many from The world, The...

A final dig: 'Leadership is male' goes with designated other and Rev. etc. profession tag. All a lot of unhelpful, in community building, God's reigning people. Like most 'sermons' -- the outcomes are lame because designated input lacks power. In spite of... there are churches bucking the collapse. And if healthier than not -- hallelujah anyway.

The GRACE in -- is how God works in and through such diversity and sub-standard behaviour and slavery to trad. And is not-into more pointed direct addressing who and what put right cries. Of course, not here any/much in nos. and readers but even so... God wants us to show comparable grace that God does. Demonstrates... In our knowing God working, this is in our lives -- the conviction.

How little there is in the New Testament about structures of community and leaders. What's there is free'd up and active stations. A sense of momentum and social living. Or recluse off and solitude. Fast and feast.

In the soon-come state of emergencies; be like the most-persecuted parts worldwide today. The body is the body because it moves together. The head is Christ and united we live/fight -- worship/pray.