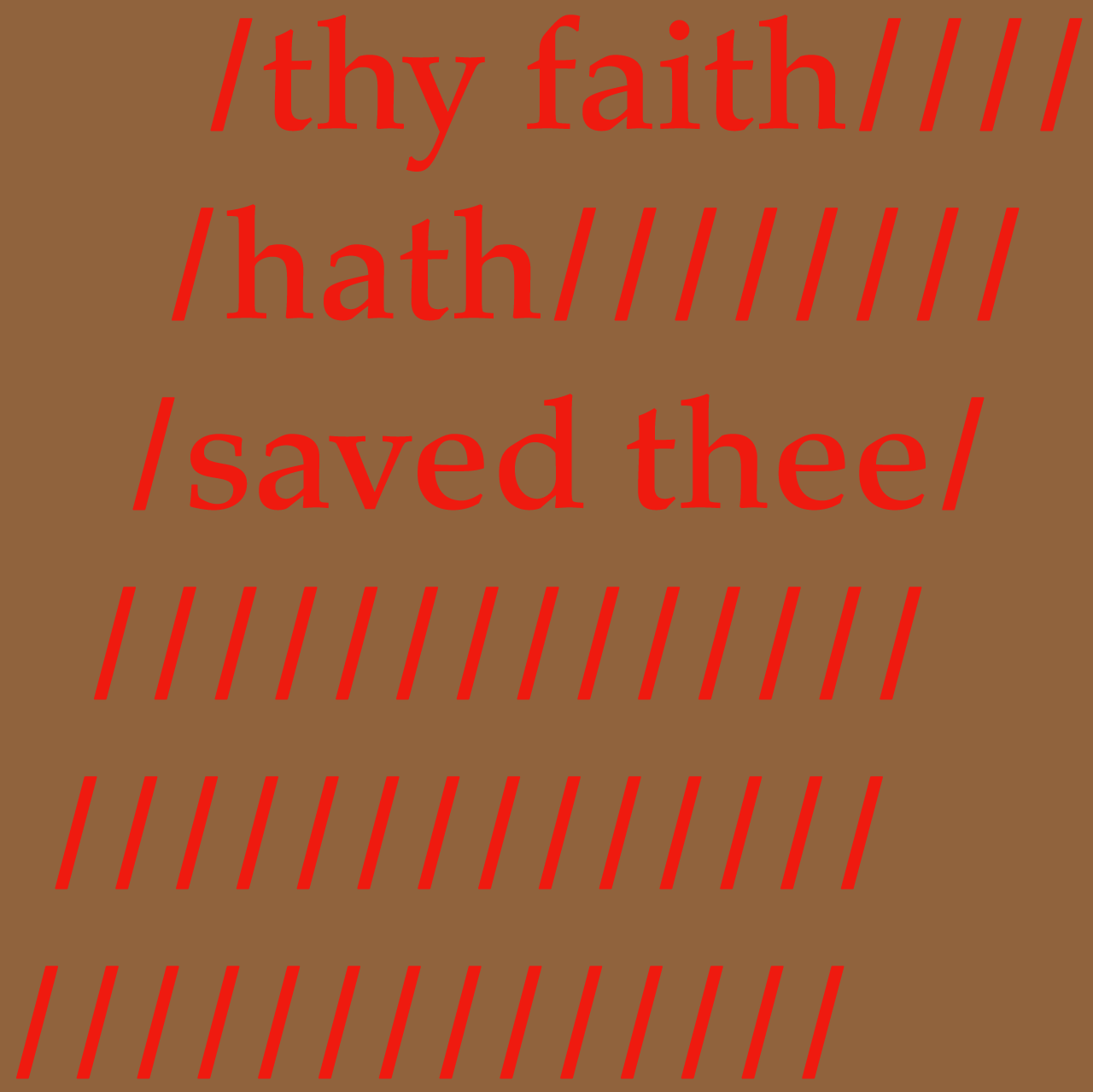 Took knowing suffering... and what Jesus-can-do. Pushing through and opposition surrounds -- here, a crowd -- for one thing: a personal connection. Urging toward 'could be' and knowing if only.... God surprised... and into discovering. Yes, explained in Christ's self/given limitations. Yet, another scriptural presentation, blowing holes in 'God's in control' Calvinism.

Rather and revelation: God's in... to... working and a zillion times at once. For future events to occur. In potential. Sometimes assured. Always the present reality and in our now-times at it. This making sense of wild and expansive universal claims to care. While the seeming God-absent-looking mess prevails all around. The historical 'How come, if God...' Question. Answered by countless random, new offers or pre-ordained activity -plus- acceptance -minus- resistance. Or, how about Solzhenitsyn's; 'Men have forgotten God' and missing human-ity?

Nowadays sum-up is Richard Hell's prescient yelp and '...I belong to the blank generation'. The put-upon mobile-electro slammed into a stupour dominating mode. Why revival tarries.

We/are who, God reacts and responds, with/to. The setting up of billions of opportunities... encounters through direct action, seen as synchronistic, signs and wonders. Setups and adjustments. Assignments and God-incidents. Most often, they're missed, yet many times revealed. As we move around and bash about and into, the workings of the engaging one.

How about the suspension of justice for grace and allowing for our experience in this. The love from God which defies rights and demands. Justice through The Cross.

Here and 'the woman' in this story argument, made for believing causing the decisive and yes -or- no happening. Jesus doesn't place the emphasis on being the healer but on what brought it about. The actions are physical, assertive and from a desperate one. The one among who thought "if only...".

A prophetic act. Touch to change everything. And the world is groaning. We've always been quick to turn and kick at each other but Tavistock etc. are analytical at it. False-flagging punch-ups. Psyche-war winding. We are being cooked by any and all that seeps and put on. Vaccinations post-birth (too many and insufficiently tested) and coming-5G is devil-central charging upon us. Full-throttle damage.

"But God..." and will we hear, re-lighting some other and holy fire?

Low or no needs -- for many -- are about coming emergency bubbling under the world jolting and languishing on. Three possibilities: The urgent and alarm; slow decline over decades; or the latest pop. Christian prophecy line and a resurgence and socio-economics in the US.

Having done bad and mad reactions to the first one a decade ago could go with nos. 2 but don't. As for three? Based on God's not only in now but 'showing them' what 'is to be' because 'to be is already -- for God -- done and happened'. With respect. Hearing a short burst of this Donald 'man standing in the gap' Trump line at least urged prayer/or? Excusable Calvinism when words 'if' and 'we' are prominent. Counteracting and over-riding the slavery-to-Reformers theology. Re-working of -- because many of them did right and amazing stuff leaving this mod. version's hyper-ing at bay.

The call to faith is paramount. Got that. God's faith in us gifted but got-from by pressing past the 'crowd'. 'Faith for what' though? Think it's pre-war prep time. Not war-war nations although can't be sure-not myself. Like 'nuclear' concerns, the bomb likely another con/lie/job. But the weapons are deadly and could kill etc. millions in a day. Hours. An hour.

The markets teeter and quake. The faith-for injunction is for a people prepared. When such prayer-doing we see the promises renewed and fulfilled. Revival times. The second-temple zionist madness is a pseudo-think-second-coming driving foolishness. Bible-reading gone bonkers.

What is God saying? Read/hear/watch, see little/if at all, ANYONE... having a convicting clue? Found Sane Progressive last night on Facebook. (Hadn't seen for a while since no YT except live ones keep missing/she doesn't re-post). Her tone -- even though not 'into Jesus' -- has the right outrage and dismiss the seen political wisdom batting about. Should get off again, all but smiles while screams of her raring up on deluded ding-donging. Spur forth urgent and compassion. Bit of wisdom with verve.

Best (aka not sin) we can do is, 'be careful how we listen' (so saith Jesus). Less and less 'about' what's doing and somehow hear what God is saying. Have faith for...