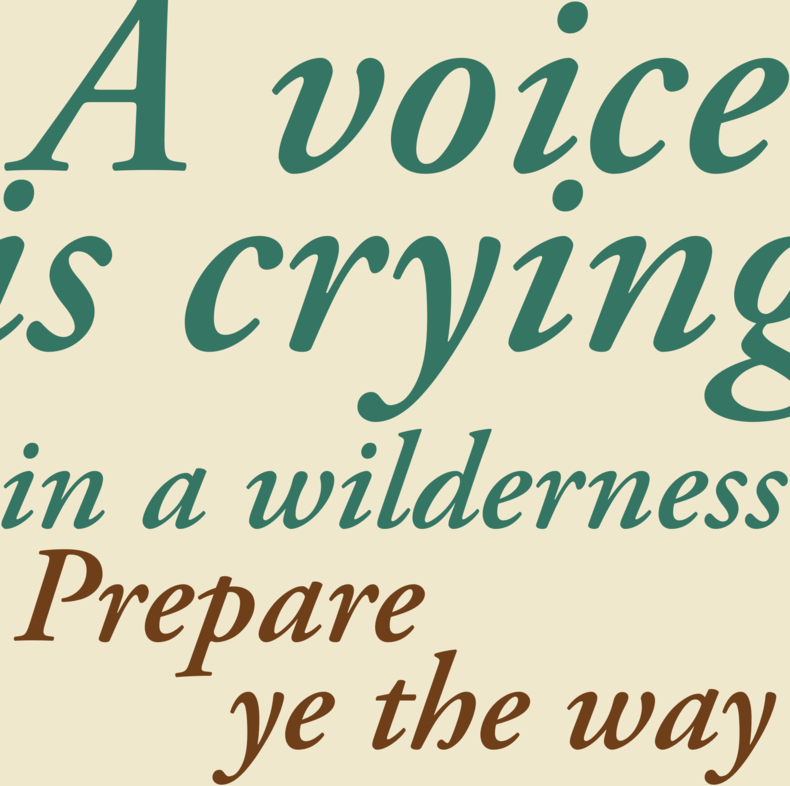 How to 'speak tenderly, offer comfort' -yet- cry out?

All and But… might be looking so good – this we're instructed to big-up do. Maddening maybe but reflects God. Somehow this our magnificent master and radiance beyond imagination one's attitude.
Sometimes though, in grace needeth repentance:

Take these – most-covers all – simplistic stumbling blocks; Calvinism and/or Zionism and Marxism and/or Anarchism.

The last one included to cover certain variants on Marx and the 'leave the Govt. to building local church as the alternative community' talk. Which I tend to agree with but about-what, what all those holding this likely stumble over?

(And as for not calling Marx, Socialism or what-not, it's whatever is; 'build Jesus-loving Govt.' and all about getting, so-called rich to look after economically poor/socially excluded. Again, not without my personal “amen” but…)

Here's the word. What about the 'voices in a wilderness'?

The ones that aren't in the papers on telly? Marginalized from the respectable commentators of left/right – in-between – and a-political thinking.

How about those 'other people' who know what... say..? 'Tragedy and Hope' is.

That really do believe this self-disclosing elite yet publicly-wilderness voices claiming:

'The argument that the two parties should represent opposed ideals and policies... is a foolish idea. Instead, the two parties should be almost identical, so that the American people can throw the rascals out at any election without leading to any profound or extensive shifts in policy. Then it should be possible to replace it, every four years if necessary, by the other party which will be none of these things but will still pursue, with new vigor, approximately the same basic policies.'

Of course many sort-of believe this. Ok, do. But this quote is within an alternative 'insiders'-view that, whilst Quigley (the writer) would've prefered the manipulators admit. Would have preferred we're brought fully in on this locking-down manifesto. Accept the cull.

We've arrived 2016 where this is the latest trend: Frogs sufficiently boiled into a psycho-frenzy the cooks are rattling the pot. So cooked – the expectation is, we'll reluctantly “go along” with the meal.

Not 'democracy – two wolves and a sheep voting what's for dinner' but a small pack of wolves among wolves, beginning to howl that the masses of herds are to be killed. Those not transformed to serve part-robot.

Voices/wilderness – Cry out. Didn't come upon this verse/the readings… before I'd written on another 'wilder-voice':

'I might have no-hope for us but ‘in God’ coming through but would at least encourage we talk us-up and ‘them’ down. This thinking I’m scrabbling in the dark to see more about. All to surmise is: What we all write and speak back – Matters. May Jim Fetzer's book/series to ‘Crimes’, continue on strong, gathering us voices in the wilderness. Thanks.'

An answer from the pews – or stay-at-home – churchy-ones could be; the information is too novel, eccentric, exaggerated… too – in the… yes – wilderness.

And like The Prophets – Outrageous. Upsetting, extreme. Therefore, “run away”.

This would be deniable and not case for urgent, earnest conjecture, if rationale thinking held-up? In many areas it's easy to test. Assessed through:

Or... such consideration, considered unable to be assessed without 'faith'. (Hey, that's what most people say about investigations on 'God').

But science, observation, deduction, logic, probability, public testimony and witness about the most-central events that dominate our social discourse? No public or re-buff-back?

Unlike Isaiah etc who had the Kings and likes chamber to contend with – we have our version; Mainstream Media. Mainstream pundits, writers – bloggers, even.

Gate-keep the acceptable and debate. There's Left, Right and Anarchy, Libertarian.. Social Democrat, Lib's – you know the tribes. Ones with the stages. But as for...

Wilder-voices. The ones that by and large transcend social-order ideals, speaking to the ground we live on. The fabric and the fashion designers. The sickness and the tiny percent.

Of course all can click 'alternative' but validity to bother is kept firmly undermined through to current moves and – gagging-up most outspoken.

The Church adds the 'stumbling blocks' aforementioned. Will Not Look – because? The need to 'believe' supposed theology of God is potentially challenged-too-far, by this claimed-closer analysis of history and contemporary discourse.

This argument is easily provable. Where are those who've looked at and commented otherwise?

If I had an audience and said what I consider is from God? Would not Jesus-loving hearers weigh and proclaim a response?

If not – two scenarios; not bothering to even listen -or- no response because… there is nothing much contrary can be claimed? The lie might be – “but we'll live with, thank you very much”.

Without a drop of glee and much pain:

Evangelical and liberal church are without legitimate voices from God today.

The closest we have are in a wilderness – but these prophets are ignored. 'So the world… goes the church...'

Certainly anyone public enough to connect through a search engine. Those who proclaim 'words' from God, self-branded schools of prophets, are so self-evidently wonky and church-absorbed, it serves no purpose to explain.

(Note: Not without historically demonstrated Biblical conditions being met any 'coming', which requires facing truths about this world. But no, count earthquakes, big-up Israel – mustn't get close to questioning 'this' gold-cow. Apologies if offends but try to look up the multiplicity of meanings and what 'Israel' in the N.T. let alone the whole of scripture means? Here's some ideas/help – not even fully-dismissive re a Zionist reading.)

And more sound and sensible types… still non-engagement with 'out of the wilderness' talk. Not a word. A blog-post. A counter.

Screaming silence. As though it behooves not to lower (themselves) to such trash-talk.

I don't sit smart and pretty. Consider myself, with personal-historical validity – a right turnip. But truth telling isn't about my personal credibility or what: It's about honesty or fear.

Knowing God's lead to pray, although confess to bucking and bulking away comes with 'signs' that God wants better than not outcomes for this prison planet. If I knew little let alone no-leading, I would conclude, get-through and go-home is all that awaits. But – signs-a-following.

Thank God.
Babbling-on previous posts include as links to repetitiously assert the cry but I intend to begin spoken word any-day and do my best to only write/speak more vital impressions.

Anywhere? Show me a Christian who dares to engage?

My heart grieves. Truly prophetic is marginalised. Here's a word