Don't Wanna Be... A Prisoner 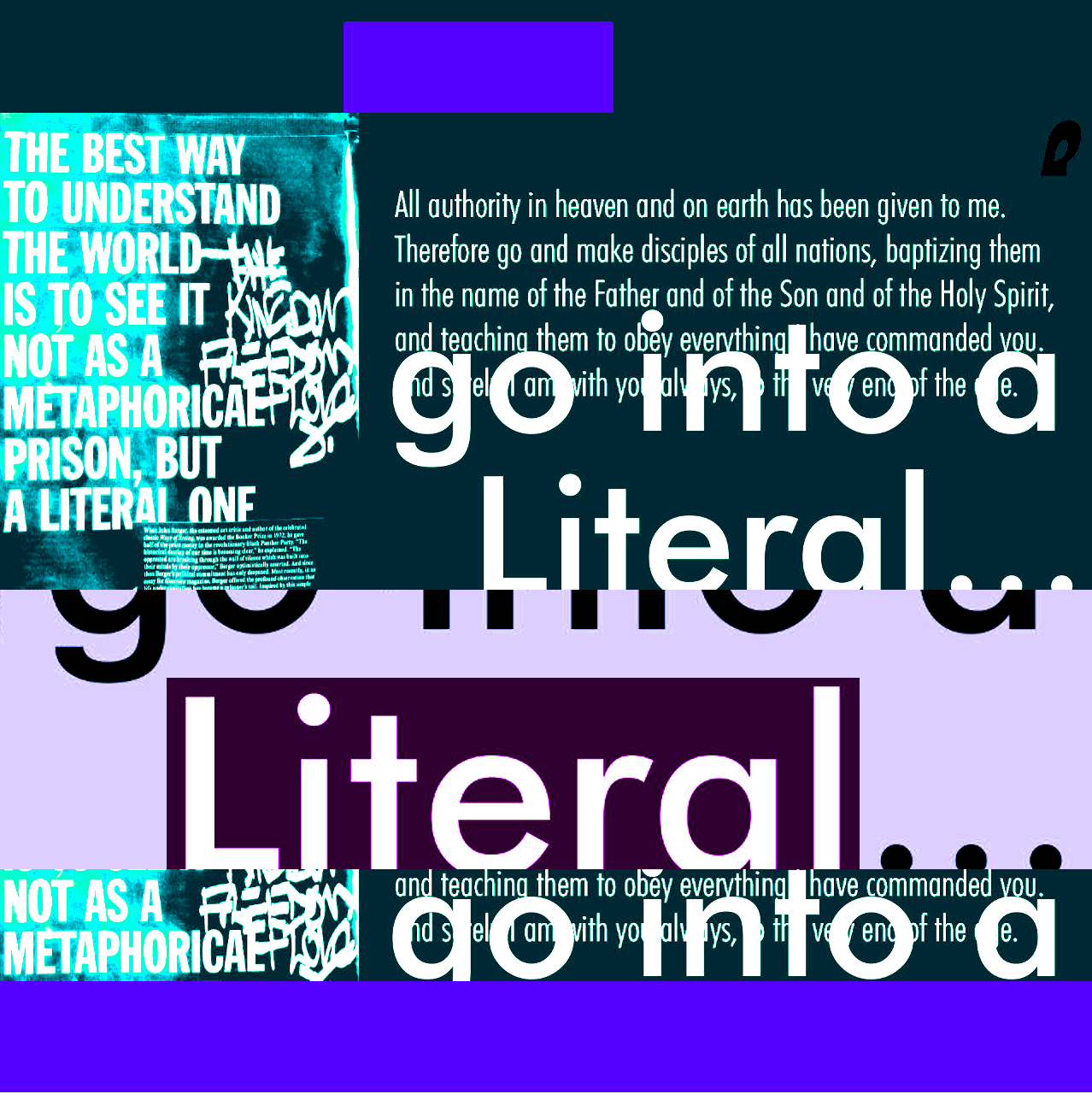 Dismantling the tags, guards and ever-filling cells completely, is more for me/now, than I have faith for.

After all, it's a relatively open one with plenty of association, food and like. Urgency at the walls and equipment to restrain might bubble below the surface but hardly causes obvious publicly present, disconcerting, yelps.

Everyone most I read/watch or chat to outside is on the keep calm and carry on tip. Not knowing, and understandably so, what there really is, to talk about? Online blogs and theologians, pundits and presenters, err towards; may as well be enjoying nowadays for tomorrow is... well, not yet.

Why worry? Agreed but ain't. Just trying to hear, God and is saying...

Few riots and holding up. Once there's trouble though, going to see a lot more'll get more banged-up. And all the indications are, they're steadily proceeding this, with ever-encroaching restrictions and see how this works.

The governors seem to like it this way. Comes down to our voluntary engagement in prescribed rehabilitation. 'Re-eduction Camp' the favoured term. Nation-sized, although wider-regional is where the consultants recommend. There are manuals specifying the global blocks.

Unless, it's all about some kind of perverse pleasure at the process, indications are, they covet our compliance as their 'higher directors' demand. Of course, we're a marvel and fascination to experiment on. Prep. and planning for Humanity 2.0 and their half-billion resources.

Until then: Mass populations are for fixing-up the food, water and digital-based input with sedatives, stimulants -- mostly downers. Sprayed-on. While many as can handed pills. About half the current western-based pop. Taken to make H.A.ppy-er. Stop/start the brain doing things, which truth-be known, isn't measurable but hey, seems to work/so say. Plus, there's warnings on the inserts, so knock yourselves...

Next on Pharma's list, is the injection-based regime. Mandatory. Starting with inclusion in certain job descriptions.

Yup, could go on. But is this a metaphor? The prison talk. Bars on my heart, the key to my inner-life. That is... And yes, we circumstantially and/or psychology, can be proper-imprisoned. No jokey blog-post about it. As for the literal but hidden-ish and get up-front about? We tend to pretend/hope/ignore/rationalise/sufficiently trust our leaders/scream "all-all chaos"/evolutionary/just desserts etc. etc.

Although I'm seemingly pushing the above and being observed by guards with weapons. This clinically, most describes, our -- current and so far -- lot. Peep-most would say; "No, no way. NO way", at least this kinda talk. For all a bit drama'd-up and possibilities, over so-sure and intent. Or for some, the ability of the movers to make bad and do? Answer; They ain't capable even/if, and this happening.

I and we-like, would say been true as, at least as thoroughly able, with the advent of the techno-centuries, for maybe... what.. in a category where there's nothing-like the escapees -- for about 50 years?

Although we can't tell with quite the clarity. What we do know is the prison bosses are revealing their regime. More, openly so. Transparent tyranny.

No alarms though. "We luurve... our dictators". At least enough, not to get up on and be typing or talking protests, on about rightly, what and who?

All I do for -- re-confirm upon re-confirm -- sure, get; God wants this stand-up and face the pharaohs and pharisees. Not at all certain God said, this specific or that to me, and as for all the misplaced moves and directions... Yet, hallelujah, this tip-tappin' is somehow with multiple signs, a leading. Certain not only me-bless serving. Has other domain relevance.

AND like all things God-wise. All and as many as, each and every one, can GO.

But why? Because God obviously considers, we-through Him, can do what's needed to release us from some this generational on-going and increasing captivity.

Eh, though, we all go: (a) No prison, all that is happening is somewhat corrupt, heaps of authority figures, battling the complexity of global politics and resource shortages, trying to make -- for the most part -- the best-ish thing of a difficult job? --OR--

(b) Central bankers and the dreadful few behind, have captured infrastructure and 'governments' for centuries and are master manipulators, in unmistakable zeal and a deluded frenzy of hate and ideological futurism?

Since (b) is the right answer, God is for battle and destroy this metastasising anti-Christ commission. Somehow -- haven't sussed quite how -- the Church that could release-up some multitudes, let's not even number this in thousands, when hundreds would suffice, ok.. twelve, ten, three -- anyone ???

-- to know this and respond accordingly. Thus say thus, does God.

OK there ARE, many know and not (so)trapped. But futurist theology-heads on one side and progressives on the other. Who has faith for -- what?

Who thinks 'faith and pray for' matters? Progressives believe more-(a), so nout to say get ruffled about.

Fair do's, those heard rallying and raging, calls and install resistance but there's so many theological pot-holes and the overall swing is for defeat on earth, win in 'heaven'. Reading the future, not writing it.

The only bickering difference is the interpretation that has some seeing and on, for a new apostolic reformation (dubbed NRA), while others mostly go-for remnants from an apostasy, get whipped away in a twinkling. Before big-troubles. Usually, or half-way through 'the great trib'. Some go through this till, the all-me-too agreed 'comes again'. This lot, at least have understandable why-not-delay, motivations. Yet how about "come quickly" injunctions? Called paradox not a fight-on contradiction.

Sense my heart sink, even typing about. The D-stractions abound and I stare flummoxed and grieved. Yes, there's cross-over into Trutherville-Christians and I'm not here to nag and crit. In-fact, considering some of their underlying theology, amazed they bother.

Would have to go generations back, then interpreted in mission to the lost, until, particularly the two world wars when handfuls and hundreds here/there, re-recognised prayer-shaping-history thinking and action.

Then post-war good-times and went back to individuals evangelised. This has waned post 70's and certainly 80's, of course the previous efforts and primarily Billy Graham in those early post-war years was a mixed coming and goings period.

Better end. Find a something.

GO into a literal world is a word from God.

Only in revelation of a literal and up-and-coming, fast being revealed and implemented, will anyone with open theology; "get up out of ya seat, and come to the front".