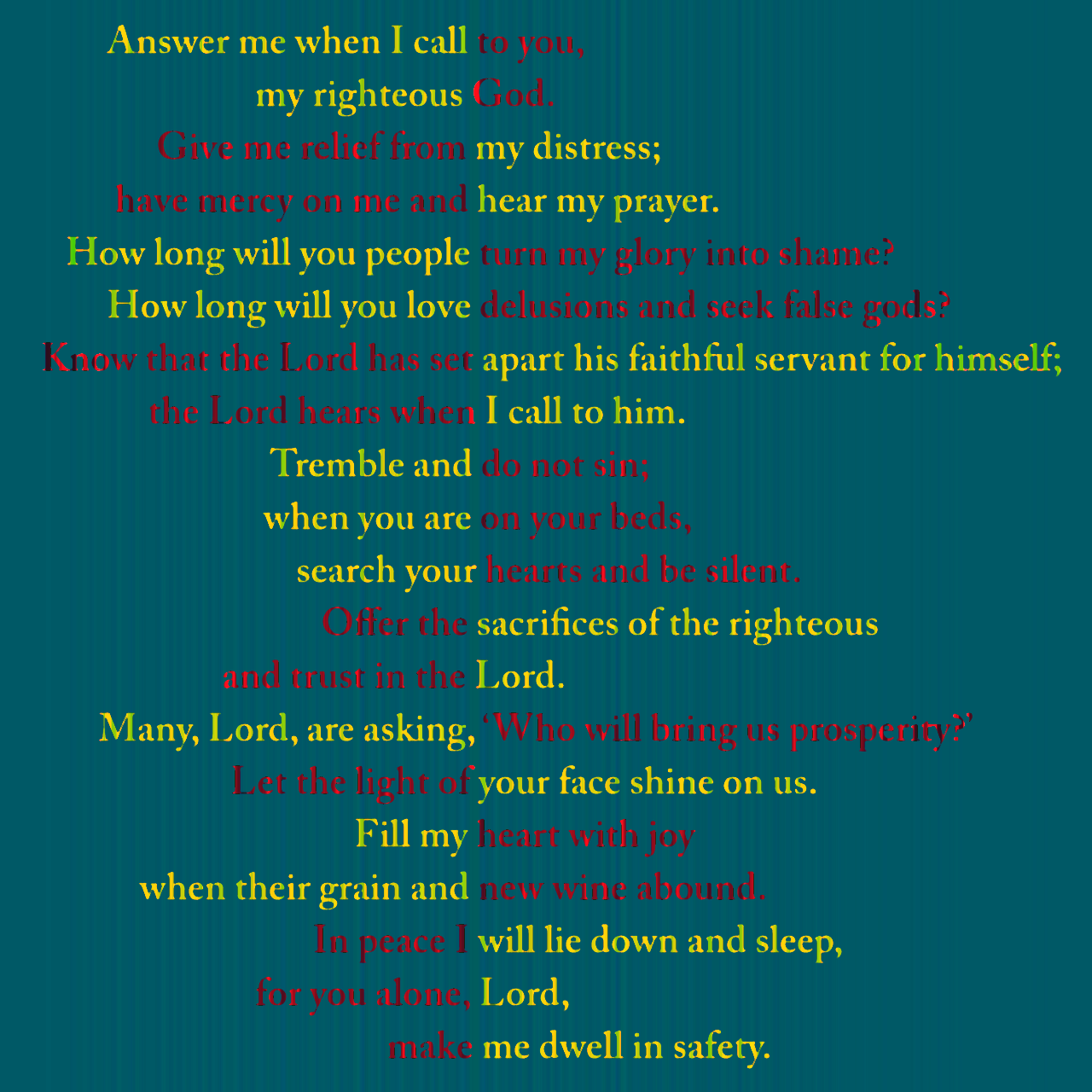 Christianity is escapism and a crutch? Err... yep. In -- like this Psalm says, escaping into God actively and knowingly, resting in and running-on. Thoroughly here and would stumble about otherwise. And do still/sadly/madly/badly/rarely/so badly/thankfully/painfully/regrettably/recently/get behind me and get over. Get it on. Bang God gong and run after, yes escape, IN and to.

Much what these slapping out type and designs are about. Summit to do and feed back. Blessed the opp.

Unto readers? No so. Ye be clicking past, doubtless bemused and bored with this abstract paste about. Once read, twice shy-away. Somewhat-perspective, is the net is full of written-for, those writing, more so than not. Unless revenue is involved, perhaps then. Nothing wrong with it either: Write without care, speaks otherwise, but back at ya.

Although, the alt. info net, is tired. An observable shift. Been and done-ers not replaced by so many up and comers. Plus, net-wide is now more a communication tool, over input. Paper-press readers got online. With ubiquitous for many, or most employees, really want to look on and time-off? Humour or pop gets hits. Games and co. Increasingly the net is for teenage kicks. Hence, never a generation so screwed over.

Tired would be the word.

Bit like Church ("hey that was a jump eh?"). Reckon reason-mostly this: Participation in producing, is a prerequisite, to enduring on with. Jumping again; Seeding or watching a gardening prog. on Terrible-Vision? Studies -- heard -- show, watching T.V. chief-ing, has barely any influence on those viewing, to go cook. Or, increasing the amount of action in the kitchen. Goes along with another "if ya in advertising -- kill yourself" claim; New car ads are aimed at people who purchased another brand (this time/year... and presumably the catch). Regret registering way higher than opportunity and desire.

Some para's on more objections and be done. Till next get time and urge. (Hey... anyone can do this, 'taint diff).

How about blind faith? Eyes opened to plenty good reason and evidently so, this coming through experience, way beyond some intellectual work-out. Perhaps though I should do more and try to explain reasons for claimed-relationship? Whom I say, the one, who is... the One.

Supposed or ought-er, have 'faith' for others to find such. Those I know, more said meet once in a while, are mostly ruggedly strong on no-God. While what others, maintain they're a Christian yet only so far and with a struggling description what/why. Not saying I view them not, or the atheists are so far from. This begging the question of next and after-death, I stand somewhere between hope and concern for peep. Err on hope/ful levels of conditional open to. Not that 'then' is much my now-thinking.

Don't think twice about the Sunday gatherers getting on the train, these v.few among the many and masses who would ne'er go, those whom I see on.... Sundays. Know what I do know: The Church is spectacularly unsuccessful. Not talking no-revival, those occasional times and places where folk flooded into formal church-going Christianity, just the sheer and growing contemporary resilience. The 98%. The distance and irrelevance this 'formal religion' presents. Certainly in the UK, and in those other parts where there's seemingly somewhat more impact, the ways and wherefores of these outfits would likely give me the involuntary willies with their stands and attitudes.

Church is the trouble at mill. The blank spot and if only... Not 'somewhere' we go drumming to pull 'em into. Back yonks was, more so. Hence, those there now, in the main. Suited the social times. See... tis like the net. Once a grower in visitors far and wide, regulars and hungry. Now/what?