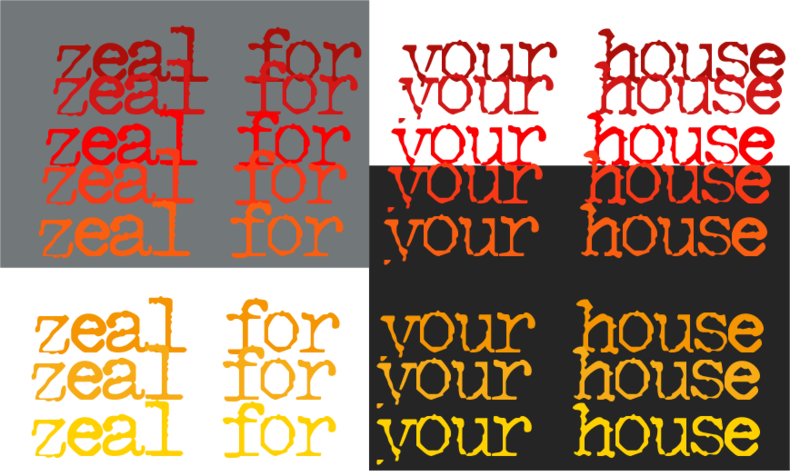 His disciples remembered that it is written: 'Zeal for your house will consume me.'

To be consumed, destroyed, if need be. Because? Commitment towards God, in the face of opposition in even, to the bringing us toward our own destruction, we live more fully who we are. This? Or, such love from God, that what else can we do? Then there's people suffering? Perhaps, reaction against opposition and 'can't stand bullies'. This much. To get-them stopped, cost not the issue.

Because. I'm a Christian. How about, this?

Maybe, about 'what could be'? Can be. And all about the promises, that we can walk through such trouble and terror. That God says you can/will – fear not. Do exploits that exceed what Jesus did on earth in person.

Something was eating Jesus up. Is, eating up even now but no more destruction in God-self to face. Done on the cross, rendered defeated, ground now, for clearing and cleaning up. Kicking out the left-behind forces. Lost but scurrying in their last holes before obliteration.

He made the whip himself. All neat and tidy. Strode into the middle of the trouble-zone and who knows, did what, damage? Openly angry, turning tables and all. Implies, was emotional and hostile. Guttural. Loud and mad-looking. Moved and shaking. Fierce and unrelenting. A prophetic act with unmistakable meaning, “get out” and not asking, but telling. And NOW.

Note how this is the only attitude we're led to emulate in face of this kind of scene. Get: In our blood and bones. Fire, belly – and I, 'won't back down, no I won't back down...'

Of course 'we' seize on these verses and project on to the bankers behind bankers, running their religious-based fraud, in an open conspiracy to destroy 'prayer' and replace with their global slavery and blasphemous sacrifice. To have us worship them/the deceiving spirits driving. It's not projection, it's why Jesus did it. For then and however detailed or what, knowing this culmination of cabals today.

Defy danger and watch, how remarkably far can go. Miraculous. 'Providence' is too looking-back sounding. That which hasn't actually happened. Implying, a miss-over-stood tradition, rather than a discerning – intended – biblical view. But hey, if it keeps y'faith up? Whatever trust-bringing. To the uttermost deep and overwhelming.

Promises are the dynamic. From a drive you 'round the twist misused churchy-cliche. (Used, to pretend disputed theology, isn't). But still: "God says (and said) – I believe on this – therefore… this/that settles it".

Keep God-attention, vs all else. God who gives us paradox. We call for and cry out in need-like nothing left to hold. Fragile, desperate. Yet, in power like the most dead-raising, circumstances shifting, provision erupting – ever seen.

Increase our faith they ask Jesus. And what does he say? Rip up a tree with it. Do what God could.

How crazy ridiculous? Bonkers-talk? Or..?

If you had faith (trust and confidence in God) even [so small] like a grain of mustard seed, you could say to this mulberry tree, Be pulled up by the roots, and be planted in the sea, and it would obey you.

God bringing truther-truth for overturning, manifest and making behind, evil. With no sympathy, not at all, addressing the enemy. To be uprooted and drowned. Done away with.

One other stir-up 'why?' is God has loved, saved and so-we, overwhelmingly grateful. Like this: God got me. God gets me. God that good. So, beyond best adjective, real… this.

God gave me through giving all. I'm following.

Why do people time and time again stand up for what they are? Called to be. This intriguing. As previously pondered and written-up, there's mystery in forebears something imparted, pulsing through. Bloodlines of the beat-the-illuminati. Warriors before, emerging.

Now we have no tribal confusion. Less than justice-for-all motives. We stand, clear and present, before the human borg-likes of hate. They know this, they know they must be destroyed. But they spend all energy, deceiving themselves otherwise.

Logic on a more selfish lines: We're facing mass depopulation by these 'hidden but not' ones. They move with an openness to be stopped. For a relatively small number of able caring, proper-active, truthers.

Or they'll get all of us. Unless, of course, Jesus returns first. And those who'd 'survive' if not yet... would rather not. Be here. That bad the plans.Their perverse-prophecy from hell. A con, fake, trying to be god-like.

Failed and fallen but what damage could be done.

For church to arise, that's got unction and theological-intelligence.

Who know are not called to wait for Jesus to return. Yes, this – if, like the early church, we're doing what cares-not for anything but the pursuit of the Gospel. The Gospel and the on earth empire, that must be sufficiently resisted or there is… no gospel go forth.

Become a Christian y'all, it's all this… no fun eh? Why do? Because real. True. This why.

God bring about your power in prayer, light-up promises and also the lies. Shake-us out all slumber. The little folding of hands and sick complacency. We at war. The enemy undercover but being dragged out to be seen by the very media it hypnotises us with. We need you words of life, wisdom and knowledge. In Jesus name.