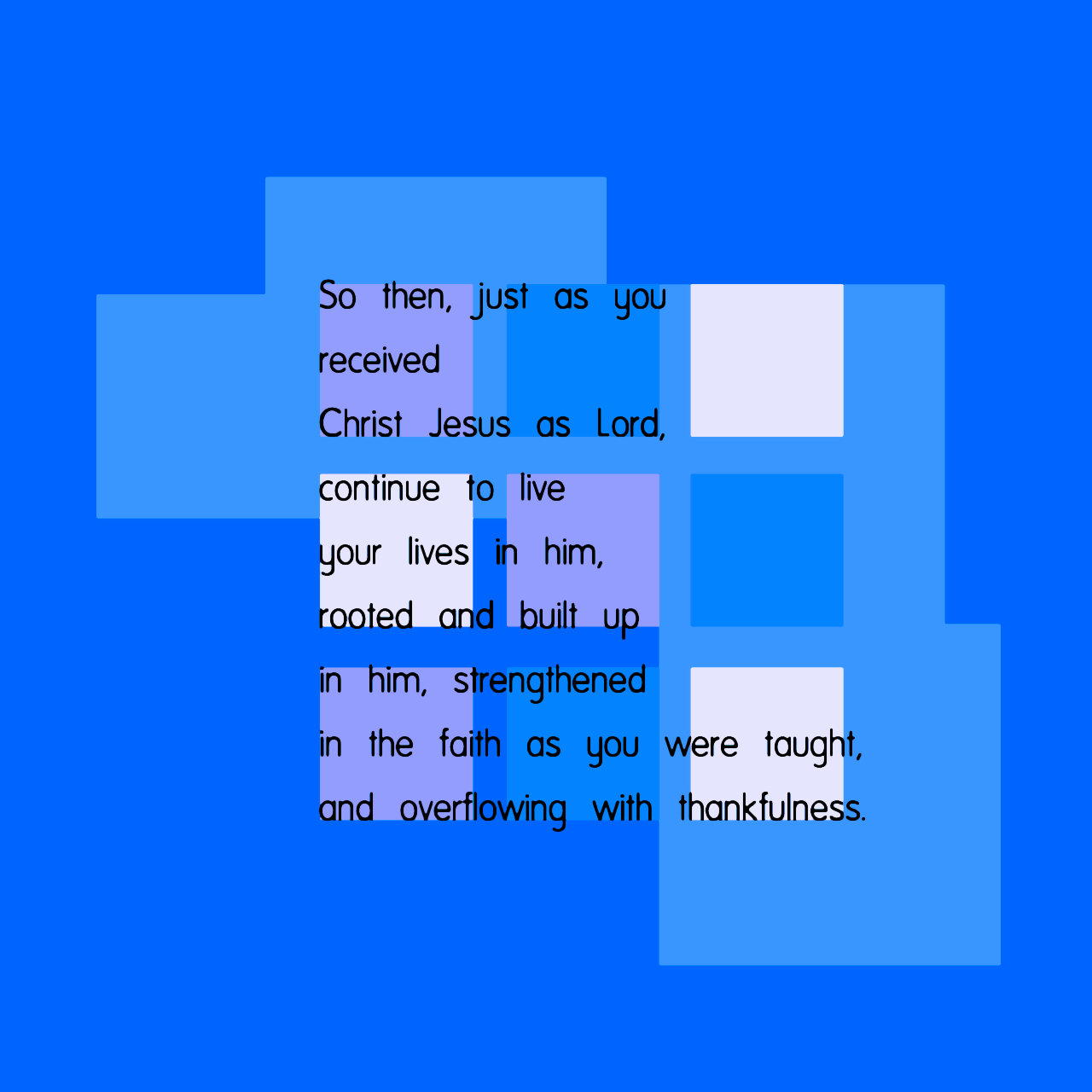 Usual gripe. Nout-o-mondo to write about. Never stopped me...

Abandoned and without a care otherwise. All fresh and fitting. Keen and as yet oblivious, to many of the yet-realised, Evangelical stumbling blocks. Traditional baggage needing a kick-over and freed-up in the Holy Spirit reappraisal. Such-like and about the numero uno that hits hardest; Saggy Sunday shin-digs. Loud and colorful sag or awkwardly sung hymns. Or... anywhere but somewhere put-together for gagging to drag a mate or new acquaintance to.

No pull because not reviewed and re-done but dug into the rut. The way we do is the way we insist. Not making-for 'others' like a show or shop but considerate there's elements; sound and vision, words and song, physical dynamics and cultural artifacts. Stuff we use or are. The clothes, but they change the wearer. Somewhat.

Feedback would help but usually most wouldn't be happy with whatever. Nothing like familiarity, chiseled in granite way-to-go. Hardly any experimentation to do other. Hardly anyway, the motive or means to.

"It's not about the materiel, aesthetics, style... -- but substance". Confirmed correct through previous generations adoption and admiration. Therefore...

-- most evangelicals think they're recovering, or remaining on, hallowed ground. Maybe remembering charismatic renewal back-then or perhaps John Knox, Jonathan.. that? Refer to history and what's seemingly -- and not without some justification -- the lost or losing notes that MUST be maintained.

And in the public milieu? The dominating theological discourse for thirty years; Gay-things. Not so at gays themselves but bish-bash fellow evang's. New-media spats. Well spatting and spat out. And so go, the tide of, and tired-with, deserters.

Death and life "here we stand" merchants, are left to fight over the Anglican ability to chuck-out the opposing ones (part lost/part happened). Oh... and take ownership of the spires and halls, manses and d'money.

All for the moderate, middle, majority to grow tired of liberal grandstanding -or- trad-trad evangelicals crying on and one that the queers are causing Armageddon. Squeezed out their mainstream or declaring all-but heretics and squatting or standing outside the gate in protest. Both insist-on battling gangs, got marginalised. Praise God.

Played out in Anglican waters, who split the splitters, through finally accepting those holding this alternate, is a 'secondary issue': The calling of the few who might dare trod over the entrance mat, to "come and be holy and blessed".

STILL some on women, NOT in leadership;

With the foundation that's a-wobbling is Calvinism, a potential screw-up in lived-out, for all who trod this path. From this classical-error, comes political 'in God's name' exceptionalism. Leading on to 'hell' and eternal, needing some serious re-look at or; God 'becomes' -- not the Jesus, revelation.

Bugs peep to say God loves first and foremost. What's happening is the question of responsibility is wrapped in, assumed, loving One's failure. Poor planning, distant or if present, "nothing to be proud of", character-missing impressions, roll out.

Or, to suggest will explain, think takes, a mental dance routine. "It's complicated...".

Not really. Jettison the unmoved mover Plato-derived, "this is God" -- and look again?

My little dig and reflect on so then just as... is about how static we can become, entrenched so, in a misunderstanding/deception. So goes the Church, paralleling those awake and active in a political-wake-up outpouring.

People made and found their positions in the main. Once bedded in, not likely to move. It's 'plastic bag with doubtful-looking velocity to harm -or- a serious escalation in national security risk levels?'

Future all known -or- future unknowns?

The lines and walls seem relatively effective, church and the state of the State.

On Church and Jesus. There's a bubbling around 2-3% upfront, am up for God in Jesus, in the pop. A threshold remaining resilient, claiming their; "all in and not moving".

The evidence of light on disputes and who likely carries the argument -- as always -- is who is most into civil engagement with differences?

Outcome? Masses of ch.-attend out goings, which has covered, moderate in conspicuous pockets of in-comings.

Will give out one why:

Over confidence in the last free-flow of incoming traffic (circa 1980's) which led to what's dubbed, people/church leader 'empire building'. Retrospectively, it's obvious, if there'd been more let-go and positively release people to independently church-plant or offer support across theological/ Church stream lines to pioneers, we'd likely see a very different ch. landscape.

Somewhat led by the House, or New Church, movement before Charismatic Anglican's got going. The window came open, with some young upstarts having-a-go, in the towns and cities of the UK in the 90's -- two or three years of, until slammed shut. Now the ones, who would or could be tagged 'emergent and progressive' have surrendered local church for fragile, or at least numerically depleted, networks. The net got everyone going global or at least national and their 'fellowship' goes virtual. More downside with the up. More disconnection from these keys I'm on.

This the same song and social truth-talk. And this relates to the blessed instructional reminder. The call and compel to remember as we go on, how being a Christian was, in the beginning? How was it in the courtship and marriage, honeymoon, perhaps early months even..?

This just as was about openness and a teachable-ness. For me, in a then contemporary atmosphere, not so tired and blase a response. In walking up to strangers, exclaiming, "God alive and loving here" -- what do you think?.

Moved quickly from Jesus is the answer to Jesus is the question. And this is the rightful progression. Nowadays, the bends we live on. About the same response to Building 7 to Parsons Green -or- The Cross.

Not moving. Not received. Not told by my peers and TV-etc enough.