Start with confession: I persistently and blatantly undermined the love of God and therefore what it takes to do damage to the enemy. Some truly terrible here and theres. Crucifying Jesus again and again, holding him up to contempt and doing myself harm (a N.T. description). Finally I’ve designed out what keeps these occasional running in circles. Shattered but determined for the front-line.While there's a today.

One of the last five years (awake to the what the battle’s really over) must have meant some thing. I persistently went to pray at the heart of the beast. Some moves cannot fail to get you noticed in hell and incomparabe, all that’s important, ‘known’ by God.

The global collapse is engineered by evil spirits. The Bible makes this clear, as is the mandate to address them head on and remove. The Western church in parts that could matter, seems fully tailored-up with traps. Preoccupied with missions that miss the vulnerability of the world they’re building on. Of deep concern is those who know this, seem resigned or at least muted, going along with our collective demise by default.

Not that I’m suggesting God isn’t working on other goals and makes good of what he can along the way, or have any idea how much cumulative prayer and good-works holds the darkness back some. All we surely can confirm in the Gospels and early church: The Empire’s understood as the enemy and the choice for an alternative is Christ’s reign now, as far as possible brought in on earth. Jumping to “it will never happen fully here before the new earth” was not their approach. Although recognised as the culmination. They fought in a clash, that as far as could, we-must-win and now. Centered on ‘making disciples’ the ‘and all things Jesus taught’, today revealed in the publicly accessible context of our planned destruction. Not God’s way. Obviously.

Much church-talk dubs this as Dominion Theology, a critique. Difference? This is about survival.

A prerequisite for discernment is information carried by a despised or trivia-treated corner of the internet. Where the lights are on. A would be a meeting point. I can only hopefully presume, any in the know and doing (praying) the right ways, have switched off the internet entirely. Having enough better theology to combine with awareness of what trouble we face and the heart of God calling. What God faces? This is the key. It’s not our fight but the defiance of God and his promised coming realm on earth. Challenged by these unseen evils, with powers enough to coherse us to its ways.

These miscreants build up cabals to the top of the heap, sufficiently prominent or likely to be people, who’ve decided to welcome them in. No longer realistic is forgiveness and grace. They chose to believe the lie. At this rare point God sends it some more and still with love on his side that doesn’t compromise the justice of love, they move on in their never-turn-back self-deception.

Soon the enemy had bloodlines, a couple of dozen families in their mission for a new trans-human order. They smug-have, what they think, is secret knowledge from ancient Egypt (thinking sourced even earlier), believing the Christian Gospel is a deception and they’re the future. The better destined few, they dream, with life-extension and Cryonic fantasies.

‘While it is still day, we must do the works of the one who sent me’ said Jesus. This screen we read, these words and any yours, are part of that daytime. Chains exposed, stand as testimony to the mocking of Western masses, with cover stories and belittling lies.

If the evil spirits knew ‘who’ was removing them through prayer, they would begin to flee. Their power is based on permission, an allowance, ground given. It’s not theirs, they’re illigitamate and theives. All we need, is known to have the authority and power. To put everything we can aside and interceed for all the hours a day we can. Then those who know what and resist, not especially Christians, will find their stands empoured and the way clearer to turnaround this global catastrophe we’re heading towards.

After this incident it says those in Ephesus were ‘seized with fear’ and ‘Jesus name held in honour’.

‘I know...’ is a voice speaking through someone in response to those copying Paul and others, who’d seen some deliverance themselves but decided to move on from their normal practice and invoke the Name of Jesus. Without the call and authority of Christ, these spirits go on to drive their host to physically assault them.

In those days the miraculous was more prevalent or perhaps misjudged. What’s claimed is first Christians came in with another level and depth of power. First this happened in Jesus day and now the first generation of followers.

This is what these entities do, inhabit around and about, thereby much of our world. To beat us up or watch us do it ourselves, with whatever prompts at their disposal. I’m not promoting looking over our shoulders. Look God. No matter what we believe, we can see the fruit of our tree. Self-evident, more or less selfish or loving. Only two moves - if not made - bring certain flak. Seek Christ and/or fight the fight - the dare call conspiracy.

Answer: even without a conscious conviction to surrender and follow Christ. The name can - reckon will - work and protect. And Psalm 91’s like a hurricane. 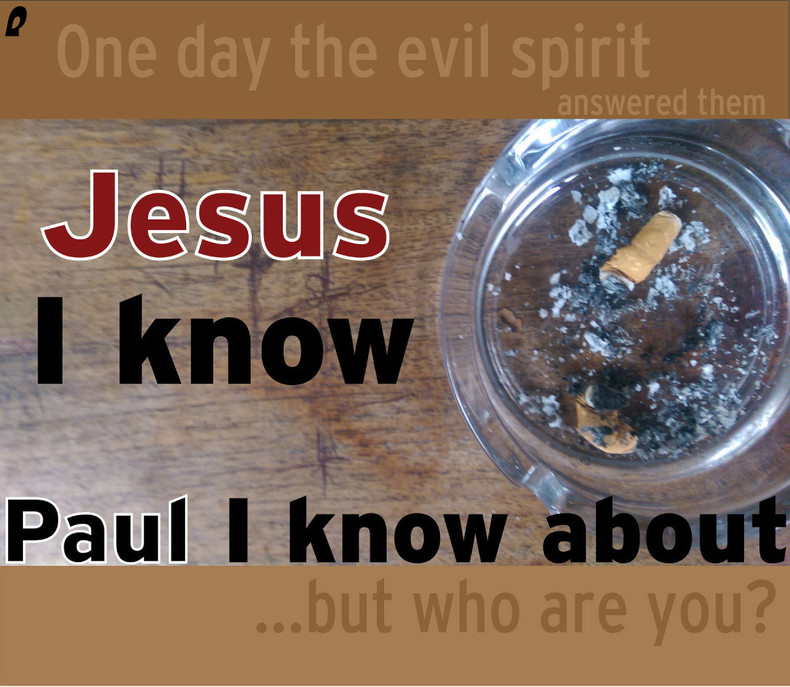