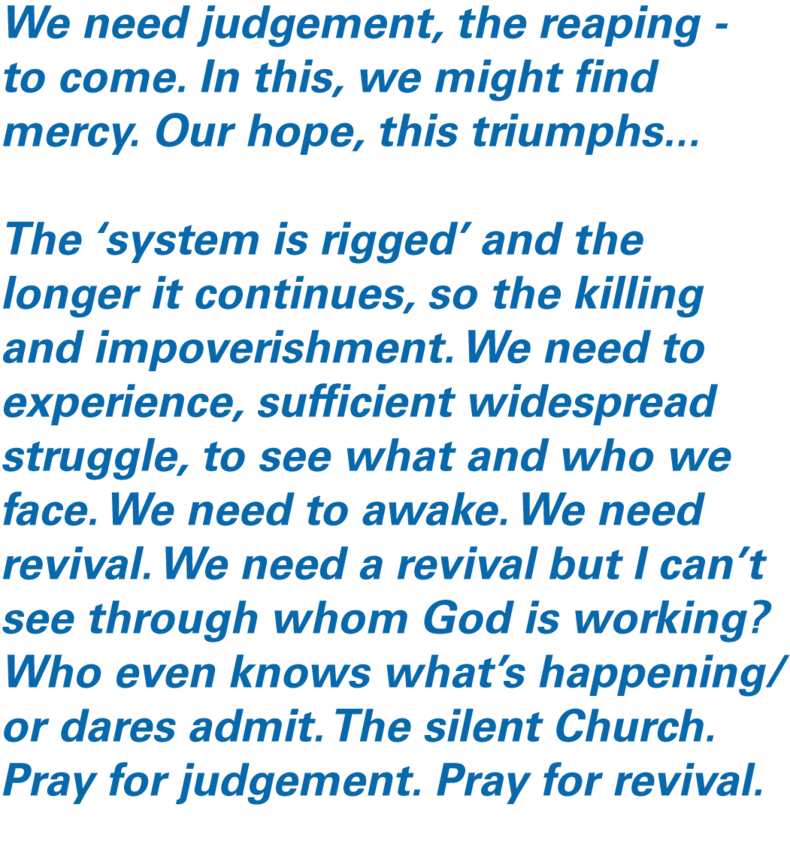 I consider my only role is to pray. Perhaps prophecy.

There are other things to do which people, should and must.

Write out morning devotions before office hours - 'plant a seed'. Endeavour to stay off the net until tea. Will use the daily reading – but here now/today/this.

The internet has devastated collective communication. Ruinous. We once connected by way of phone or met up, now we hide. Once wrote letters…

There's something sinister in whats happened. Now, more than ever, freedoms on the internet are being taken – unless and as long as we resist – from us.

Those not persecuted will know their judgement; 'not a New World Order problem'.

Those 'couldn't care less' all but few.

Levels of awareness have hit a ceiling. Those caring and believing action matters politically? Those awake out of the Left and Right con? Those who face facts? Those knowing our lives, will not be living much of a life at all, if we don't stop the puppeteers of politics and big business.

Continue to write daily-ish. Not for readers who barely exist – stopped looking at stats – but for God.

Acts of spiritual war. The enemy is beatable in Christ, the Gospels make this clear. But where the warriors? Where the women and men? Ones who aren't so 'wholesome and relaxed'?

Is anyone in a state? Getting so disturbed to express disconcerting, off-easy, get up a holla…

Wrote one thing long ago (10/12). Then not much publicly until six months or so ago. In it – will try and find/add/have - wrote of an encounter with someone.

Here is. Comes to mind. Supposed to be upset. Supposed..? This is God's move on us.