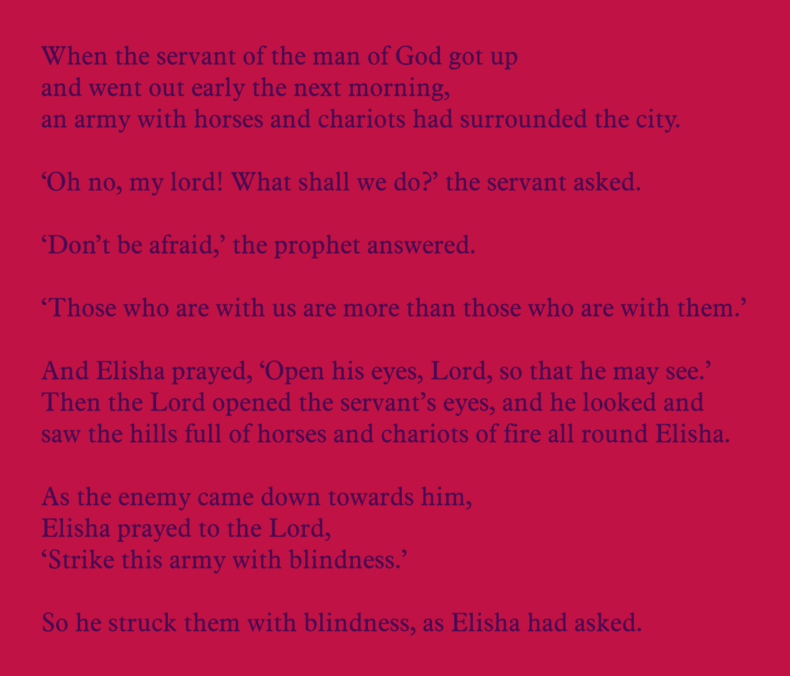 Means with eyes to see and faith exercised.

Not – because there's more with us, therefore, the 'armies' against will somehow not continue to conquer on. The revelation is clear. We need faith to overcome and eyes to see why.

And the necessary to see, takes God – and comes through faith, voiced in Holy power.

Vision, if we ask… and only when we do.

And images and words from the enemy are designed to drain us, of growing or receiving, faith.

Modern media's specific, concerted effort, is to wreck 'faith'. Write-this, because I watched some T.V. drama – and every-time I do, see the psy-ops come rolling forth. Unadulterated political scamming. Crude propaganda, pumping numerous deceptions but, is this fully why 'they bother?'

Somewhat to psyche us along elite-systems talking points, yes, but the lies..? – It's ritual. Sick-dark-arts, for some pay-off magic back for the commissioners behind the 'commissioners'. The Govt. reps briefing – but those, behind the Govt...

Some necessary to produce, something for themselves. These few string-pullers whose intent is unequivocally to steal, kill and destroy humanity – all but enough to germinate their will-fail-fantasy.

Wrapped up with their unseen figures, ramped up – in faith, through these cult broadcasts.

Money and greed-ruling, is a cover. Death and 'other' is the weighty needs they face.

I need to hear God on this but moreover, need mine eyes opened. The Bible is all about telling us that we can be more than conquerors. All about the worst and the most the Global-ist enemy can throw at us… if only, ONLY… we could see, God and hosts. THEN – we'd be the overcomers to shift the onslaught.

(Now-on these writes are going to be quicker and shorter – but must make sure I say 'one' thing).

We need voices to make bold and resistant stands, based on death-defying claims in the face of the armies of hell 'surrounding the city'.

I hear so few, so little, who come close to this. My small-steps toward shame me.

'One speech I happened upon was delivered by the former pilot and aviation expert Field McConnell. Lucky that. This was whistle-blowing in real-time. Rightfully and inspiringly brazen in the good-here against evil-there. Face-up and victorious.'

'Man found/finding, nests of vipers, reaching down lifts the lid. Aghast is the word. Resilient without restraint. He could've done it for Buddha, Children, or the Universe – for me – would be as brave and brilliant but – gave Jesus the nod. More, didn't I ...cry.'

It's in the moment of delivery that 'something is' happening unseen.

And how we need more. A flood. Be they public (and this one recorded), or in seclusion with only the sounds of the birds. Alex Jones leads out on this, with some of the team and guests getting on it. Vocal, evident, violent yet loving expressions, of Holy Spirit endowed faith.

But you have an anointing from the Holy One, and...

1) Know and see the enemy. 2) See the utter destruction they're bringing. 3) Ask for inner-eyes to be opened. 4) And – in this case – blind the enemy. In our case? This and much other led-prayer.

This story isn't some, once/then/specific, not to be universally applied. These are instructions.

So this morns one thing: the verses of the Bible and declarations, are our army-bringer. Enabler.

Combined in moments of time, ignite – in prayer and proclamation into the unseen – to battle-back other domains, that steadily march upon us...