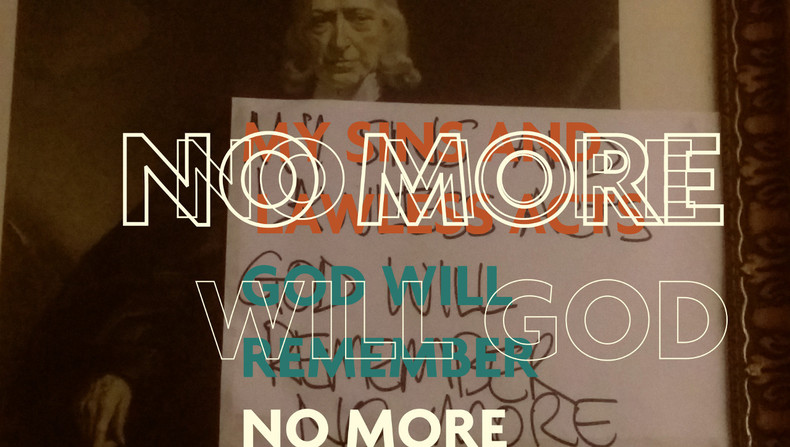 After Peace Offerings - thanks in fellowship with God - come ones for all. How to have God-fellowship, and remain so. The what-stops and how to start. A misfit into marriage. Death tainted, to life transparent.

What we could, should, ought to do and have done? Offer for sin. To get off and get out existence’ dilemma. God ‘wants’ us but cannot have - until we receive, the necessary.

Take the offer. And give one. Which is: Ourselves, on the way to all...

Abhorrent talk. Nout like, ‘we need’ + God, to piss-off a world of triers. Or less this, and yawn in response. And... “some bloke nailed to a tree”? Whole thing an an-ath-em-a. What a wind-up or pretend-means-something? All until...

...God can get through, to switch the lights on.

To sin? First: How little sense this bull-stuff makes to modern-ers like us? Archaic and elaborate acts, for who-knows what and why? Again, I could crib some wisdom about but so could...

I’ll only note the need here to ‘act-out the inside’. Rituals of their day, probably seemed relatively normal, at least in principle. Today - ‘we’ N.T. believers - the Old fulfilled and law done-gone, tend to keep physical-visual acts out, except Communion and Baptism or confined, to cooperate church trads. Established ones. Ones that tend toward, insufficient value in themselves, because they aren’t invested ‘in’ - but habitual and on auto. Sunday mornings...

The problem with church, that would begin a rectify: Change the how-to sing-a-long and sermons. Rituals.

Making-up DIY home-made - or get-together - physical acts, isn’t top of the pops. Add to this, Christians’ need-not, to ‘be all weird’. Part right-on and “if only..” and yet, an idol of normality. I still saith; Do acts of. (I must and will. God...)

I have need to remember: God forgets. However this ‘forgetting’ happens. I believe - because, said...

God forgives that which is forgotten. What isn’t forgiven is remembered. When we die, we’re raised to more-life - again - and God, doing and having done all can do, wants all and many possible to avoid a second-dying. The presence in our state of being cannot remain. Kills us. Again. Not God ‘chooses to’ but put us into... That’s what happens.

God pictures it, that this may as well be, an arbitrary decision. Not God wants - but won’t. No, it’s cannot - and because...

Jesus life and death demonstrates this.

There’s one reliable route, taking the ‘the blood’ - and knowingly so. To embrace this. God. Otherwise, perhaps in the awakening out of physical-death is resurrection, to life-able. But this is left, in the mystery of mercy, Bible-silence.

Most people have no-idea there’s an offer. Not world-wide. Therefore... we’re called, (those who know we have had our sins forgotten), to go into all the world and - if like me - struggle to accept God forgets whilst, conversely and paradoxically, conviction when and wherefore. What sin/Jesus death, means? And proclaim the good news.

Not so much about ‘what happens when we die’ unless, someone’s felt-need - but the reality of God, in the perceived-void. Our uncertainty beyond material-world. Reality in and now.

I shall return to this. Constantly be re-expressing. Try again. To write the road up.

Sacrificing animals put them away, got wrongs forgotten. Now we.... have, Christ’s death and The Holy Spirit present, for all who call on - and receive. In this/know: God

We become and remain unforgiven because want to deny and refuse this gift in a turning to God.