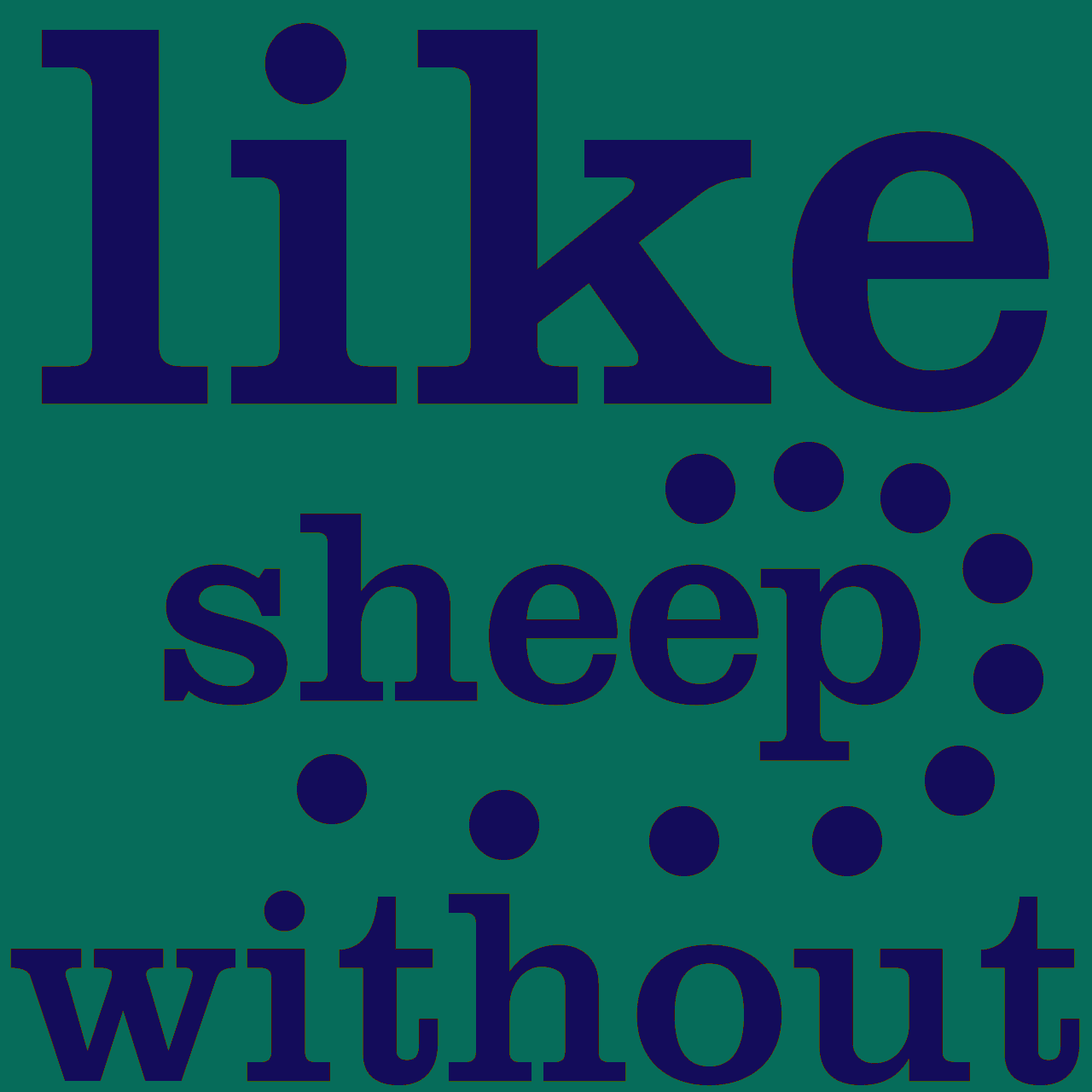 We're not supposed to be well. A disgrace, and sign we're sheeping about while wolves creep in the dark. Showing their teeth and evidence of eating us is everywhere. There are two lines; never been better – never been worse. Not more or less, clearly, both/and. We should be grateful, as in the UK, and not be in an idealistic romance with revolutionary social re-ordering, based on historical and geo-political comparisons. 'Hold on to things that remain' and all that. We don't know how lucky we are and so on. Right/right now, it's easy to agree this with a sensible stranger, mull the freedom to talk like this, dare... talk. But we've been set-up by central robbers. Cyber-sneaks, logging this and all typing, talk and transactions within digital reach. Wolves in...

We need to be disturbed. Utterly floored. Actually, we are mostly, stimulants and fairy-story visions aside. In an oppressed way. Suppressed by conformity to the suppressors. Who know full-well the direction and some degree time-scale of their central planning. Heard someone say yesterday, that if Orwell and like were around today – presumably transported because would they exist in 'these times'? – they'd be standing outside GCHQ raging. Shaking fists and screaming, more-like.

Perhaps one that jostles along with this is Jiddu Krishnamurti and 'it is no measure of health to be well adjusted to a profoundly sick society.'

Dual diagnosis. Drugs and the mind. Yeah, that's it. And who've (CMHT/UK statutory mental health service) now come to ONLY, "work with those accepting prescribed medication". Monitoring this through a desperate – to engage to save his life – friend. Tried, got boxes to demonstrate. Years and yet on (worse) and off them (better-ish).

More signs: New HR regime, "so you'd like be employed here/keep your job, therefore you must have this vaccine."

Where's the positive, GOD, in all this?

We're not in a behold, a cloud as small as a man's hand is coming up from the sea time. Small acorns and all that. See near-as, NO signs of ANYONE up for God – open and awake – who're calling for revival praying or the flood. OK – there are hidden ones, and just about the right noise-makers, if they manage, to jettison the novel dispensational deceptions.

Not expecting anyone reads this (at all) or certainly cares a hoot about the systematic false-flag driven lock-up that's upon us.

Back to hope and faith: the enemy will push too far, too quickly. Unable to help themselves. There'll be a window. A collapse and – arise. Don't need many to go all out. Knees and arms a-waving, songs and war. One person even theorising and talking such, would be a profound rev.

Instead we're all too well adjusted. No measure, no good sign.

Somehow God believes and sees we'll succeed. Predicts and promises. John's Revelation and the Olivet discourse, that wasn't about 'soon come to pass', speaks of an openness to timing and presence for overcoming. Once clock-work Christianity has been exposed as the misreading it is, there's a wide-open expanse and yet symbolic scenarios.

Time to publish this and be done. The Gunpowder Plot eh... was by who? Don't care to know what these demonised sickos are planning. God could reveal. No need to 'get a word' when by-and-large, scam-busting analysis and bothering to read the evidence, demonstrates enough.

Night is well on the way coming, and yet there's morning. Morning, is what's prayed and acting on. God given. God grieving to give.