For the creation was subjected to frustration,
not by its own choice,
but by the will of the one who subjected it,
in hope…

Twenty six weeks until the collapse, so saith Max Keiser, last week. If he’s correct, should we hope this cataclysmic struggle is somehow delayed? Or better sooner than later to avoid worse consequences? And how about hoping at all, what’s this word all about?

Gerald Celente can’t stand hearing it. It’s the misuse that bothers him, the ‘cross-our-fingers-hope-for-the-best’ attitude, those who yearn for a positive conclusion to the growing dread, unprepared to face the challenge through genuine understanding, let alone engaging in solutions.

Pat answer dominate the multitudes, “hope” or “doom”, both without substance. ‘Children’, sometimes smart and cynical, other times resigned and distracted but always nippers, albeit with grown up bodies and manners. I’ve sadly wasted decades in puerile immaturity but now awoken and active I count this as defining a true ‘man’ or ‘woman’. The info war has galvanised me to reorientate my life. For me this equals living in, and with God but God’s there for all who seek the light, and surrender to the truth, whether you know it or not.

I have hope that God will enable us to win: this battle for life, love and liberty against the enemy’s Globalist manifestation. Not for me but for the little ones, the ones we should keep as our arresting vision. I hope there’s a great wake-up so the children we see in our streets will have a life.

This type of ‘hope in God’ must be a mix with hope in society and it could also be said, God isn’t so much ‘big’, God is other, size isn’t comparable. Possibly it’s partly a misreading of ‘sovereignty’, rather than revelations about God’s immense, miraculous, attentive, present, purposeful, mysterious, incredible activity. I’ll come to this.

Earlier I’d also said to him, with utmost respect, (it’s at the close of a large-ish Evangelical Charismatic meeting) that I differed from their, and I presumed his, view on homosexuality (no, I’m not, in case y’wonderin’), suggesting their were many more evangelicals who held a progressive non-traditional view than is commonly portrayed. That comment didn’t raise an eyebrow but perhaps it warmed him up to confidently oppose the info-war talk?

From our different positions we may feel the ‘evidence’ is utterly convincing but we all should accept there may be questions, legitimate arguments, reasons why honest, intelligent people, believe otherwise. Alex Jones is consistently gracious and adept in holding conviction with a reasonable degree of openness. It’s got to be the reason why infowars grows amongst those who differ with Alex on everything from God to gays, yet hold to his mission to expose the mainstream lies and rally for truth.

For me, infowars assessment and amongst other things, accepting evangelicals (re gay people) and questioning man-made climate change, is where I stand with strong conviction but I – have to – accept there’s reason why others don’t get it.

If you question the established norm, people disagreeing often mute their disrespect and shout that you’re extreme, preposterous, marginal and probably a bit mad. Those behind man-mad climate change and/or a conservative theology on homosexuality so often proclaim the supposed lack of controversy, it’s unequivocally and those who dare question are simply heretics of Truth. That ain’t happening, not when theology involves scripture, tradition and reason, and science has legitimate opposing schools of thinking. To argue that Jesus came from the moon or the moon is made of cheese doesn’t cause controversy because there’s no compelling argument. For CO2 not to be the heater, or same sex holy loving not to be in scripture (and conversely in the time of writing), merits a response but those who bang-on like they’re attacking the enemy often expose their insecurity.

Another point in the discussion last night involved me asking did he hold a previously held distinctive that we both shared concerning human responsibility and God’s strategy in human history. He didn’t clearly answer but said that “God worked in seasons and it was useful at the time” but what’s important now was unity amongst as wide a body of believers as is possible, I assume he means evangelicals. He implied that emphasising a view that might trouble another group or believer should be diplomatically diminished in it’s importance.

Back to Hope or ‘Elpis’ (in New Testament Greek) – a favourable and confident expectation, to do with the unseen and the future – God… ‘subjected creation in hope’.

Paul’s letter to the Romans (Chapter 8). God is hopeful that creation is set free from corruption ‘to the liberty of the glory of the children of God’. To something demonstrating how free being a child of God is. Of course if you hold a Calvinist or even some Arminian views, the idea of God ‘hoping’ doesn’t make easy sense. Likewise when it’s written God; thinks, responds, changes, choses, risks, grieves, reconsiders, regrets, celebrates, hopes… feels, is moved, aches… and so on, its traditionally been understood as God saying it’s ‘like this’ to help us understand, but God’s not like this. It’s God talking ‘like’ people. Alternatively it really is: God being God.

Open theism (this alternative view) rightly reads a God who says the future is partly settled and therefore would – seen in the loving ways of Jesus – hope there’s liberty for all creation from all that binds us. This ‘bind’ (interestingly the probable root of the word religion) is anything that isn’t allowing us to be our true selves. God’s hope is God’s work with us – through what Jesus did and the Holy Spirit does – towards ongoing liberty, a manifestation of God not the devil.

God gave unseen (normally to us, maybe not Smith that night) entities similar freedom to ourselves and this contributes to any frustration we individually and collective might cause. God has no sympathy for the these entities that became the devil, it’s not his doing that the world has injustice, murder and hatred, it’s his doing to destroy the destroyer.

God subjected us to a freedom with responsibility and in this God hopes we will pray and follow his leading, to see his world (‘heaven’) invade and overcome the darkness amongst and within us.

God made creation with the possibility we’d fail to live in love for others and that’s less than the best. This is called ‘sin’. This potential, to be subject not masters of these desires and acts requires his direct intervention at best. Otherwise he does all he can but is still dependent on us. Yes, God is confident there will but a final victory ‘on earth as in heaven’, and yes, the future involves this planet, at least for a long long time, as does it involve new bodies. It also involves a lot more people avoiding a second death than is commonly proposed by evangelicals (there’s no everlasting punishment as popularly understood).

There’s no clear answer exactly who and how outside of a living faith in Christ someone can find this saving gift of life there’s only hope and mystery. Hence there’s an urgent and passionate call to seek the triune living God and for those who know, to share this message.

Take ‘hell’ not as a threat but the cries of love from a God who suffers, loves – and longs to see as many, many, many, escape and live forever together.

Let’s be clear, mainline and popular Calvinists say the opposite, John Piper, this year explains his claims to their logical conclusion i.e. God, specifically wills and takes delight in every evil event in human history as well as each person in hell forever, and we’re responsible (sinners) for being preordained to be part of it.

That’s not the God of our Christ and the Testaments New, or Old. (Read the Bible through Jesus which is what it tells us to do).

Calvinists have been the most astounding marathon prayer-ers and evangelists for God but that’s no justification for believing everything they believed. We’ve undeniably moved into the the light in other areas of historical theology and our progression continues.

Augustine (354-430), I believe, overreacted to opposing ideas and started this whole misreading and – with respect and no intended disunity – the idea God is happy all the time is – I say – di-a-bolical and unsustainable theologically. If you get through the wad of Calvinist writing on the web i.e. ‘why Open Theism is – many say (that word again) – heresy’ you can find extensive powerful and persuasive teaching under ‘libertarian free will’ or ‘open theism’.

Alex Jones asked Chris Hedges, “Do you have hope for the future?” He replied, “I think it looks pretty bleak but I don’t think we can use the word hope unless we actually resist every way possible.”

This could mean unless there’s sufficient resistance our hope is in vain or, how can we use the word unless we ‘resist every way possible’?

I identify with the second interpretation, hence this piece of writing and the one next week and the next. I commend this, or other activities, to everyone. As Alex rightly persists in repeating: Do It Yourself. A spectator might valuably support participators but somehow our psychology is built for action alongside understanding, with hope potentially growing through participation.
It’s not only about the value to reader it’s also about our freedom, this precious luxury, to self-express. Of course distribute Infowars material but equally let’s compliment it with our own fresh expressions.

If the world ends tomorrow Martin Luther said he’d “plant a tree”. You might think I’m OK at writing, maybe not, I might reread and see mistakes. Maybe three people will read it or 300. What matters is we/I plant. You can’t write? you can have a go, if literate. What we mean when we say this (I’ve delayed and delayed, I’m talking to me..), is we care more that we may not ‘be any good at it’ but remember, the act of doing it, might build our hope or maybe the one who reads or hears us. The video or audio clip on line, the drawing, the flyer or the sign.
Thank you for reading this. Hope to you. 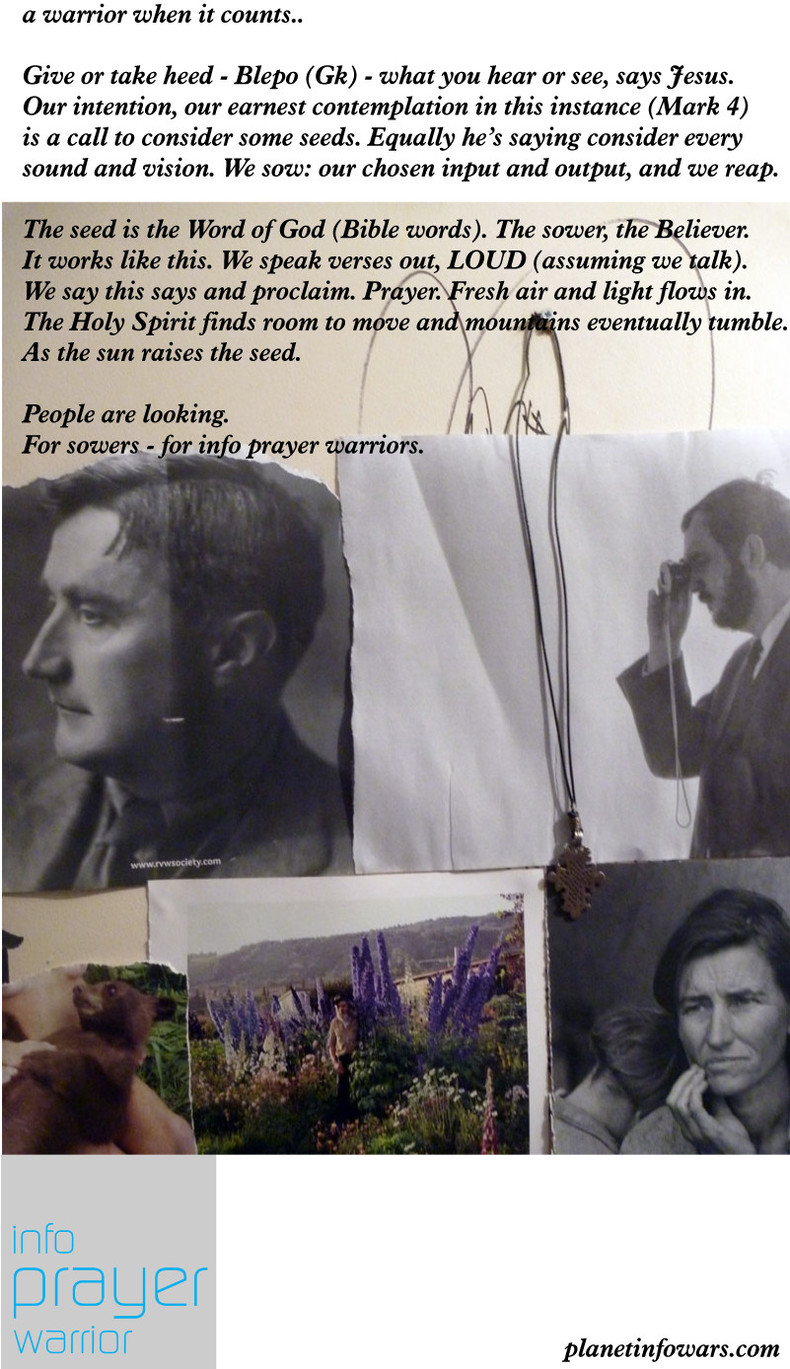