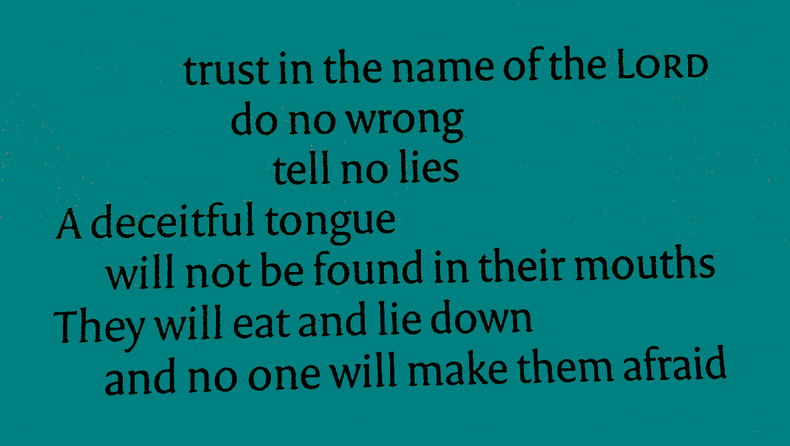 The opposite of faith is doubt or certainty, depending on perspective. I’m considering how it’s... lying?

We live in a web of lies - realise or accept them - more or less? Some, we understandably don’t get, others and we’ll never know enough of the why’s or what’s. Or, there’s unwitting conning. But there’s ones we speak/do. Conscience might not even register. There’s no question some lying, is right. Generally involves facing human authorities when occasion, or let’s say God, requires this.

My abiding thought is; we... I, need to hear God. These posts reflect my limits otherwise. I can’t say I’m hearing God so much, yet, this is the purpose. I ‘write stuff’ on the other site (Truthscoop), here’s for having a bash at prophecy.

There’s one other side: Faith. The farmer sows... That’s why readership is secondary. Would be appreciated and encouragement, especially if anyone did, something similar.

I think I should swap the bio around on the two sites and add the above to this one.

This me, trying to juggle-up; praying, the word and this output. This - being seeds in faith, that if heard right, reap. Money makes the world go around? No - it’s faith and the word. Behind and beyond ‘currency’.

God trying to speak to me, and not hearing, costs. It’s not magic’d away in some relativist irrelevance. The death Jesus did, was to soak up all and every loss, cost and pain - now and then. In that sense, yes. But it still costs us here, if no other, than the downright terrible inflicted on people and creation generally. God suffering now, because. Sometimes or in some ways, God expresses as to Zephaniah, (words above), a deep quandary that brings anguish. Should God have bothered at all? Should he, at the beginning, when seeing all evil doing/all the time - stopped the clock, on this globe or wider? Promised otherwise, made this value judgement to ‘go on’. Hence, couple or so of different expressions later and ‘must destroy all’. Consideration to break the original commitment.

Then Jesus came. Now God moves through... our ‘faith and works’. (Nb. it supposed to be that way, round). The Parable of the Persistent Widow isn’t describing how prayer works but persistence and faith - in prayer. Here and where God is described in what could be read as a ‘reluctant to give judge’ - the overwhelmingly, filled out revelation, says the opposite - to extremes. This parable asks, will God find faith? We might crude that up, by comparing and say; if money makes the... will we find money? Money can make and change. Prayer can... God’s not a slot-machine though, and prayer isn’t some cosmic game. Yet, whatever we don’t, or will never understand, the bible-says: We do or don’t and therefore, we sow, or starve (others/ourselves).

Enough. I’m angry at myself for not doing anything like the hearing and sowing I should. And for a/specific lie/ing/current - although it blessed someone and hurt no one. But the dynamics, God-willing, I’m increasingly getting into, God needs me free-of. Blessed with some monk-ish time, grabbing everyday like as a holy-day. I realise two other things that I’m not going to spend time expanding/so much/self-evident:

...the worries of this life, the deceitfulness of wealth and the desires for other things come in... WDD eh? Yet the promise - above - states. No lies = eat/lie down/not afraid. And 2: Colleagues and neighbours are prompted by the smallest dark cloud, atmosphere, mood - to hate those who name Christ. And correspondingly, action for outcome. They might be like that with others but the more they hate what they call the ‘illusion of Jesus’, the more subconsciously driven. Where ‘human nature’ ends demonic/devils... (whatever called), begins. Analogy or closer to reality; whispering entities and all that.

What it is Zeph gets? Third verse. Idols (that) cause the wicked to stumble. Idol/cause? The NWO/systems of this world broadcasting directly to fulfill this verse. Whatever else proclaimed - take main aim, and - persecute, church.

Answer: Sow. (And watch out for the lies/lying - out of, ain’t it always, fear).

Here’s a paraphrase/’The Message’. Not what I’d pray out and through with but the instructions are rephrased and read well:

The farmer plants the Word. Some people are like the seed that falls on the hardened soil of the road. No sooner do they hear the Word than Satan snatches away what has been planted in them.

And some are like the seed that lands in the gravel. When they first hear the Word, they respond with great enthusiasm. But there is such shallow soil of character that when the emotions wear off and some difficulty arrives, there is nothing to show for it.

But the seed planted in the good earth represents those who hear the Word, embrace it, and produce a harvest beyond their wildest dreams.