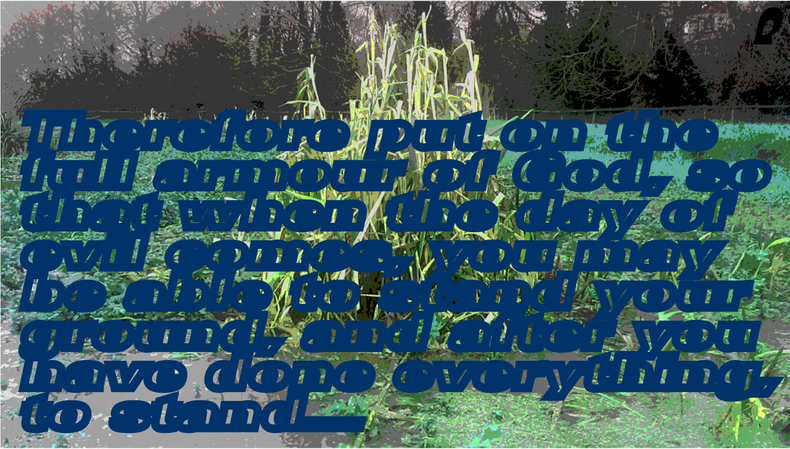 Interpreting the signs, the ones that come out of what happens around us, is difficult terrain. Could it be: God speaking and doing; enemy and opposition or; it ‘just is’ - a natural, rationale explainable occurrence without unseen significance, or at least involvement?

God cannot - or let’s say doesn’t - override people’s capacity to chose. Not until there’s not fibre of repentance, maybe then. Maybes and mysteries.

God might speak through something that happens that’s poignant or unexpected? We reap what we sow, God when involved, causing the growth. When we sow the word. When we feel, compassion, subjugate ourselves, in the word. Sometimes though circumstances and observation, we can read a sign. Question is: When, what and why - does God get busy? Is God? Communicating, so profoundly and prolifically? When does he want ‘us’ to speak? Here’s me tip-in-tap-in and trying to pray the morning in. Perhaps God has no desire, need or intention to say... any-thing? It’s, “jus’ my imagination... runnin’...”.

All I’m trying to do here is hear God. Know God. Know what God is thinking, feeling... what have you.

Stop to pray a bit/without distraction. I half try-not to consider you/who might read this. I ought to, and have to, as far as... and more, more - please God - ‘be dead already’. Be a sign. That a reprobate, (disproving Calvin - since I use that word), with some blessed days, is where I am in the ‘King/realm-dom’. I’m sorry to say, it doesn’t bade well, on the rest of the church.

I know I have a word today. Confirmed through ‘signs following’. Too unmistakable to count. It’s not something the isn’t underlying my things and messages. Obvious as I will build my church and... with expressions in volumes of writers.

Hesitance in a bias for cautions balance and question/question should cease, regarding certain, specific insight. In many ways though, to sketch it out. Writ plain as...

The place the church inhabits in the world and the battle.

Chose, we wrestle not... (should have used that version - not ol’pantsy at times NIV - nb. try NKJ or something, do a re-mix tonight). Because, ye verse - not/making/a\big/thing - I happen’d to notice, ‘Bible Gateway’ do a/this was/ ‘Verse of the Day’. Struggling which/what, when I went on, to cut and paste for the graf . Therefore thought...

Always reminds me of LR. Ravenhill. How unpopular today. All too ‘legalistic’ and associated with dodgier doing, in their swanky yankee sanctuaries. I get it. But I won’t accept. Neither, put-me-off others in the name of earnest, or deflected by despair, at so few Leonards today. And those that ‘are’ ...oh la la... need a right theo-shake-up. Or, hyper-hyper grace says no-no-no, but, we can do/live in love thus, should do. Yet... And This:

‘The only power that God yields to is that of prayer. We will write about prayer-power, but not fight while in prayer. A title, undeniably true of the Church today, would be “We Wrestle Not!” We will display our gifts, natural or spiritual; we will air our views, political or spiritual; we will preach a sermon or write a book to correct a brother in doctrine. But who will storm hell’s stronghold? Who will say the devil nay? Who will deny himself good food or good company or good rest that hell may gaze upon him wrestling, embarrassing demons, liberating captives, depopulating hell, and leaving, in answer to his travail, a stream of blood-washed souls?’