When there's disproportionately more truth and intentions for peace on one side and lies and ongoing warring on the other, we can reasonably assess and know, where God is standing. Of course minuscule in the complexity God knows, he asks that his will might be discerned. And prayed through.

‘Why do the nations rage and the people plot in vain?’ God ‘laughs’ at this but also weeps. The people and land of Syria have emerged as the critical threshold in middle-east, and for all intent purposes, world politics. In many respects its been coming over a generation. Now at the brink of a potentially decisive offensive against a nation with ever diminishing sufficient cause are forces intent to take - us all - over, or face reprieve, or even retreat? The ‘terrorist’ target a thinly veiled con, an intricate false-flag to break up this long historical masterpiece of life and culture. The hawks regional strategy belies a deeper motive: The destruction of such history that displays humanity at its best. This is what’s really behind the desire to destroy. If this can be done away with it addresses an even deeper goal: The significant destruction of God's image and promised plans.

Christians jumping on Isaiah 17 (“proof” they say, that Damascus will fall), with respect, make no - without blinkers - sense. This particular ancient poetic text was never intended to convey outcomes millennia ahead and should be understood in the context it plainly-read speaks. The fulfillment doesn't have to have happened or will. That's partly why God speaks. The view otherwise comes out the easily discredited hyper-futurist mayhem of the last handful of decades. This competitively recent departure, branching out from born-again Calvinism, fueled in response to the understandable panic of our times. A quick-fix to assert supposed biblical validity.

First the weight of issue page upon biblical page, is about overriding justice in the face of Babylon or whatever super-power is trying to be the NWO. Secondly, who says those who read the Bible but are against God, weren't instrumental in this later-day teaching. It certainly inspired Zionism, US exceptionalism and can effectively neuter praying Christians.

Quandary? Fight in prayer with God, conduct any other forms of resistance and protest to rescue this besieged land - or - let the inevitable come and sit back speculating in some feeble comfort this builds confidence in the book?

Any legitimate prophetic reading of the Bible into specifics of the situation at hand could find countless broader appeals. Never sadly the case, once the Bible becomes a road-map instead of a compass and lights off, saints in a cinema of fate.

If God wanted us to know ‘this’ is your God, it would have been clearly written so and not conversely, the plain and common-sense narrative, for all to read. Reformation spectacles make this a deep wrench to repent from or have much interest to seriously engage in the ‘why’ alternatives.

At least keep the 'Damascus going to be destroyed Isaiah-says’ teaching down. Try telling this to Christians who live there? Or maybe the promoters of this claim should amp it up, bring it out, shock more seekers into wondering what kind of Christ is this? Damascus, like any other relatively independent city in threat of relative destruction, is for burdensome prayer right now. The UK Govern(as-if-they-do)ment, assembling for destruction, brings ever-more grieving and anger.

Therefore, Biblefore: There’s much God says happens because. There’s other that is said but doesn’t happen and much is open - depends?

I find it difficult in my heart to realise all that could be achieved by God. Promises clearly offer remarkable possibilities. The acute needs today are without precedent on a global scale, as the population has grown. If/we/do/might/see... all that. Faith and fasting, prayer and persistence, is genuinely shown as decisive - or not? Not? Bible promotes a fake read. If is? We see the instinctive freedoms and random elements of life portrayed in the actions and interactions in the Book. To repeat.

And therefore, a big, why pray?

The ‘suddenly’ release from prison is bunkum and fiction, or just-the-way-it-went, or how it reads; active, alive and real. For ‘everything is going to be’ theology ‘suddenly’ never really happens. Neither can the entities-angelic described, ‘as soon as you (Daniel) began to pray, a word went out, which I have come to tell you...’ In the next vision, more ‘suddenlies’.

And in prayer, it might be. Or faith, will be. It maybe all night getting there though but if we stand enough and strong in our weakness, ‘joy cometh in the morning’. 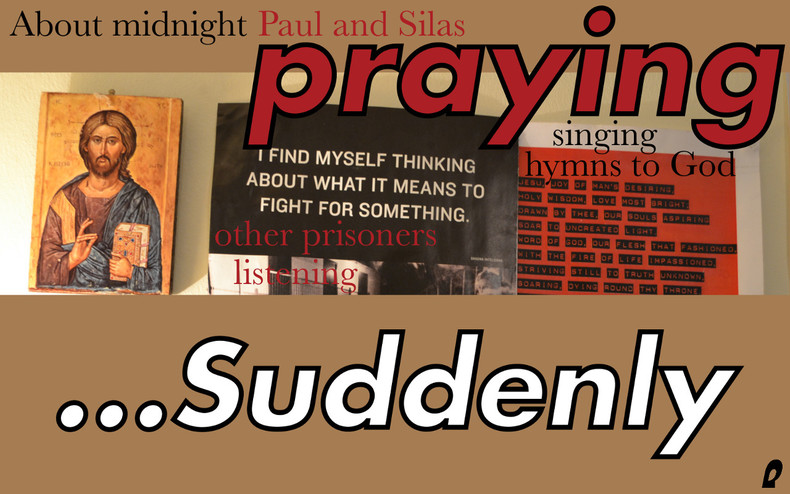