System Of A Down - Toxicity 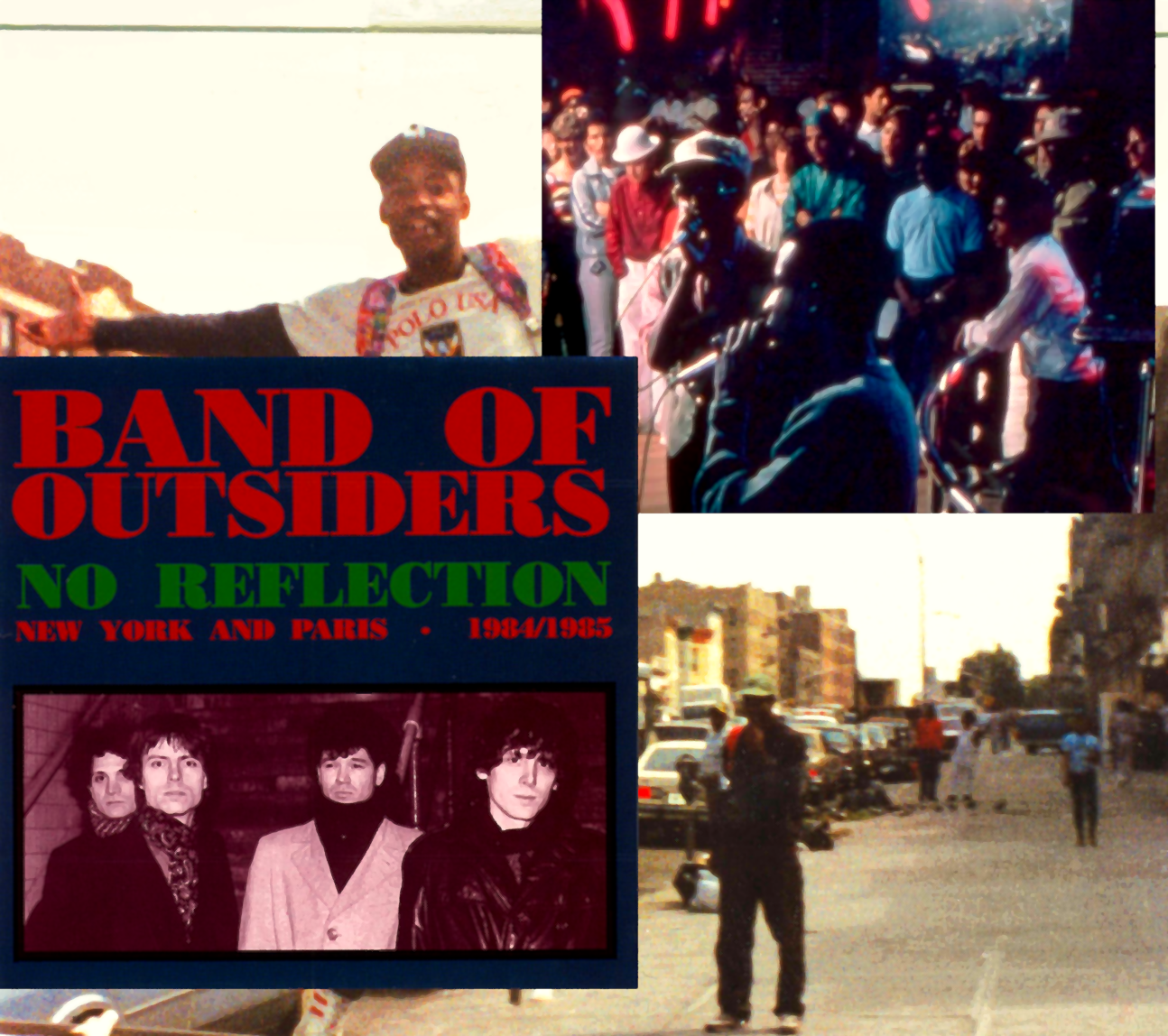 Mark (right), one of Colin's friends from NYC, who came to visit Aylesbury in 1980.

Operator, get my baby on the line

'Cause just the other night

We had a horrible fight

I admit that I, I was out of control

But I still love my man

With my body and soul

When the road gets rough

You say thangs you should not say

I never meant to treat my baby that way

Oh, believe me I do

Because I know I was wrong

And so I'll sing you this song

And I'm tryna get through

Question: What are 16,000 people on a three and a half Billion UK, Tax/Debt, budget, doing?

Opening song of my first of two-goes, DJ'ing. 'My life as a DJ', an hour on each occasion.

It was a young restaurant owner I worked for as a 'busboy', marched me into the Fun House. Walked straight through and into the booth, introduced me to 'Jellybean'.

Blag anywhere. Members -Only 'Garage' is another ball park. (Lots of that, eh).

Same sets. All the records I owned apart from a Jazz album or two, Last Poets and Gil-Scot Heron. Such the not hip hip-hop. Charlie (Grappone) from Vinyl Mania, when he saw me, we'd chat. More than once, he'd 'give me' 12" vinyl and, Hip-Hop.

Not being funny, I was the one straight-and-white, who jumped on him, moment we met. Eyes 'hip', were looking elsewhere. Bought Minnie Ripperton, 'Loving You' from Vinyl Mania. Charlie would throw in a freebie or two.

'Garage and Fun House' was the 'faggy' scene. All friends-about, included; a chummy rub up against you if it got raucous and hot.

At the Fun House and Garage it was often ‘quiet’. Noisy Larry, reading back, could be a touch intense. Plain horrible at times. One big, on acid (only a handful in four years) about 8am. Fifty swinging on. Closed about 10 or 11.

Declined one sweet invite for cocaine and breakfast, i.e., “me”.

The nostalgic 'Studio 54' by 1981 was 'lost'. Visits and name on door? Through a new friends/friend and 'the lighting bloke'. 8th'St playhouse, was a close friend and the projectionist. 'Eng.,' and "Bonaparte Records", and... all doors free/guest-list to clubs and cinemas. 'On the door' and free entry, to many/most gigs. Mark at Mudd Club was friends of friends, now mine. Admission; Vodka and lemonade and a nod or chat with the DJ (Mark).

Found a not-reflective of '81 to '83 article. Didn't 'limp on' but local, and an eclectic mix. Mark 'had it down' like me and the heat was 'roots and reggae, or dance music radio.' He slipped some requests and like in, but it was European and UK Punk over-hang the menu of the day.

Tim Lawrence steps up and provides the info.

Reckon to be the definitive historian and '80-85 New York Clubs, and scene/s. Be snookered, with out reading his book on said-times. Re-read and review?, is on my 'promised list'.

NY came through literature and music, Kerouac and desire to hitch-hike, east to west. In '82 took two weeks, rough slept and made it across through lifts. Worked Summer '82 in San Fransisco.

Songs encountered on the 'hitch'. From Porgy by Nina S. to 'Born to Run', to crying out and singing in the back of a pick-up. No one knows, where I am. This mattered:

Through Kris (Needs), Colin (Keinch) and CBS Records. Met Larry at Dingwalls. Met one or two, "best friends", once hit the 'apple.

Who Colin met, when he went there, 'four or so dollars a quid' days. The time his friends took him for a cab ride and stopped off to pick up "Joey".

Colin campaigned back home. Paid off.

Colin is the picture of all our, and my, "them-days".

Sad, many went too-long, "Thank God/over the bottle" m'self, and yet... for art and culture?

Negril, "DJ-ing". Been uptown with Mark (Band of Outsiders, singer/guitarist). Black and Whites, Keaton one, I think. Met a posh gal, she came downtown with us. Rich, married and it's "New York". From mine alone, lugging boxes of vinyl. Raided Steve and Mark's racks. "Like the radio, but old?", Steve did his best.

To get some breathing space and ask; "Er, what, do the switches, do?"

Once seen a poster for it at the Hairdressers on Berwick Street. Shop to the the left as you through the Alley. (Soho, UK). Hair wash and chatty, arts and culture. The ceiling was a collage of 50s, Hip-Hop, Glam,...

See; Truthscoop.net/sj-and-prison for the first snap: 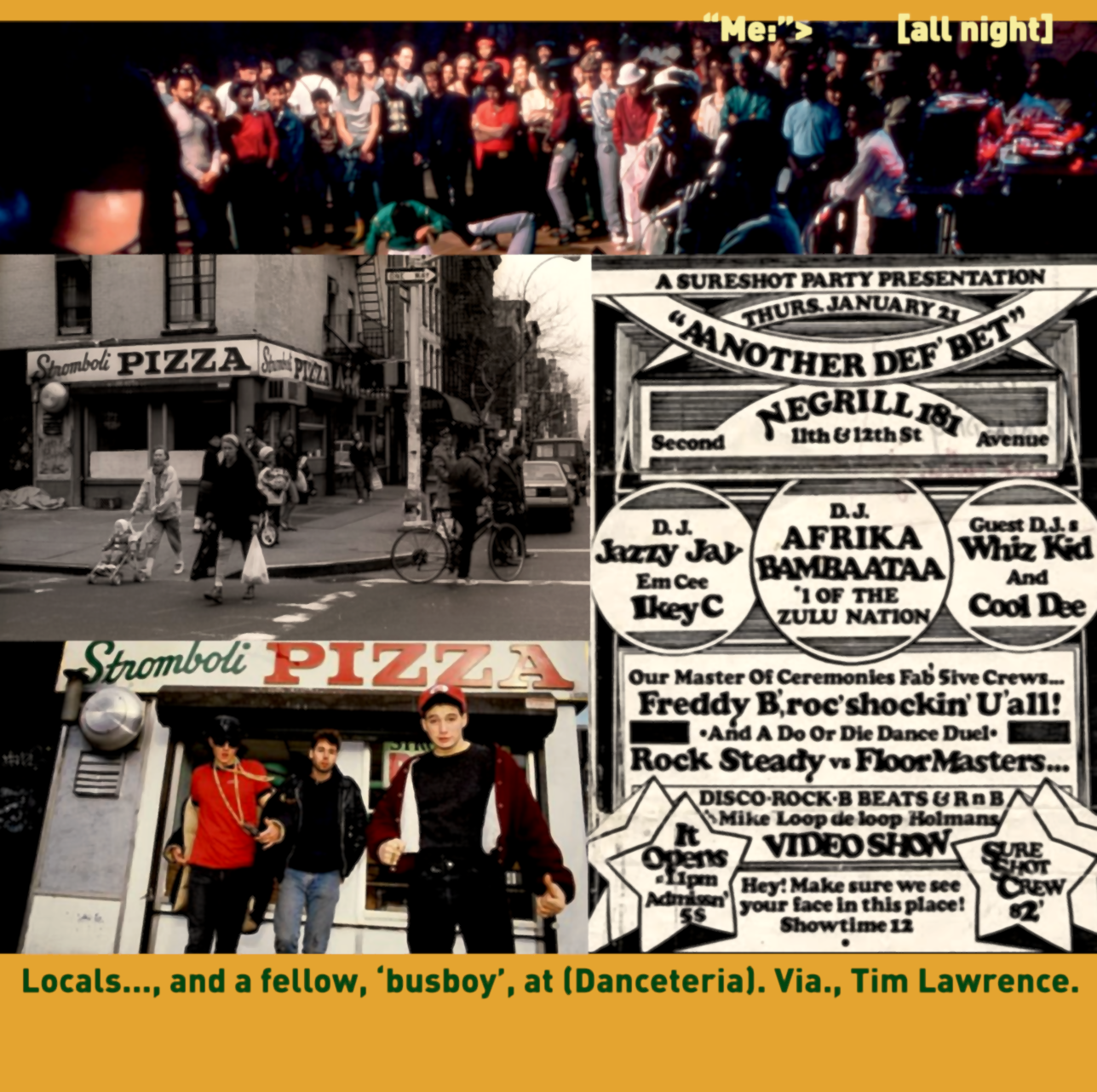 'Blue' or gal/pal/co-promotor, must have thought; "Oh ask that boy from UK, who came in over the summer with the tall thin dread. He likes 'roots' and dance music off the radio. Worked at 'Bonaparte'". Would I open the night 10pm, early-bird set?, aka. "before...".

Found a piece by Mark Colemen, who writes; Club Negril was a dive reggae bar in New York City’s East Village, located on the corner of Second Ave and 12th Street. The occasion was my first look at hip-hop: Grand Wizard Theodore and the Fantastic Romantic MCs promised to “rock the house.” South Bronx meets the East Village.

If I’d learned anything about New York by that point, I knew not to arrive early for a nightclub performance.

[Oh miss-read. Blew that quote/point. The 'anything learned' is never turn up at the start, "says 11?"Meant amble in midnight, for 1am. Think it was closer two, and the "show" spins off. Watched Lydon/Rotten, stand alone at the fire exit while there. Long light-coat, still like a statue. All 'too much', to approach. Girls who ran it, stood by the door, as I go and nervous, at the 'gaps' between songs. Apologising..., they exclaimed, it was a 'most..., unusual, set', or something-like. 'That's eclectic for you'. Relieved could get off and onto 'BLS or Kiss. Debated staying, remember that, in the end perched in the once and me-used DJ booth and stared away at the interesting vibe.]

Tough dread, dozen records on the wall behind him.

Other 'rock steady', and steady trade of one product; "$5 draw" of Jamaican "grass". From about mid-day until the evening.

The lone lovers of Roots and Culture. Once a fortnight or month at Negril.

Favourite eating spot and Pizza. It was conversation and your personal Pizza 'charts'. All-night, south east A7. At 45c. a slice, overall winner. So, NY 81-84? Streets and fourteenth to Bowery, 3rd to A.

St. Marks Place corner of 1st Avenue. 65c a slice, mid-range price wise. "Stromboli", with the windows down at night. Stand and, 'gander'.

Watching the B.B.'s. Be honest, I couldn't name one of their songs. Better,...

Seen a clip of Madonna's first gig, which at, but..., busboy or 'on a 'fire-exit', directing poeople with a torch. Unpaid, "goof around". If not, moved to Peppermint Lounge, by then? And, 'After Hours' (opened 4am and busboy). The second half of on career as a selector. 'Playlists', now, o' 'course.

Final, one last set and, "Me-DJ". Had as long as I liked. Only played an hour from 4.30am. Blab on two meets and drinks. Two different nights.

Noticed the busboy and moved on for a chat. Spent at least an hour with. Hence drink. Bernard Edwards and Frank Zappa. Didn't at first recognise, Frank; Bernard, at all. Quiet, but queues at bar. On a raised mid-floor platform, Scooting about and doings, well, not-a-lot. Mini black-bin on a stick. "Looking ,..." like am there, and/or 'working'.

Bill explains. (My "boss", 'Italian' ("yup"), young 'professional'. Never bothered me. Had me in paint the floor for overtime. Invite to the family flat, downtown first avenue, for suaré for 'eggnog' at Christmas . Nice, M.):

Note? Because, whatever else said about them. First-hand; Both, generous, interested-in-me, extra-ordinary Gentleman. People's People.

Rewind, although the original 'master':