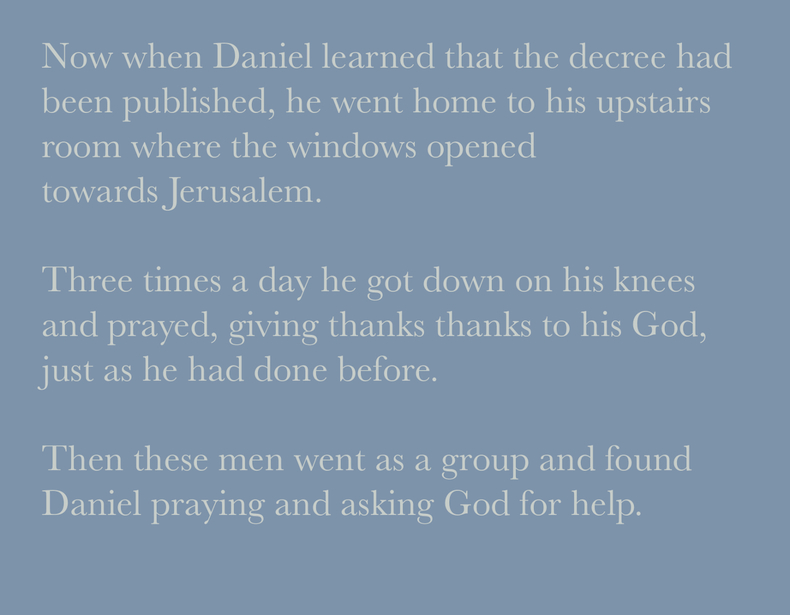 Now when Daniel learned that the decree had been published...

The appearance authorities of representation but from one man, one order. Executive power. Executive orders. Behind; invisible powers. Towards this, comes the removal of legislative responsibility, as the US is currently - further - experiencing, handing over the authorisation for war. Seemingly to one man. This isn’t even true. It’s govt. of the shadows. The hidden wanting the public to ‘know’ they're - seemingly/in reality - in charge. All the while a backdrop of forces that have one threat to defeat and a single defining aim.

The royal ministers, prefects, satraps, advisors and governors have all agreed that the king should issue an edict and enforce the decree that anyone who prays...

Where’s the war going on? War? Where? Of course, the best camouflage is to portray this battling unseen as purely old time myths and mysteries. Hyped up imaginary. Sci-fi. Ancient dreaming.

Babylonians to Persians, onto the same behind the scenes forces today, know exactly what they must stop: The weapons, God promises, will defeat them. Christ dying, blood and power. In Daniel-like minds, hearts and mouths.

To shut their lion-mouths. To so totally defy those in human powers, that where possible even they will see battling on is useless and therefore must let the people go. To have demonstrated their ‘masters’ promises are vain lies.

And what a weapon we see here. As well as relational to love God ways.

Thanks in faith is freedom and what's needed for - or perhaps better said, evidence of - overcoming, on earth... - God coming.

And when the men came, Daniel, asking for help. This is.... all, we need. Most and all.