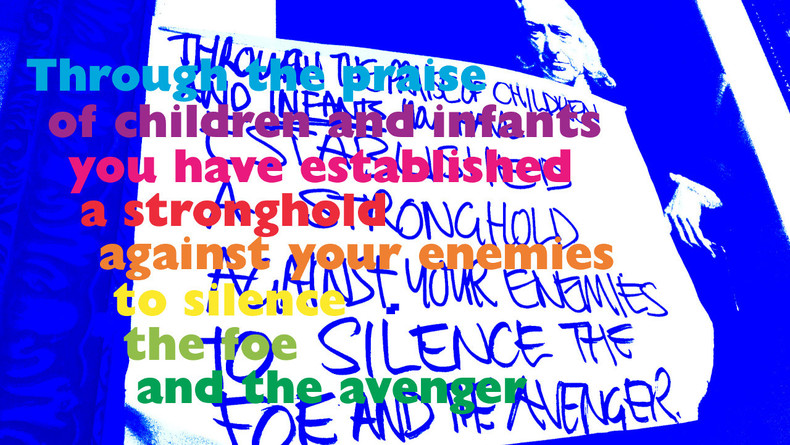 God... we need you. Open our eyes to how-much. You’re more willing to engage than we often believe, please make the most of us, of me... and invade with the love presence of you - The Holy Spirit. Conviction we know, can be a struggle - but nevertheless we invite this. You. And lead, oh kill the stupidity in us that thinks there’s a better way. And can we find a way to praise and love you back, In Jesus Name.

Missed the prayer at the end yesterday, so... sequence now, freed-up. Maybe top and tail the write-ups?

And the reading, should be ‘Passover’ today, (nb, will ‘do’ Passover, when next-up in a daily reading), but - “boom boom” - I’m going to... - because, m’thoughts are stuck in the one before and verses like this:

When thou art coming in unto the land which Jehovah thy God is giving to thee, thou dost not learn to do according to the abominations of those nations: there is not found in thee one causing his son and his daughter to pass over into fire, a user of divinations, an observer of clouds, and an enchanter, and a sorcerer, and a charmer, and one asking at a familiar spirit, and a wizard, and one seeking unto the dead. `For the abomination of Jehovah [is] every one doing these, and because of these abominations is Jehovah thy God dispossessing them from thy presence.Perfect thou art with Jehovah thy God, for these nations whom thou art possessing, unto observers of clouds, and unto diviners, do hearken; and thou -- not so hath Jehovah thy God suffered thee.

And the person who turneth unto those having familiar spirits, and unto the wizards, to go a-whoring after them, I have even set My face against that person, and cut him off from the midst of his people.

There’s a foe and an avenger. Their aim is to manifest and gain our worship. They - are invisible and active and for the most part, limited to people’s compliance. Room to act beyond this is rare-ish, accept in bringing sickness. In this, they obviously can’t as much as would, this relative to opposing powers of God ensuring this isn’t the case.

Do we all bring on our own woes? Yes and no, but firmly the later, in an unquantifiable randomness, genetic predisposition and our less than perfect living. O.T. peoples all accepted: do right/God does this back - do wrong/God does punish. This was partly true, as it is today but Christ ripped the curtain in two, the wall between us and God; bringing a new way. Reap and sowing still left to operate without God’s direct-hand and now reaching out for us to save (y)ourselves from... We do this, through the Cross, coming to the one who went on it - so we could. Be saved.

Therefore, pre-Christ-coming, the way to get the devil out the people was to kill the people. Only way. The hosts of hell need bodies. Our responsibility now, is to get them out - as far as possible - first and foremost, our local family, (this for believers is called/lucky enough to be near a suitable one - ‘church’).

If someone, regardless of anything but the desire for deliverance asks/us/we, should bring about - their - release. God through us. This is the good news.

I won’t go on - and on. I’ll probably comment further here - I trust - in a few hours and recently did here.

On to what I would say about this - and God might (?) Due to reasons I’ll leave considerably unexpanded: ‘Satan’ - the term, the word, corresponding history, and to a degree ‘Satanists’ is widely-believed - way more-so, than God in Christ. Fact. Even to virtual atheists suggesting there’s a mind-unseen behind evil-seen. This all goes to explain a God-absent or can be, nebulous in the background, ‘universal love-force/s’.

Satanists (...that's the way it goes, even though the well-meaning and relatively harmless will use this tag) and/ism: Is, the root of all evil and the NWO lot, full-on disciples.

This is surprisingly less challenged than you'd expect by materialists. Certainly given a wide-birth by esoteric and those agnostic about more defined traditional Christian theology. Of course I welcome either. Dismiss or considered? All represents an express train to evangelism and I’m only too happy to oblige.

I woke this morning to this comment. One of the popular takes. Again and again ideas and evidence, fitting a variety of somewhat competing yet overlapping claims. In the main, a handful or so of different streams of thinking. What can tend to happen, is the writer/speaker, feel the need to attack the other ones. Not the view/s, which is totally credible and has a place, (although more and/also -less- either/or, might be in order) - but, the person behind the alt. perspective, seen as an enemy. Not wrong in their mind but some Trojan Horse, in some ‘midst’ that barely exists. Sends less-exercised truth-seekers running to ‘delete bookmark’.

Zionist or Jesuit? This a squabble. Actually, it’s all about-Jews -or- this and that and not so ‘that’.

For me the three fixed cities in cities are the physically symbolic ‘covens’. Especially the money-one. The rest I’m... let’s say, ‘working-on’.

Satanic history isn’t people or secret-society specific, it’s in all of them, more or less. That said I’d set out my table with booklets and tracts, that it’s/their aim to deflect from a more integrated scope of understanding. With one distictive-ish priviso; Two bullseye places to perverse-into most. Church and Empire. Religion generally, i.e. beliefs/transcendent and politics i.e. big business the bit-wider aim. Therefore hundreds and thousand and hundreds of... praying in The Holy Spirit ones and, a few of the bigger-billionaires with those we know, and those we don't, who do their worst in controlling the premier empire-builders. Airs to the billions. And currency shapers. And the rest of their arsenal of death. A cult. Cult, of and for, Satan.

And yes, we should use the S word. Suits them, although in their broader Luciferianism.

Of course all I need is impetus to pray. And enough data to prophecy rightly. I consider the ‘research websites’ that I inhabit (all four or five of them), are here for the good-news and info to pray-war and worship God about.

Here’s my close: infants and children silence the enemy. Because? They rely on someone in life - in an ideal world - to live. Child-like, God-facing ways is poison for the poisoners. These sick-dousing voices, that not only form a backdrop to media saturated society but tailor one-to-one lock-downs as far as.

We do a crazy thing like sing a hymn or song about/to God, read Bible, talk to God, declare words of truth... the volume, and corresponding works, decrease.

God loves. God does not hate us. Loves “you”. And those seeking truth and light, God is able to move towards. Can’t believe Jesus? (yet) - don’t necessarily try to reform any religious-ways for the sake of... But do whatever is open to God - more than not. Better open to Jesus, than anything else... even if intellectually there’s all the no-no’s. A chance is a chance. Don’t try to earn 'God' but reach out, wherever you’re at. And just see? Could God... be - here? In the room or wherever you are. A sense of ... to bible verses lighting-up a little? Some, “that’s odd” happenings? Small signs. Someone’s attentive - about you.

God, I pray for all readers in Jesus Name DELIVER them... In Jesus name